Here's wishing everyone a very merry and very blessed Mabon. :)

I couldn't let the Equinox pass us by without sharing Scratchy the Scarecrow. (As named by ravenoushair!)

Here's the bit you saw already: 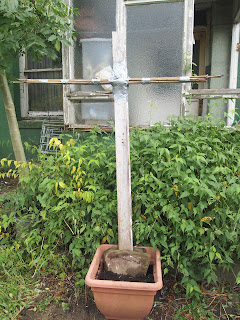 That was on Thursday. On Friday, I put the whole thing together. Here's what Scratchy looks like today: 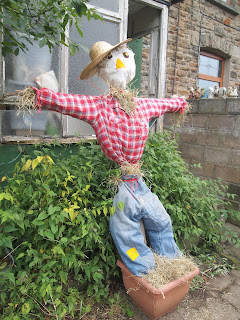 When I made Jay go out and look at it, he said, "You scare me, you know that?" I think that means he likes it! :D

Actually, he said later that he quite liked it and that it looked a little bit like The Scarecrow from Wizard of Oz. So Scratchy even has Jay's approval!

And you know the BEST part? I didn't spend a penny putting him together. A lot of times I see stuff on pinterest or craftster or where ever and I think that I'd love to do it but I just don't have the money. But Scratchy was made completely from stuff I had laying around any way: old wood, old clothes, stuff buried at the bottom of my stash box, and a bag of straw we had because of the chinchillas.

I hope this inspires you to get out and put your own scarecrow together in honour of the day! :) Actually, I hope it inspires you to go out and do something, anything crafty today. Get creative - get creating - because nothing is witchier than the magick we weave with our own hands!