A Snake for St. Patrick

Tomorrow is March 17: St. Patrick's Day. A day held sacred mostly by raucous Americans who see the day as nothing more than an excuse to kiss random people, dress in lurid shades of green and drink as much beer as humanly possible while parading wildly in the streets. But who was St. Patrick? And why have a day in his honour?


St. Patrick - although it's very likely that his real name was actually Maewyn Succat and Patrick was a name adopted much later - began his life as a pagan. He was born sometime around 387 A.D. in either Scotland or Wales. This is an educated guess, of course. The exact dates and location were swallowed up by time - and the Irish love of exaggerated (but not necessary accurate) story-telling. Much of what remains of St. Patrick's life and death is a combination of myth and conjecture - but here it is, such as it is: 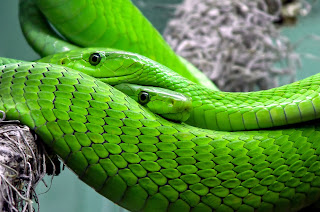 Patrick was about sixteen when he was stolen from his home by a band of Irish outlaws and sold into slavery. He spent the next six years under the control of a master known as Milchu whom history remembers as a Druid High Priest. Milchu taught Patrick the ways of the Druids and the young man learned to speak Irish Gaelic fluently during his period of captivity.

It's easy to imagine a frightened 16-year-old boy growing to hate his gods for such a fate. Your gods have let you down, torn you from your home and delivered you into the hands of people you consider barbaric because of their treatment of you - people who hold similar beliefs to your own. So who do you turn to? Well, the first new god that comes along, of course!

When Patrick made his escape after six years of slavery, he made his way into the land of Gaul (now France) where Christianity was widely worshiped. Patrick, studying under St. Germain who was then a Bishop, embraced the Christian god as his saviour. Historians say that he spent nearly twenty years under Germain's tutalige. He first became a monk then was later promoted to priesthood before being sent - with St. Germain - back to Britain to convert the natives.

I don't find it surprising that Patrick would arrive back in the land of his captivity with a passion to eradicate everything that reminded him of his time of slavery. He was, after all, obviously scarred at an early age. I don't condone it either, however. I accept that Hitler had a disturbed cildhood, which possibly lead to some of the resentment-driven decisions he made later in life. But he was still a "mass murdering fuckhead" (thank you, Eddie Izzard, for that one) - if you catch my drift.

Some might take offense to my suggestion that St. Patrick was nothing more than a common-place murderer. However, that decision was made by history, not myself - I simply present it to you in the most direct way possible. Because Patrick spoke their language and could twist the facts he knew of their pagan beliefs, he was able manipulate many of the locals into converting. The rest? Well, the rest he converted to Christianity the old fashioned way: by the blade.

Legends say that St. Patrick arrived in Ireland like a hero, driving all the evil, nasty snakes away. Fact says that there weren't any snakes native to Ireland at that time in history. The word "snake" has always been a euphemism for pagan. Most pagan religions honour snakes as symbols of eternity, most Christians see them as evil creatures (Garden of Eden, etc.) so it's not that hard to work out the correlation. 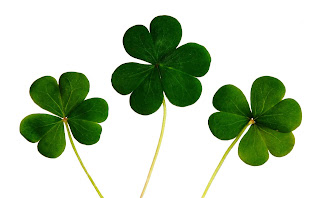 While the rest of their neighbours and friends are dressing up in green, as leprechauns and the like, modern-day pagans are pinning a simple snake pin to their chest as a silent protest of St. Patrick's bloody sweep across the Emerald Isle. Many will not even adorn their bodies with the three leaf clover (or shamrock) that is so popular on this day, believing it to be his symbol. (It is said that Patrick would often wear a shamrock on his person, believing the three leaves to be a symbol of the holy trinity: the father, the son and the holy ghost.)