You know that I am, and have been for years now, a Pinterest junkie. It's been one of my favourite sites and I've spent many hours there. But yesterday Pinterest really let me down.

This is the email I received:

I'm sorry to say that we had to remove one of your pins from Pinterest. The reason is, it looks like the pin may have had nudity on it.

The pin was called "Witch riding the proper way, with the besom in front." and it was on your board If the Broom Fits. Could you please remove any other pins like this from your account?

Right now we don't allow nudity on Pinterest, because a lot of people use our site at work and around their families. We’ve outlined all this in our acceptable use policy.

If we made a mistake and your pin didn't have nudity on it, we're really sorry. Please let us know so we can keep improving our process.

What is this shocking image that just had to be deleted? Brace yourselves, people...

Are the kiddies and elderly women locked away? 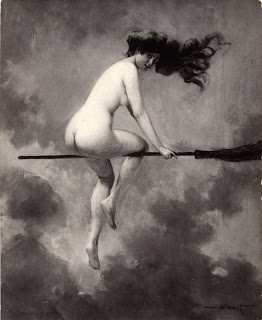 Get the fuck real, people. If that offends you, you don't deserve to exist in society. That's a BUTT, for the love of the gods. A BUTT. We all have them. Mine is slightly larger than yours, probably, but otherwise exactly the same. It's hardly offensive or something I would be ashamed to show my children. (And, by the way, children are happy to walk around starkers; it's only adults who teach them that it's wrong. But that's a different post...)

The thing that really annoys me, though, is that boards like this, this, this, or this are perfectly okay - and some of those men are showing much more skin than that witchy lady! But... Maybe that's the problem. Is a butt really that offensive? Or is it the fact that it's a female butt? Or... Is it because it's a witch's butt that it's so dangerous to the families trawling Pinterest together? I wonder.

I would like to think that the fact that it's a picture of a witch on a broom (nary a wart to be seen) is not the issue. I hope, for the sake of humanity, that it has nothing to do with the reason it was deleted.

But is it any less annoying if it was "only" deleted because it was a female butt? That pisses me off every bit as much because - HELLO just look at all that male flesh on offer on Pinterest. That seems to say to me that female bodies are bad but male bodies are good. I cannot even begin to count all the ways that sentiment is wrong.

Do a quick search on Pinterest now. Use "male nude" as your search term and see how many wangs you get. Now do the same for "female nude." Plenty of tits. So... How about that no nudity rule, eh? Now just search for "nude."

Whoops! So either Pinterest arbitrarily enforces their no nudity rule or their anti-nudity bots are crap. (It lends credibility to that whole maybe-it-was-deleted-because-it-was-a-naked-witch thing, though, doesn't it?) Or... I don't know, maybe someone reported me?

I'm dying to know exactly why that particular photo was deleted when Pinterest is otherwise so full of wangs and tits. I think I feel an experiment coming on. Is it worth getting my account blocked for? Hmm....
Posted by Wondra at 09:01