Me: Today, we're going to be talking about the legend that is Tony Todd. Wanna give me an introduction?

Jay: I first became aware of Tony Todd in the remake of Night of the Living Dead. After that, Candyman. Since then, a myriad of horror movies. 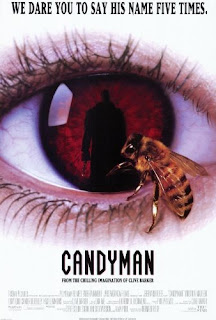 Me: Tony Todd is capable of giving this look that's straight up chilling. What makes Tony Todd stand out for you?

Jay: Not a look, but his look. He's big, he's tall, and he's imposing. To look at, he's terrifying but, really, he's the nicest, kindest man you could hope to meet.

Me: Is that why he's on this list? His look?

Jay: It doesn't hurt but, no. There's more to it than that. It's about volume and quality. Tony Todd is an actor who has become a horror stalwart, like the Christopher Lee or Peter Cushing of old. Tony Todd is synonymous with horror.

He has a strong onscreen presence but you don't have to see him to know who he is. That voice is unmistakable. Listen in Final Destination 3 when they're approaching the one ride and you'll hear it.

Me: Which is funny because he's done a lot of different things. I mean... he's even done The Young and the Restless! Aside from horror, what do you remember Tony Todd from?

Jay: I'd have to say Star Trek. Do you remember those episodes?

Me: Which Star Trek? Because didn't he play grown up Jake Sisko in Deep Space Nine?

Jay: He did, but I meant Next Gen.

Me: Wow. I'd forgotten about that. I feel like we should watch those episodes again but, first, we should get back to the horror.

Jay: Right. Tony Todd plays a great villain. He usually plays a villain, rarely the white hat. Night of the Living Dead is a notable exception.

Me: Would you say that's your favourite Tony Todd film?

Jay: It is. Tony Todd's performance is spectacular. He's just a spectacular actor. As Ben in Night of the Living Dead, he eclipses Duane Jones (the original Ben) by miles - not because Jones is a bad actor (he's not) but because Tony Todd is better.

Me: Are there any other roles that you really liked?

Jay: Well, he's only in it for a few minutes, but Tony Todd's appearance in Final Destination steals the show. The look he gives the camera kills it.

Me: I like his cameos in the Final Destination films. It's good when you have a minor character that appears throughout a franchise. It helps tie everything together.

The Candyman films were some of my favourite Tony Todd films. The first one, at least. (The sequels were good, but not as good.) Did you like those ones?

Jay: The Candyman films were good. Different. I'm not a Clive Barker fan but, every now and then, he does something that surprises me. The Candyman was a pleasant surprise.

Me: You touched on it before but talk to me about what it was like to meet Tony Todd. 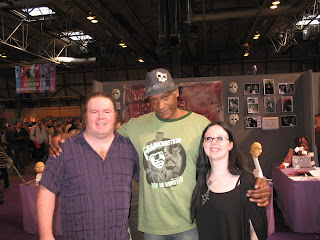 Jay: Tony Todd has always been a polite, respectful person, willing to discuss his films and even his personal life. I remember the despairing look he had when he saw him the last time. His daughter was just starting university...

Me: That's right! She was moving into a coed dorm.

Jay: You didn't have to giggle.

Me: I remember the look on my dad's face when he realised our dorms were coed. Hah.

Jay: Like anyone would mess with Tony Todd's daughter after they found out who her father was! I'd be scared shitless.

Me: Right? But, anyway, we're getting away from ourselves. We were wrapping things up here.

Jay: Tony Todd is one of our Best Horror Actors because of his strong onscreen presence, recognisable voice, and ability.

Me: He's an intense, sinister figure. I'm glad he made the cut.

Thanks for stopping by! Don't forget to check back tomorrow to see who our next Best Horror Actor will be!