Omg. I love Jay so much. He was an absolute ANGEL the whole time Lindsay was here. He was so attentive and sweet. *sigh* I don't know how he can be so good to a hag like me sometimes. Lol. He kept offering me his seat and making sure we had a few minutes alone together and things like that.

Well, things turned out to not go very well with Lindsay. *sigh* I guess it's my fault because I didn't really know her all that well, really. 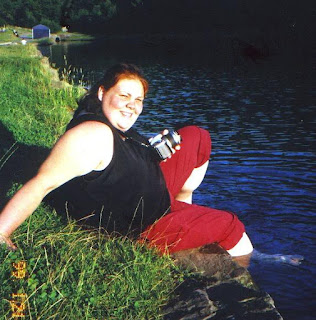 Everything was cool until Wednesday morning when Lindsay flipped out over her roommate keeping her dog rather than dropping it off at a neighbours. (Long story, I'm not going into here.) Well, she totally freaked out about it.

Here's one of the things that bugged me: I was like, "Listen, you really shouldn't be saying such nasty things about your friend. What if she's hurt and just couldn't do what you asked her to do? How would you feel about calling her names then?" And Lindsay said, without hesitation, "Well, that's not my problem right now. My dog is my priority." Whoa. I'm sorry but that's not good. And then she spent hours bitching at me about it, like it was MY bloody fault.

On the same note, Jay got up about an hour after she started raving about her dog. He said good morning to her and she totally blanked him. Well, he said goodbye to her before he left and she blanked him again. That really put him off.

Okay. And here's another thing that bothered me: I told Lindsay it was okay for her to call her mum the night she arrived to say she was okay. I did NOT tell Lindsay it was okay for her to just walk up and use the phone to call America any time she wanted without asking. Which she did. I also told her it was not acceptable under any circumstances to call a mobile because it would cost us a FORTUNE. Which she did anyway. Without asking. *sigh* I'm sorry but that's down right RUDE. Plus, who do you think will get stuck with the bill?

Sue took us shopping at Tesco on Wednesday and we all piled stuff into the cart and paid together so that we could all use Jay's discount card. Well, Sue bought a whole bunch of food when Lindsay arrived and cooked for her and even made a special trip to pick up Diet Pepsi when she ran out. Plus, she saved her like £2.40 on her groceries with the discount card. But, Lindsay still made her pay her back for the £1.50 worth of groceries that Sue actually bought. That put Sue totally off.

Well, I tried to keep a happy face and not let it bother me. You know - if you know me at all - that's not my forte. But I did. I tried to have a good time.

I went to help her move all her luggage down to our house and she told me to carry her suitcase without a handle or wheels while she took the easier cases. Again, rude. Then, on the way to the train station, she did nothing but bitch at me. The bus ride was too long, her suitcases were too heavy and WHY DIDN'T I KNOW EXACTLY WHICH PLATFORM SHE WAS LEAVING FROM? Then, when she started to get on the train, she just looked over her shoulder, said, "Bye," and the door closed behind her. No, "Thanks for paying $280 to put me up for the week and $100 to pick me up from the airport.." No, "I've had a great time, can't wait to see you again!" No. Just, "Bye."

She hasn't even called or emailed to say she was okay.

Jay and Sue are both up in arms about it. I'm just bummed. I thought I'd have the chance to build a friendship, you know? I guess I'm a worse judge of character than I thought. She was the nicest person in the world until things didn't go her way and then she went all Linda Blair on me.

I was suppose to go see her for her birthday and she was suppose to spend Halloween week and Christmas week with us. I don't think either of that will happen. I'm really disappointed. And I kind of feel like I've been made a fool of. Jay and Sue keep saying that she took advantage of me at every turn. But it's not just that. It's a week + £300 that Jay and I could have used to, you know, spend time together.