I CANNOT believe the stupid, arrogant bastard at the post office. He flat out refused to weigh a package for me.

"Weigh it yourself, I don't do charity," he told me. Just refused.

Why? Because he'd "lose money." Lose money? How? Lazy fucker.

So I was like, "The other post offices don't have a problem doing it" and he was like, "Go there then." I demanded his name so I could file a complaint against him and he refused to give me that. That lazy bastard.
Posted by Wondra at 17:16 No comments:

Lookie what Katie sent me!!!! 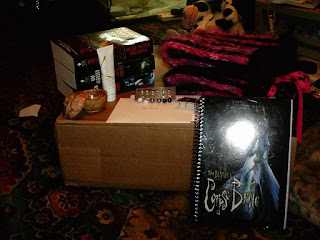 I especially love the legwarmers! :)

Wow. Three days off work is really nice. Jay took me into Cardiff to go shopping on Sunday even though he really wanted to stay in bed. (And that's why I love him!) I can't believe I spent £17 on mascara. I'm so sad...
Posted by Wondra at 19:39 No comments: