It's horrible to say, all things considering, but we had a good Christmas here at the Vanian house. We slept in, opened pressies, watched telly, visited the MIL and BIL and opened more pressies, played CoD, ate lots of junk food and had a few adult beverages, watched more telly and fell asleep together on the sofa. We both got loads of stuff we wanted - and, of course, the odd thing or two that wasn't so much what we wanted - and got to spend the day pretty much alone - which we haven't done once in eight years.

Sucks that it had to be because his mom has cancer, though.

Anyway, Did I share my presents with you yet? Meet our two new kittens: 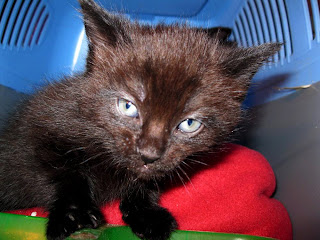 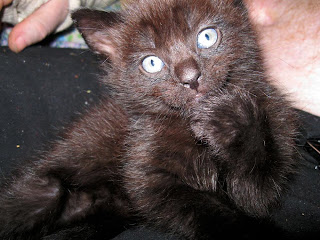 One is a biter and one is a cry baby. Naturally, I called them Damon and Stefan. :) It's hard to tell them apart at the moment unless you pick them up. Damon is very cwtchy and loves to be with you but Stefan is a loner and doesn't want to be held. How apropos, right? Lol.

Willow hates them but Willow hates pretty much everyone and everything. Thankfully, they're already litterbox trained and they aren't big enough to do too much damage to the tree! 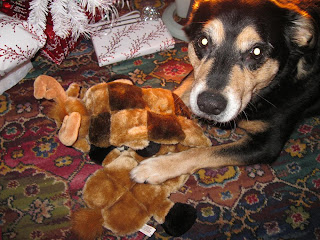 Sweep enjoyed his present this year too. We got him - as a joke - a reindeer with a rattle in his head and sixteen squeakers. (The MIL yelled at me everytime I bought him a toy with a squeaker so this was suppose to make her laugh. Which she did when I told her about it. She even called me a "little bitch," just like she would have if she'd been home to see it.) He also got a giant rawhide bone. Watching him open his presents was funny. I had to tear a little piece open but once he saw what was inside, he couldn't wait to get in it.

Who would spend the holidays with pets? Lol.
Posted by Wondra at 11:50