This Saturday the DH and I went to Memorabilia at Birmingham NEC. Memorabilia is definitely my favourite of all the conventions we attend each year because it's close to home (less than two hours), easy to get to and less crowded than the others. 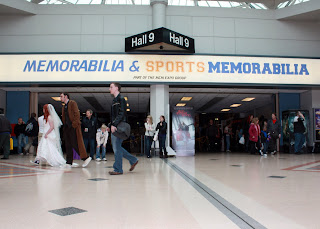 But Memorabilia isn't as great as it use to be. Since MCM Expo have taken over, some things have changed - for the worse. The calibur of the the media guests, for one. They tend to be mostly B list, British stars now, as opposed to the Hollywood stars they were getting before. And since the cost of renting a vendor table keeps going up and up, the stalls have become smaller and less interesting.

One of our favourite vendors, Monkeyboy Toys, was there. They're my (LDD) dealers. ;) I had a wee trade to make since I had an extra NoHell exclusive that needed a home and came away with the Red Hiding Hood and Big Bad Wolf set. (Plus exclusive.) Win. 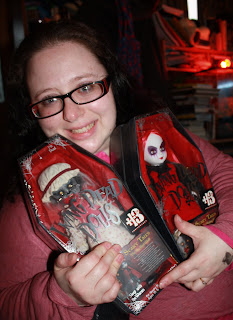 The decrease in vendors didn't stop us from spending way too much money, of course! We just couldn't resist the candy stall (Nerds and Jolly Ranchers - yum!) and bought ourselves each a great big Mountain Dew from Japan which, by the way, tastes very strange. It's like the American one but with less sugar. 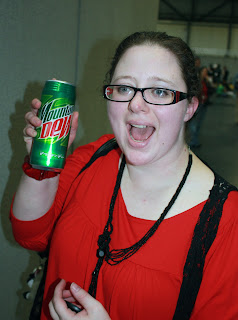 Plus a couple of DVDs (of course) and a couple of cuddley toys for the mister. (The dog is called Sweep - he's the puppet our dog is named after - and, well, if you know Mr. Vanian, you know the why the Captain Caveman is funny.) 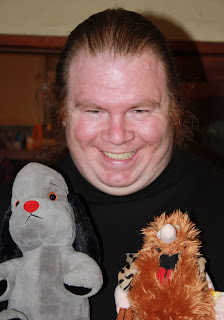 Actually, we spent more on goodies this time than we did on autographs. That's unusual for us. Part of the reason for that is the meidocre guest list but it's also partly to do with the fact that we've already met most of the people there! (Like the 'Allo 'Allo cast.)

Speaking of 'Allo 'Allo... There was just one member of the cast that we hadn't met and that's Francesca Gonshaw (Maria). I don't think she cared for me much, if I'm honest. When I selected the photo that I wanted her to sign (One that was a bit on the nude side), her words were "Oh. That's interesting." Interesting? 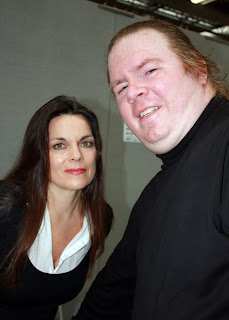 Christopher Ryan (Mike from The Young Ones) was only slightly chattier. We were talking about the next convention that he's due to appear at - one that we've been to many, many times - and I said, "It's good fun!" His reply was "Oh. Is it?" 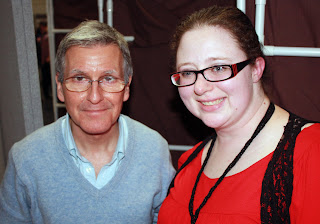 Maybe it's because my job is to talk to people... Or maybe it's because THEIR jobs are to ACT... But I always think that a celebrity at an event like this should make an effort to pretend to be interested in what you have to say. It's only five minutes out of their lives, after all, and they're being paid well for it.

But that's just me being bitchy.

Anyway... We also met Lana Wood who was Plenty O'Toole from Diamonds are Forever. SHE was chatty. I had the feeling she would have spent the whole afternoon chatting if we'd wanted to.

There was also Mary Collinson who was one of the twins from The Twins of Evil and Linda Hayden from Taste the Blood of Dracula. I love the old horror actresses, I really do. (Even though I sometimes wouldn't recognise them without an old photo. Lol.)

I could ramble all night about it but it's well past my bed time so I'll try to sum it up quickly: We took our time going to Birmingham, had a blast and took our time coming back then finished off the day with Chinese take-away. Fabulous times.
Posted by Wondra at 00:47 1 comment:

Today, Ostara dawned bright and beautiful. The sun was shining, the day was cool but not cold and the sky was blue. I couldn't think of a better day to celebrate the Spring Equinox.

For most people, this is a time to plant seedlings, getting their gardens underway. If you know me, you know that my green thumb is... Well... Black. Lol. I'm useless in the garden, no matter how hard I try. So Ostara holds a different meaning for me.

For me, Ostara means two things: the Goddess wears her Maiden guise and the Earth is (finally!) in bloom all around us. Instead of planting seeds, I'm planting good vibes and positive changes. I've been going through a bit of a hard time lately - and it can become all too easy to dwell on the negative things in our lives when darkness blankets the Earth. Now that the blanket has been shed, it becomes easier to see the good things in life: the little wild flowers that have just started to poke their heads through the ground, the March hare that dot the fields, the toads that have finally woken from their winter slumber.

Sometimes it can be a bit harder to see the good things in our own lives, especially when personal tragedy blots our past, worldwide tragedy lingeres in the prsent and struggle hovers in the future. But being harder to see does not mean being absent. There are good things all around - if only we open our eyes to see them. And THAT is the mentality that I hope to nuture as the Sun returns and Spring spreads Her fingers through the land. Hope will be my garden and Happiness will be the seed I plant.

Spring has always been a time for the young, for lovers and for babes. I know it can be hard to remember at times but I am not so very old myself! I may be creeping up on thirty but I'm not there yet, dammit, and I intend to embrace my inner Maiden! I will cast aside the worries that threaten to age me prematurely and find the inner playfulness that I have forced into hiding. The Godess dwells within me, as She does within us all, and it's about time I shut up and listened to Her! Today I intend to do that with laughter and dancing and by generally "making a fool" of myself - exactly as a Maiden should! :)

So... Whatever you "plant," whatever you choose to nuture this Spring I pray it comes to you in abundance. However - with whomever - you choose to celebrate, I hope it is a joyous time. I wish for the Brightest Blessings of the Lady and her Consort upon you all.
Posted by Wondra at 12:52 3 comments:

Please don't wish me a Happy St. Patrick's Day. Although March 17th is a day of celebration for many across the globe, for me, and others like me, it is a day of mourning.

St. Patrick is known as the patron saint of Ireland but was not, in fact, even Irish. He was actually born in either Scotland or Wales and his real name was Maewyn. (Very Welsh, isn't it?) He was kidnapped as a child and sold as a slave to a landowner in Ireland during which time he supposedly started getting religious visions.

(Or was he just a really angry, abused little boy who wanted revenge on the people who made him unhappy?)

Well, eventually Maewyn got free and travelled to France where he joined a monastery. When he came back to Ireland, it was to spread the word of God to the Pagans - a task he accomplished through force, threats and death.

You may have heard the tale of how St. Patrick drove all the snakes out of Ireland. Did you also hear that many scientists agree that there were NEVER any snakes native to Ireland? Or how the snake is an age-old Pagan symbol? The snakes that St. Patrick supposedly drove out of Ireland were actually Pagans. (In Christianity, the snake is a symbol of all things evil and unclean - something St. Patrick would most certainly have claimed the Pagan beliefs and practices were.)

So you'll forgive me if I don't toast to the destruction of a religious system with green beer. What I will do is wear a snake in honour of everyone who suffered at the orders - if not the hands of - St. Patrick.
Posted by Wondra at 09:49 2 comments:

The MIL is still at the Royal Gwent Hospital, despite us being told time and time again that she would "be home any day now." They (ie: the lying, two-faced bastards with PHDs) ASSURED us that she would be coming home on Friday so we worked like mad to get her lounge emptied and get vinyl flooring laid AND I booked a day's holiday to be there to help out. Did she come home Friday?

She called every 15 minutes, I swear, just to have us tell her that no, her hospital bed had still not arrived at the house. An abulance was scheduled to bring her home at 4PM but at 4PM there was still no sign of her bed. THEN, she called us in tears (again) to say that the abulance drivers refused to bring her home anyway because the hoist hadn't arrived either and they refused to carry her up the THREE steps to our house without it. (We live in WALES. You know... Where the mountains live. You'd think the sissy-ass ambulance drivers would be trained for that but no, apparently not.)

So, the MIL is still not home and we're still waiting for the equipment to arrive. They say it'll be Tuesday now but we're not holding our breathes.
Posted by Wondra at 18:51 No comments:

I made a friend a couple of crochet-topped kitchen towels. Do you like them? 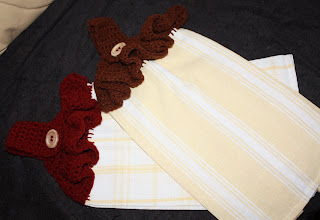 I used pretty much the same pattern as my first one - which, by the way, I'll have to post one day - but added a bit of a ruffle to hide my slighty uneven stitching across the top. 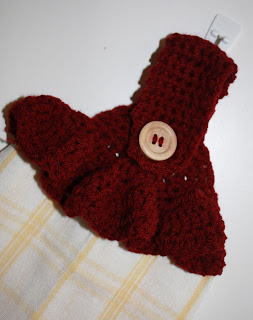 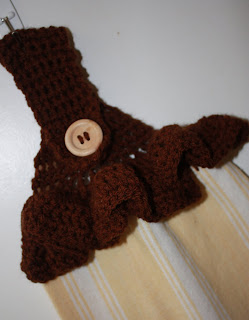