Book Review: Goddess of the Spring 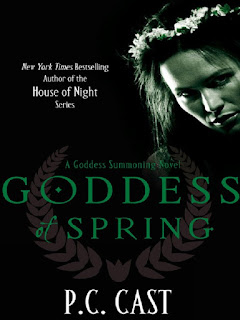 I have found the Goddess Summoning books very hit and miss. (Reading them out of order, naughty Wondra.) I'll love one, hate two more and then love the fourth. Strange. Normally, I either love everything written by an author or hate everything written by them. PC Cast is a very strange author for me in that way. It makes me slightly reluctant to read any books in this series but I'm glad I took a chance with this one.

Even as a child, I was interested in the Greek Gods/Goddesses and found their stories magical. Now that I'm an adult, I include these deities in my rituals and worship because they are the ones that feel most familiar to me, the ones that call to my soul. I guess that's one of the reasons I keep reading PC Cast's Goddess Summoning series even though I'm not always pleased with the results.

I've read several re-tellings of the Persephone-gets-kidnapped-and-raped-by-Hades-and-is-forced-to-become-Queen-of-the-Underworld myth. This was definitely the most delightful of them all. It was sweet and funny and romantic. And, yes, I actually cried.

The good thing about this series of books is that you don't have to read them in order. Each of the stories stands alone quite nicely but has good references to the other characters and plots in the other books.

One of the things that I love most about PC Cast's writing is that she always writes as though she knows her subjects inside and out - whether it's ancient Greek mythology, horticulture or cooking. I can't imagine how much research that must take. (Better her than me. Lol.)

But the thing that I dislike the most is that her characters are always immediately in love when they see each other. Personally, I would like to see a bit of conflict between lovers to start with. A little friction gets things off to a much better - and much hotter - start.
Posted by Wondra at 13:36