I got the idea for this, as always, from pinterest. It's so, so simple... 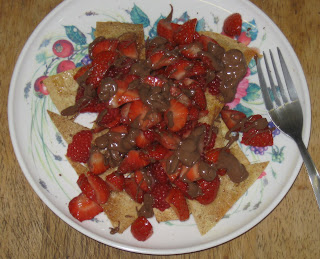 You just need fresh strawberries (I used raspberries as well but I wouldn't mix the two next time). Cut them up and put them in a bowl and dust them with sugar. Don't skip this step because you think, "Oh my god, sugar, I might die of fatness." Serial. You need the sugar because it makes a lovely strawberry syrup.

Brush a normal tortilla with some melted butter (don't wuss out on me now, skinny girls...) and then dust with cinnamon sugar. (I had to make my own because the stores around here don't sell it. Turned out just fine.) Then pop them in the oven until they turn a lovely shade of brown and start to get a bit crispy.

Now, all you need to do is pile the strawberries on top and finish it all off with a bit of melted chocolate or any kind of chocolate sauce. Fabness.
Posted by Wondra at 11:41 2 comments:

I just happened to glance at my weekly Top 10 from last.fm and I thought, "Oh my gods, I am such a freak." Lol. 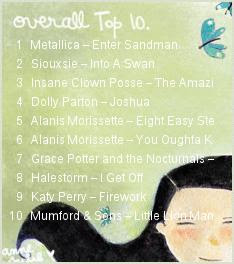 Metallica, Souixsie, ICP, and Dolly Parton? Those should never be seen - or heard - side-by-side. Lol.

Does it make you wonder what kind of scary things go on inside my head? ;)

So... I'm going to gloss over the my-mother-in-law-died-and-it-sucked stuff. That's for a different blog on a different day. Today I just wanted to share this: 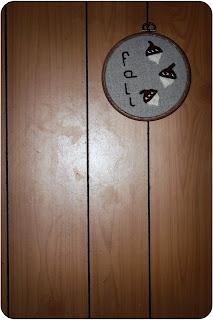 With my MIL gone, it leaves us with a big (for Britain) empty room. It started out as the MIL's lounge and then became her bedroom when she came down with cancer. Now, I have big plans for it. I'm going to turn it into a dining room/craft space. (A crafty dining room?)

I'm starting with a hoopla wall. It's kitschy, I know, but the house could do with a little creative cheer.

Not long before she passed away, my MIL gave me some money for being extra helpful and ordered my husband to take me to the craft store. I indulged in some linen (I never knew that stuff was so expensive!), thread and hoops. I've been wanting to get into embroidery more (I've only ever tried it once or twice) but couldn't justify the expense. Well, with no excuse and plenty of time (work gave me a week off), I decided to give it a go. 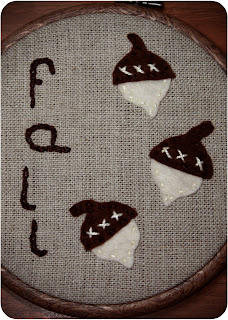 I know it's a bit early but I am NOT a summer person AT ALL and this is my rebellion against the humidity, bugs and sweat. :) (Sorry, Jess. Lol.)

All in all, I'm quite happy with how it turned out. I had to go back a bit and re-do the "a" because it was sloppy but hey, it was totally free-hand (or is it free-form? free-ball? no, not that one...) and it's not a craft I'd say I'm any good at.

Saturday morning I had to get up at 5AM for the Comic Con and finally managed to crawl into bed at 6AM on Sunday morning. It was a long and exhausting (and EXPENSIVE) day but we all had a great time so it was totally worth it.

I ordered a Gold Pass and pre-booked some photo shoot tickets to make things easier for us. Comic Con can get pretty crazy sometimes and you don't want to have to run around getting virtual queueing tickets if you can help it. Normally what we do is this: One of us gets a Gold Pass (it was my turn) and that person gets the VQ tickets while the others are waiting in line to gain entry. This usually works pretty well. This year, the boys had already gotten in and gotten their tickets by the time I managed to get my Gold Pass from the over-worked, under-fed crew member manning the information station. 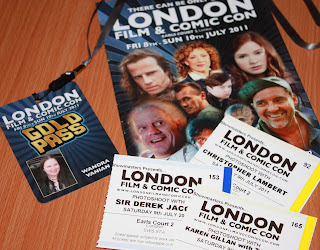 Luckily, it wasn't all that busy at that time since most people were still outside queueing to get into the building. (The boys bought Early Bird entry tickets, of course.) By the time we decided to take our first OMG-I-need-a-break-from-this-crowd break, the entry queue had already wrapped around the building. Needless to say, as the day went on it just got busier and busier and busier. It wasn't unbearbably crowded until about 2ish/3ish. 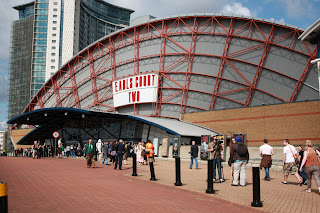 The venue as we got there - before it got uber crowded outside from all the people trying to avoid the crowds inside.

The organizers, Showmasters Events, make me a bit crazy sometimes because their events can be poorly laid-out and they normally have most of their main guests cancel right before the show. (I'm not exaggerating. I've been to a LOT of their events and these are common complaints.) The London Film and Comic Con has always been the one that had the best lay out. This time, it was even better. That's one thing I will say for Showmasters: They get better at what they do each year. (Which is surprising since we all know they can't take criticism. Post an unhappy comment on their forums and see how long it takes to get deleted.)

This year, there weren't as many cancelations as we were expecting which made us all happy. There were still a few people who didn't show up on the day, of course, like Aanna Shaffer and Beatie Edney but it wasn't too bad. Alyson Noel (an author) was listed as a guest but I couldn't find her. Either she wasn't there until Sunday or she pulled out, I never found out which.

Beatie Edney was the annoying one. When we found out that she and Christopher Lambert would both be there, we spent a small fortune getting an original Highlander movie poster to get signed. (They played husband and wife.) We still got it signed by Christopher Lambert but it's just not the same. Lambert was the big name for this convention. And, of course, the most expensive. Mr. Vanian was pretty annoyed because, when he handed Christopher Lambert the pen to sign with, he handed him an old one that should have been thrown away and the autograph (on both the photo and the poster) weren't as clear as they should have been.

Mr. Vanian had a photo shoot with Christopher Lambert and he was really happy about it. He said that Lambert was very nice and polite. When we met him together he was a bit rushed. I had photo shoots with both Karen Gillan and Derek Jacobi. It was a good thing I had the photo shoot with Karen Gillan too - her queue was ENORMOUS and it would have taken hours to get through it. We all looked at each other and gave an unanimous "fuck that" to waiting in line for autographs. 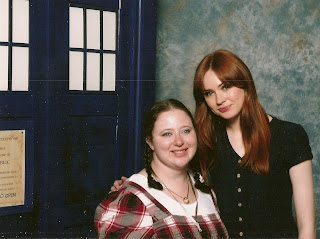 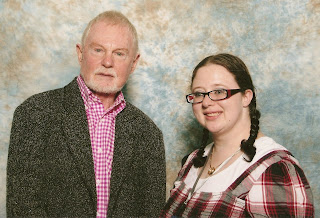 Mr. Vanian was a bit disappointed because they took so long printing the photos that he didn't get his back and has to wait for it to be sent out to us. Poor show when you pay £30 for it!

My Harry Potter and Twilight collections grew by one autograph each this weekend. Alfie Enoch (Dean Thomas from HP) and Charlie Bewley (Demetri from Twilight) were both in attendence. Alfie couldn't have been nicer but Bewley was a bit annoying. Charlie Bewley acted like he just wasn't interested but the second I stepped out of the way, he was all over the pretty girls behind us. *gag* 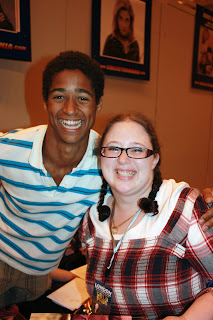 My FAVOURITE guests were Peter Jurasik and Stephen Furst (Londo and Vir) from Babylon 5. They were soooooo lovely. :) (And don't look a whole lot different without the make-up. Lol.) The crew member helping Peter Jurasik said he was the busiest guest he'd ever helped and I'm not surprised. Bab 5 still has a huge following - of course, from what I saw, they're mostly middle-aged men... ;) 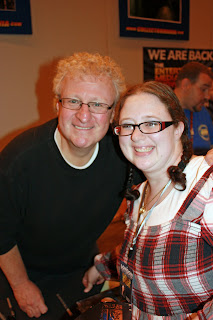 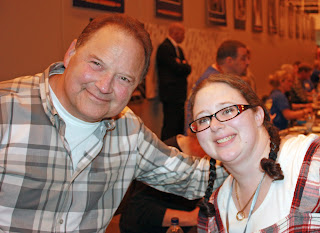 When we met Jurasik I couldn't believe how awesome he was. Then we met Furst and he was even more awesome. We had a nice long chat about where I was from and about how Wales isn't part of England. Mr. Rude Guy behind me kept trying to shove us out of the way but we just ignored him, even when he tried to cut between us to get to the desk. 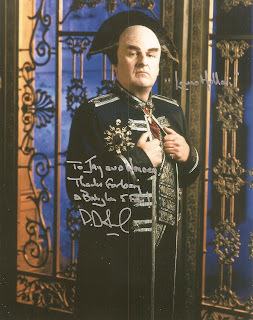 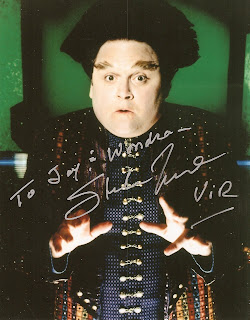 Mr. Vanian's favourite celebrity was Brian Tochi who, yeah, was freaking cool. Did I mention that Tochi played Leonardo in Teenage Mutant Ninja Turles? Sweet! He was so laid back and funny. He made the hubby's day by writing a quote he loved from Revenge of the Nerds on his photo. (It's slightly vulgar, I won't repeat it.) 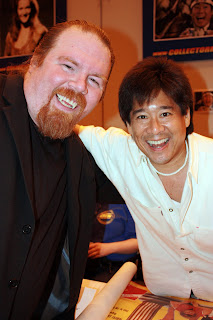 I think his second favourite was probably Sandahl Bergman who 1. was insanely skinny and 2. was uber polite. She introduce herself - as if we didn't know who she was - and even told us to enjoy our convention. She also told us that this year's Comic Con was the best ever financially for Showmasters. I wasn't surprised, it was THAT busy. 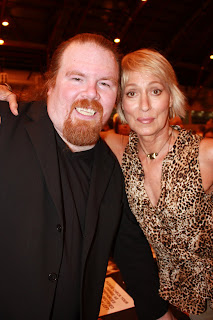 Mr. Vanian was wearing his fang veneers for the day (in case you missed it lol) and got a lot of attention. Shawnee Smith and Vivica A. Fox both made a fuss of him because of them - complete with biting sounds. That amused me.

We couldn't meet everyone we wanted to, unfortunately, because there just wasn't enough time. We had to give Morgan Sheppard and Richard Franklin both a miss. There were also a couple of guests that we missed because their queues never went down - Lea Thompson and Camille Coduri, for example.

The one that killed me not to get was Clive Barker. We paid for our autograph but when we got to his table, he got up and left. They told us that he'd had a bad accident and was in a lot of pain with his hands so we were like, fair enough. But we waited over 45 minutes for him to come back and he never did. I had to admit it was stupid to wait so we got our money back and left.

While I was waiting for Barker, the boys went and met Robert Knepper and Jeffrey Weissman.

One of the best parts of Comic Con is watching all the people in their costumes. Some of them are pretty outrageous. (With some of them, though, you're not sure if they're suppose to be in costume or if that's just how they normally dress!) This was my favourite of the day: 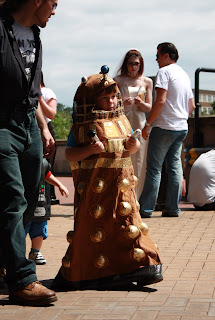 That kid was so cute he almost made me want to have a few of my own. Lol. (Almost.) There was also a teeny tiny Dr. Who that stood and had a chat with me about his sandwich for awhile. Where his parents were, I don't know. Lol. But when I saw him again later, I found out that his dad and two little brothers were also dressed as Dr. Who. Too cute!

It was a great show and we had a great time - and even managed to come home with money. Next time, I think we'll definitely book more photo shoots with the stars because Showmasters allows fewer and fewer posed photos each time. (Obviously a money-making gimick but you're not gonna beat them, right?)
Posted by Wondra at 10:36 No comments: 
I thought June's list would be a whole lot bigger but I did have exams at the start of the month. I already have a huge stack of books from the library to tackle this month as well as all the books I've swapped through readitswapit.co.uk. Glad it's summer vacation!
Posted by Wondra at 10:12 No comments: