I got a jar of Herman Cake (batter?) from a friend at work. (And a slice of her Herman which had chocolate chips in it.) She got it from one of our team leaders. (Apples and blueberries in his - yum!) clearly, I work with people who have exceptional taste! :)

Hermans are very needy cakes - you have to alternate stirring and feeding them for ten days before you can add your own bits and bake. They come with instructions that start: "Hi, my name is Herman and I'm a sour dough cake." Cake that talks to you and has to be fed? This appealed to the child in me!

I must admit that I'm just a teensy bit afraid of killing Herman. Both of the people who've done this before me are good at baking and, as you know, I'm a bit of a freak in the kitchen. It's either going to end in awesomeness - or tears. (Let's hope for awesomeness.)

I've already decided what I'm going to add if Herman makes it to day 10: bacon and maple syrup! I don't know if this is even possible but I have to believe that bacon will find a way! 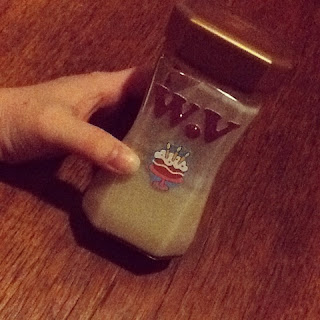 My jar of Herman - decorated just for me! 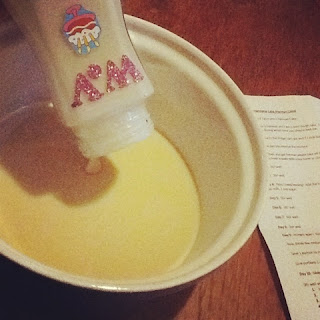 My Week in Words

It's been a long, long time since I've posted. I know and I apologise xamillion. This rollercoaster they call Depression has not been a fun ride. On the "up" days, I feel normal. On the "down" days, I feel... It's not even worth going into. I'm not going to promise to post more often - it's my damned blog, I'll post as often as I want. And for the people who do read and care, thank you. Sometimes just having one comment makes you feel like you're not alone any more.

Things have been about as bad between the DH and I as they have ever been. You know when you're standing at the entrance of a store and you can't decide whether you're in or just moving on to the next one? That's how my marriage feels right now. Indecision.

I met with my new therapist this week for the first time. It wasn't a normal session, just a psychological evaluation. My new therapist is a smart cookie. I noticed the words she casually slipped into the conversation: "Displacement," "isolation," etc. Yep. That's me in a nutshell. She isn't one to let you just moan and leave, though. She actually expects you to do the work too. (Actually do something to change my life? Scary.)

My therapist did something that made me trust her implicitly with my mental health: she wrote me a prescription for a book. There's a service here called Book Prescription Wales. It started a few years ago when the counselling programs weren't quite what they are today. Well, back then, they tested a whole bunch of self-help books with counselling patients and had them rate the books. Then the Welsh Assembly took all the highest ranking books and spent a small fortune to buy enough for all the local libraries. When your therapist writes you a prescription, you take it to the local library, hand it over, and they give you the book. There's no need to be registered and there are no late fees if you don't return it on time. Clever.

The book I was prescribed is called A Woman in Your Own Right by Anne Dickson. It's about being assertive and I've already found it helpful. It's teaching me that I have the right to say "I want." I have spent way too long huffing and puffing about the things that I don't like while feeling I didn't have the right to say anything about it but I'm trying to change that. I just need to find the courage to stick with it.

On top of that, I may have accidently come out of the closet this week. Here's a piece of advice: If you plan on making a smart ass remark on facebook about something that you assume everyone knows, make sure they bloody well know it. Because of the whole Obama, same sex marriage thing, I remarked that as a bisexual, I approved. Turns out most of my friends, family members and co-workers didn't know that I was bisexual, even though I've never hidden that fact. (And, actually, it has said it on my facebook profile page for many years.)

The outpouring of support (mostly from friends and collegues) has been staggering. The support from my family? Let's say non-existent. My sister promptly went ape shit and attacked me (yes, on facebook) not only for being bisexual but also for being a Wiccan and for being a Democrat. Oh, my many sins...

All of this who comes from a woman who has known Jesus for all of six minutes. The last time I saw my sister, she was two-timing her live-in boyfriend - who at the time she hated - with another man. (Neither one of them being the father of her children.) She was doing drugs and cussing her head off. But then she found Jesus and began Judging everyone by his law. *sigh* I'm not even going to go any further than that.

On top of all of that, tragedy struck our house this weekend. We were going out to a craft fayre ("I want to go to this craft fayre.") and while we were gone, Charlie the chinchilla escaped his cage. Unfortunately for Charlie, Dylan the dog is a natural hunter. I can't even begin to describe the horror of what we came home to. Needless to say, Charlie did not survive.

I'm dealing with a whole lot of guilt on this count because I was the one who didn't close the cage properly when I fed them. The DH says that it is also his fault because he noticed that I didn't close it properly but forgot to mention it. (I think he's just trying to make me feel better.) Dylan is also getting a lot of the blame - but shouldn't I be to blame for that as well since I didn't train him properly not to attack the chinchillas? Dylan has not heard the word "no" very often and he almost never gets punished but I think that's about to change. I think a lot of tough love is coming his way.

At the moment, the DH doesn't even want to keep Dylan. He calls him a killer and says that he wants to hurt him. (If you had ever seen the DH dote on this dog, you would know how out of character that is.) I think he's feeling a lot of additional pain because Charlie was his mom's chinchilla. With her being gone, and her ashes finally being scattered, I think he feels like he's loosing more of her every day. I try to tell him that Dylan is also a part of his mother (he was her dog) but I don't know how this is going to play out. At least I know one of our friends loves Dylan and would take good care of him if he had to.

The DH wouldn't leave Eddie the chinchilla alone in his cage, even for one night. He dragged me straight to the pet store before either of our tears had even dried. The pet shop owner knows us very well and gave us what I thought was a good deal on a female chinchilla who is a year younger than Eddie. We may even have baby chinchillas in the future.

We were trying to come up with a name for her on the way home and I said she had to be named after a bad ass woman. So we called her Maggie after The Iron Lady. She's the colour of cold metal and utterly fearless. Plus, I said, there was a Game of Thrones reference in it... We paid the iron price for her, didn't we?

So it's been a monumentally eventful week. I'm exhausted - but then, I'm always exhausted. That's the worst part of the Depression, feeling constantly tired. Even when I'm not phsyically tired, I'm emotionally and mentally tired. I just want this rollercoaster to stop so I can get off already.
Posted by Wondra at 15:18 1 comment: