I work in a call centre - which is basically a glorified office with too many phones. Anyone who has ever worked in an office knows that there's a certain pressure to get the whole Christmas card thing right. Although I've avoided it the last five or six years, this year, I thought I'd give the holiday card exchange a go.

After Wondra-izing it a bit, of course!

Instead of giving cards, I gave cardaments: 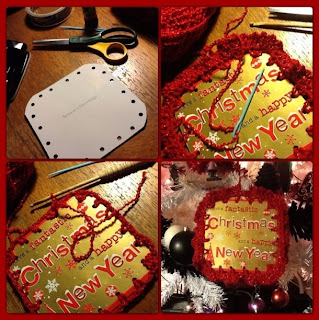 (Which is just a card that's also an ornament you can hang on your tree!)

These are SO easy to make! (Maybe I shouldn't say that?) Start with a card then open it up and cut it in half. Now glue the pieces together so you're looking at the front and the inside (with the message on it).

Round off the corners a little with a pair of scissors. Next, grab a hole punch and get to work. I put one hole in each corner, one on either side and one or two in between, depending on how large the card was. 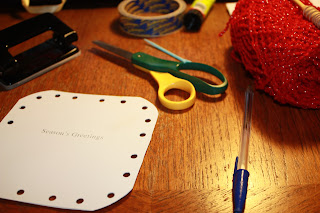 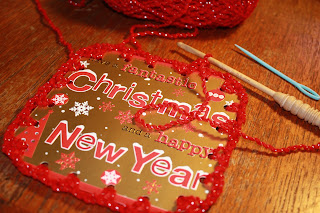 (The corners are different again. You just single crochet x2 into the chain space.)

When  you get back to the beginning, slip stitch into the chain space created by the chain 2. Chain 2. Single crochet into next single crochet.

Somewhere around the middle you want to make a loop so it can hang on a tree so just chain 6, skip two spaces and carry on. Slip stitch into the first chain space and sew in the ends. 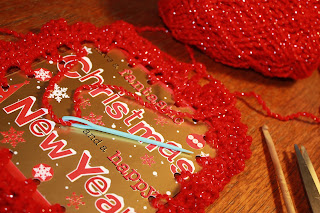 See? Simple. Shouldn't take you any longer than 15-20 minutes, start to finish. And it's fun! You can do it while watching your favourite holiday movies. (I did!) 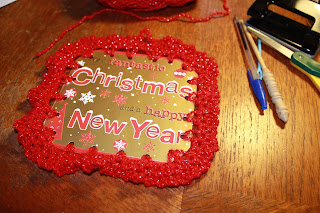 Jay worked it out that I made about 40 in total... So 40 times 15 is... Wow. I spent about TEN hours making these for my work colleagues. It would have been easier, no doubt, just to keep a box of blank cards on my desk and quickly fill one out when someone gave me a card. (Don't laugh, people do this.) But I wanted to make it a bit more personal... To let people know that I was actually thinking about them, even if it was just for 15 minutes, during the holiday season. 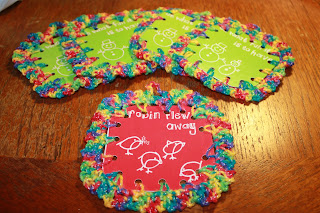 The downside was that I didn't get around to making any for my friends and family back home. I figure next year I'll have to start before Samhain. Or, maybe find a new way of saying "Hey, you're special." 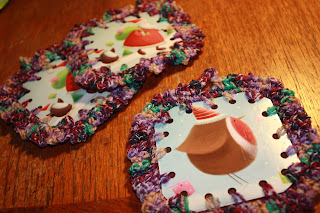 If that's the case, and I find something new to make next year, you can find Wondra's Cardaments in my etsy shop in time for the holidays, 2013! ;)