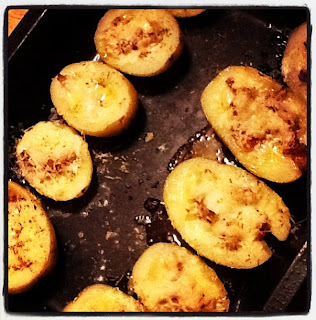 Super easy! I used half a dozen medium potatos, half a package of streaky bacon, half a cup of shredded cheddar, and a bit of butter.

I halved the potatos and tossed them in a pan to boil while I chopped up the bacon and fried it in a pan. Before they got too soft, I drained the water and scooped out the center of the potatos. A little bit of butter, salt, and pepper in the centers and then into the oven (it was 150 degrees C in a fan oven) while I did the dishes and caught up with my tweets...

Then I took them out of the oven and cranked it up to 180 while I stuffed the potatos. Back in they went and I left them there until the cheese turned a nice brown.

Not very specific, I know, but they turned out pretty well. You could just put them in the oven to bake without boiling first but I just didn't have the patience. A lovely snack with hardly any fuss!
Posted by Wondra at 00:10