I recently read J.M. Barrie's Peter Pan for the first time and thoroughly enjoyed it. Actually, I was surprised that I hadn't read it until now - I mean, I AM thirty, for Pete's sake! But then I remembered that while other kids my age were reading this, I was busy reading Dracula. (And every cheesy romance novel I could get my hands on.)

But now, as a student again, it's back to the classics and some of them have really surprised me by how epic they are. And some have disappointed me. (Voltaire, anyone?)

Anyhow... Back to Peter Pan. 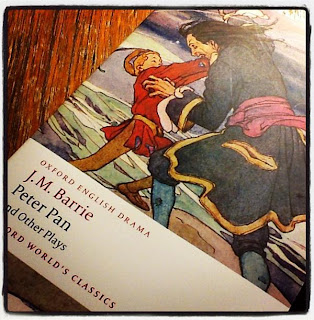 I LOVED this book. I mean in a crazy, read-it-in-about-an-hour kind of way. I just took hold of me and wouldn't leave me alone.

Would you be surprised to hear that I've never SEEN any version of Peter Pan either? Not even the Disney one! (This is going to be rectified with a Wondra style movie marathon very soon, trust me.)

It's like I was raised in a cave sometimes!

But the main reason for this rather rambly post is that I wanted to share some of my favourite lines from the book/play with you. Here we go...

Mrs. Darling: (when talking about night lights) They are the eyes a mother leaves behind to guard her children.

Peter: (when describing where he lives) Second to the right and then straight on till morning.

Peter: To die will be an awfully big adventure.

Hook: Split my infinitives but 'tis my hour of triumph!

Cookson: (after pirates start dying) They do say as the surest sign a ship's accurst is when there is one aboard more than can be accounted for.

Hook: Proud and insolent youth, prepare to meet thy doom.

Hook: I'll show you now the road to dusty death.

(About Mr. Darling's decision to live in the dog kennel) sorrow has taught him that he is the kind of man who whatever he does contritely he must do to excess; otherwise he soon abandons doing it.

Wendy: (describing her daughter) Pen cannot describe her, she would have to be written with a golden splash!

I think no one is surprised that most of my favourite lines come from Hook. I do love the baddies.

I included 'When Wendy Grew Up: An Afterthought' in this although I prefer the play without it. I think it ended in the perfect place and the afterthought was dreadfully sad. Even so, Peter Pan is my favourite book of the school year so far!