When winter came to Wales.

I've lived in this country now for nearly ten years. For the most part, the climate is very similar to the one I left behind in Michigan - with a few minor differences: the summers are more humid, it rains more, we rarely get thunderstorms, and it hardly ever snows. When it does snow, it normally lasts for less than a day.

Being from Michigan, I expect a lot more snow than that in the winter. I've often been disappointed.

But not this year!

This year all my snow dreams came true! 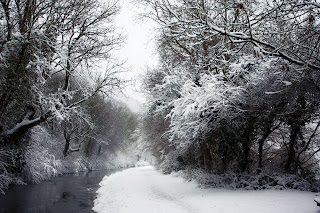 It snowed heavily for days on end this month. Six, to be exact - which was the number of days Jay and I were snowed in together. It was, for lack of a better word, awesome.

I tried not to be sad when the rain came back, driving all the snow away, but it was hard to go back to work after six days of couch surfing and playing Call of Duty. The next couple of days we had shocking weather: two of the mightiest thunderstorms I've ever seen here.

It was kind of awesome too.

(Anyone NOT worried about climate change?)

And now we're back to gale force winds and lashing rain.

I have to say that Blizzard 2013 really got me off to a good start for the year. I get really - REALLY - excited when it snows. (I'm like a child, honestly.) The sight of falling snow never fails to make me smile. So, although it was too brief, I am grateful for the snowfall we had this year.

(And in case you're wondering... I did have several accidents though none of them resulted in anything worse than a scrap. Snow without pain? Hooray!)
Posted by Wondra at 10:38