Being a writer means getting used to disappointment. Everyone who has ever taken up the pen has done so knowing that they have to have a hard shell, prepare themselves for rejection, blah blah blah.

Doesn't make it suck any less when it happens.

You may remember that I applied for a bursary from Literature Wales last year which, if I had gotten it, would have given me six months off to focus on my writing. You can probably guess from the title of this post that I wasn't successful. I got the letter informing me over the weekend. 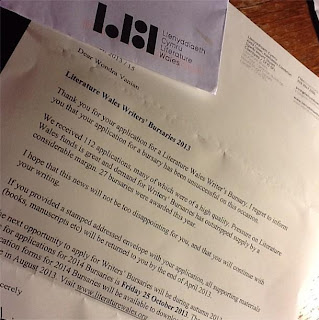 But it wasn't meant to be.

Knowing my... proclivity for bouts of Depression, I'm trying not to dwell, trying not to do that I-wasn't-good-enough-I'm-rubbish-why-do-I-bother-I'll-never-amount-to-anything-I'm-just-a-useless-screw-up thing. It isn't easy.

Jay says to look on the bright side: the one thing that was keeping me in my suckfest of a job is now gone and I can start looking for something better. (Or, at the very least, less soul destroying.) Not much of a consolation, though, is it?
Posted by Wondra at 10:37