Things That Make Ya Go...

A lot of weird things happen during Eurovision. That's part of the draw for (weird) people like me.

I've been watching Eurovision religiously for about six years now and this is by far the weirdest thing I have seen to date (even weirder than the singing grannys with their moving ovens):

I don't know what was funnier, watching this or watching Jay's look of absolute shock as he watched this.

Is it weird that I totally want to go to Sweden now?
Posted by Wondra at 09:00 No comments:

As you probably know, I've been taking a class called Children's Literature - not, as you may think, because it was "and easy one" but because children's literature genuinely fascinates me. I'm one of those cross over readers who enjoys a good children's book every bit as much as a smutty romance novel.

Recently for this class we studied the history of the Carnegie Medal. I wondered how many of the award winning books I've actually read so I visited The CILIP Carnegie Medal homepage to find out.

2001 Terry Pratchett, The Amazing Maurice and his Educated Rodents, Doubleday

2000 Beverley Naidoo, The Other Side of Truth, Puffin

1970 Leon Garfield & Edward Blishen, The God Beneath the Sea, Longman

1969 Kathleen Peyton, The Edge of the Cloud, OUP

1968 Rosemary Harris, The Moon in the Cloud, Faber

1962 Pauline Clarke, The Twelve and the Genii, Faber

1960 Dr I W Cornwall, The Making of Man, Phoenix House

1953 Edward Osmond, A Valley Grows Up

1950 Elfrida Vipont Foulds, The Lark on the Wing, OUP

1949 Agnes Allen, The Story of Your Home, Faber

1945 Prize withheld as no book considered suitable
1944 Eric Linklater, The Wind on the Moon, Macmillan

1937 Eve Garnett, The Family from One End Street, Muller

I don't deserve to call myself a bibliophile.

How many of these books have you read?

Here's an actual conversation I had with a waiter recently...

Waiter: What would you like?
Me: What have you got in the way of bourbon?
Waiter: (pause) Uh... (pause) We have Jack Daniels? That's (pause) like bourbon, right?
Me: (stare) Oh, honey... go away and send back someone who's old enough to drink.
Posted by Wondra at 09:00 No comments:

I had so much fun making these Iron Man mitts that I just had to make another pair. But, this time, I wanted to make a Captain America pair... 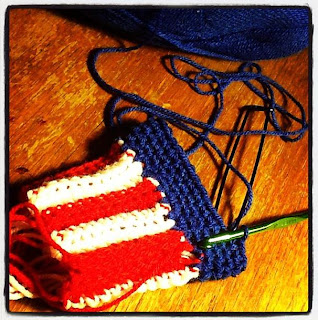 The pattern that I used for the mitts was good but a few small changes made it even better. I altered the way it was joined, removed some unnecessary slipstitches, and added some decreases and they turned out a lot neater. 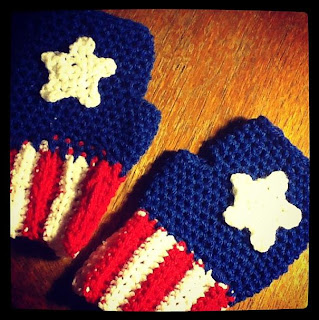 The stars were trial and error. Eventually I came up with a design that worked out the right size and... Ta da! Captain America mitts! 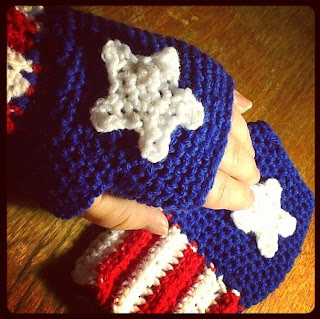 These are easy to make (maybe two hours, start to finish) and fit perfectly. The pattern works well for men and plus size girls but would be baggy on smaller people.

One of these days  - like when I've not got two assignments due - I'll work up the pattern to share.
Posted by Wondra at 09:00 2 comments:

Slow week. There were still a few really good memes - like this one and this one - and this one nearly won but here's this week's Meme of the Week: 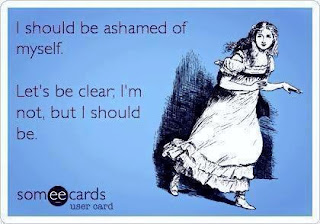 A Song for Sunday: Empire of the Sun - Alive

I'm not normally a fan of dancy electro pop. (If that's even a thing.) But this song I liked immediately:

I know next to nothing about the band except that (I think) they're from Australia. If you happen to like any of their other songs, I'm open to suggestions.
Posted by Wondra at 00:16 1 comment:

Email ThisBlogThis!Share to TwitterShare to FacebookShare to Pinterest
Labels: A Song for Sunday, dance, Empire of the Sun, music, music video, songs, You Tube

I'm kind of torn about this movie, though I definitely plan to watch it.


This is either going to be very good or very, very bad.

I like the concept: Earth has become hostile towards humans. (Long overdue, if you ask me.) The imagery looks fantastic. So why am I worried?

Because it stars Will and Jaden Smith. A whole movie centered around a real life father and son pair? That just seems like it can become totally over-the-top and emotional.

The action scenes had better be epic.
Posted by Wondra at 09:00 No comments:

I went to see Iron Man 3 this past weekend and these just had to be done in honour of the event: 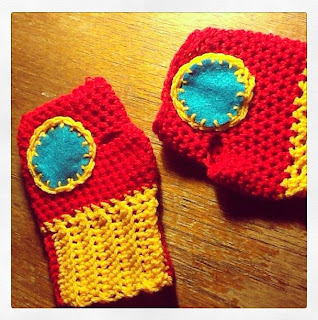 I used this pattern - with a few alterations. I forgot to pick up blue yarn so I just substituted felt for the power circles. Yarn would definitely have looked better. 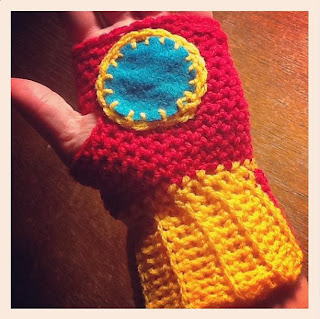 I also joined the cuff together using a simple slip stitch, which I think worked just as well. The only part of the pattern that I didn't really like was the slip stitch at the top of the glove. I think reducing would have worked better.

This is a very good pattern, though, overall. I'll probably use it again in the winter.
Posted by Wondra at 09:00 No comments:

A Day at the Pictures

As you know, I went to see Star Trek: Into Darkness on opening night and I absolutely loved it. 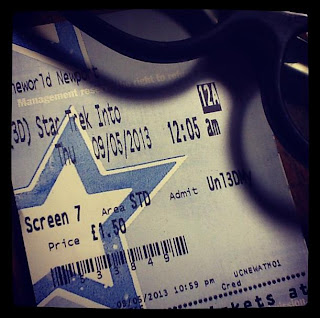 Actually... I loved it so much I just had to see it again. Right away. It was murder to have to wait until the weekend.

I won't say too much about the film itself - except that it made me bawl like a bitch - because it's not out yet in America. I will say that if you are a Trekkie or a Trekker or just love sci-fi, you have to watch this. In fact, I plan on going to see it again very soon!


I've been waiting awhile now to go see Iron Man 3. Believe it or not, I haven't seen Iron Man 2 yet. No reason... Just haven't gotten around to it yet. (Seriously. My To Watch list is worse than my To Read list.) But Jay didn't like it and it made me wonder how good the third movie could be. Reviews were good, though, so I decided it was worth a go.


I'm kind of torn on this one. Firstly, I hated the ending. Hated it. I get why it needed to end that way but it sucked. Also - as much as I love him - Robert Downing Jr can't act well enough to pull off an anxiety attack. It was too emotionless. BUT watching 40+ Iron Men kicking ass was pretty sweet. It was also good to see Penny kicking some ass.
Posted by Wondra at 09:00 No comments:

This week I went for the LOLZ: 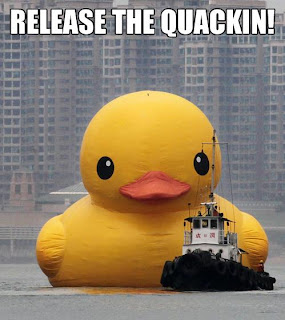 A Song For Sunday: The Heavy - Curse Me Good

I spent an hour or so this week clicking through random videos on You Tube. That may sound weird but I've found some great music that way. This week was no exception. My favourite of the songs I came across was "Curse Me Good" by a British band called The Heavy:


I'd never heard of the band before but now I'm totally a fan. They've got a great rocky soul sound that makes me want to move.

The music video is old school. It makes me think of the likes of Hootie & the Blowfish. Actually... I can see me having a playlist with both bands in it.
Posted by Wondra at 11:47 No comments:

Email ThisBlogThis!Share to TwitterShare to FacebookShare to Pinterest
Labels: A Song for Sunday, Curse Me Good, music, music video, song, The Heavy, You Tube

A Day at the Pictures

Jay has been promising for some time now that he would go and see a movie with me. (He's more of a watch-it-at-home kind of guy, whereas I'm a I'd-be-at-the-cinema-every-day-if-I-could kind of gal.) He doesn't particularly want to go see Star Trek: Into Darkness with me - because he's not "really" a Trekkie, even though he's seen every Star Trek series and movie and met much of the casts - but he did agree to see Evil Dead with me instead.


My brother-in-law saw the movie the week before and told us that he didn't like it; that it was just a gorefest. Sure, it was a gorefest but... um... hello? Anyone seen the original? Yeah... that was a gorefest too.

(I should point out here that my brother-in-law doesn't like anything so his opinion doesn't really count.)

Jay didn't hate the movie but he wasn't impressed either. The original was still better, he told me.

Basically, people were going to complain, no matter what they did.

And that's the problem with doing a remake.
Posted by Wondra at 09:00 No comments:

Another good week of memes. (Even with all the stupid animal and baby ones that I hate so much.)

It was difficult to choose, especially with this music related one and this band related one. Oh, and we can't forget this Ash meme, which was also epic. But the winner this week, for making my jaw nearly hit the floor, was this: 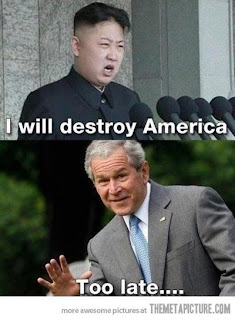 This meme is from themetapicture.com and is both funny and a little scary. Surprisingly, none of my relatives have blocked me since I shared it on Facebook.

Guess I have to try harder...

A Song for Sunday: Mumford & Sons - I Will Wait

I caught this song on an advert earlier in the week and haven't been able to get it out of my head since:


The music video isn't much, and the lyrics aren't especially deep or powerful, but the song is catchy as hell. I love the country/bluegrass feel and can't help but dance along when it's on.

The thing that I love about Mumford & Sons is their twangy, folky sound. It's like... country for people who are too cool to be caught listening to country. If I didn't know better, I would have sworn that they were from the American south.
Posted by Wondra at 13:37 No comments: