Thanks to Jay for this one: 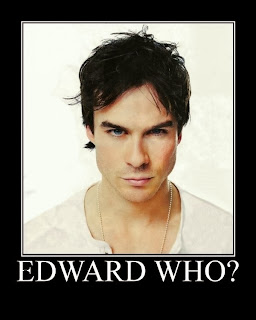 I got two seasons of The Vampire Diaries for Christmas from Jay and have been having myself a little marathon. Or, really, a Damonthon. *drool*

(Now THERE's an appropriate use of the phrase, "Hot damn!")
Posted by Wondra at 11:46 No comments:

A Song for Sunday: Taylor Swift - I Knew You Were Trouble

I apologise in advance to anyone who thought I had taste. Or dignity. This week's Song for Sunday should prove that I have neither:


I'm not a Taylor Swift fan (honest I'm not!) but I heard this song on one of those countdown shows that air this time of year and I haven't been able to get it out of my head since then. I need help.
Posted by Wondra at 13:15 No comments:

And this week's winner is... 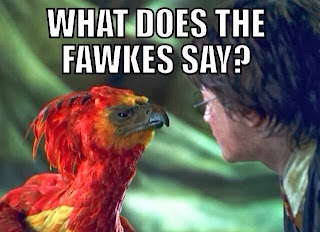 I know everyone is so, like, totally over this song but I don't care. I still love it. :)

(If you don't have any idea what I'm talking about, check out the music video for "The Fox" by Ylvis - but I warn you: you can't unwatch it!)

For sheer Star Trekky goodness, this meme came a close second.
Posted by Wondra at 21:00 No comments:

I love the crazy, frentic energy of this music video. It also works as a metaphor for Depression. (Shut up, it does.) Check out Laura Marling's "Master Hunter":


Best line in the song: I have some news/Wrestling the rope from darkness is no fucking life that I would choose. (Lyrics from AZLyrics.com.) Exactly right.

You know I love me some angst and this song is all about it. Someone's been hurt and they're determined no one will ever do it again, even if it means being the one doing the hurting. I can totally relate.
Posted by Wondra at 16:31 No comments:

Email ThisBlogThis!Share to TwitterShare to FacebookShare to Pinterest
Labels: A Song for Sunday, Laura Marling, lyrics, music, music video, songs, the darkness within, You Tube

The problem with my Depression is that it's self-perpetuating. Depression makes me withdraw from all the people around me - with only makes the Depression worse because I need the constant "noise" of other people in my life to drown out my own horrible thoughts. Time alone with myself? Worse Depression.

Not really the point I had intended to make but true all the same. What was the point I was trying to make? This: I've spent the last couple of weeks doggedly avoiding all the people who could have helped pull me out of a bout of Depression because I was Depressed. Why does that matter now? Well, because when I'm avoiding the world, that includes Facebook (though strangely not Twitter...) and no Facebook means no new memeage.

(Can we get an audience participation "Awww!" from the crowd? Thanks.)

There was one meme that struck me as particularly relevent during that time, though, and I'll share it with you now: 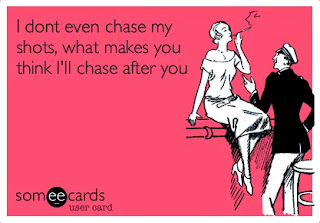 People chase their shots?! What?!

(As much as I love this meme, I do wish memes were only invented by people with good to excellent grammatical skills.)
Posted by Wondra at 11:34 No comments:

A Song for Sunday: The Band Perry - Done

If you've been keeping up, you'll know why this song is this week's Song for Sunday. (lyrics at metrolyrics)


Yeah, yeah... I know it's country but what can I say? Until You Tube is smart enough to warn me against it...

My favourite moment in the music video is when Kim Perry releases this grunt of annoyance and frustration that perfectly sums up how I've been feeling the past few weeks. Wait for it.
Posted by Wondra at 15:37 No comments: