I heard a comedian use ''snot'' as a verb once and I didn't realize what he meant until I saw this meme:

Email ThisBlogThis!Share to TwitterShare to FacebookShare to Pinterest
Labels: allergies, humour, Meme of the Week, memes

I know, I know... admitting that I like Iggy will ruin every ounce of street cred I ever managed to scrape together but, hey ho.

And if we (ooo), you gon' want to pay back tithes
Cause when you finish you gon' feel like you was baptized

Everything about this song makes me smile.
Posted by Wondra at 13:01 No comments:

Email ThisBlogThis!Share to TwitterShare to FacebookShare to Pinterest
Labels: A Song for Sunday, Iggy Azalea, music, music video, You Tube

If you've ever had the pleasure of Skype drinking with me (Yes, that's a thing.), you'll know the frustration I've endured over my broken kitchen trolley. I swear that thing's been busted for six months or more, making getting ice out of my freezer -- which it sits in front of -- a pain in the ass.

And no one likes warm rum and Coke, right?

It took forever to save up enough money to replace the bastard thing but it finally happened! Huzzah!

Then there was just one problem: putting it together.

As you know, Jay is not a DIY-guy. If it involves a screwdriver, he has to call in backup. Well, not this woman! I say bring it on! 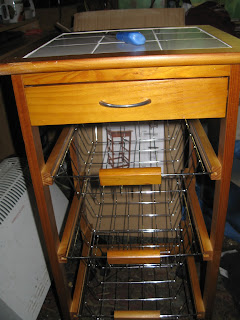 It's a teensy bit smaller than the old one but we can make it work.

I'm also adding a decent set of screwdrivers to my list for Santa this year. Do you know we own just two, a Phillips and a flat-head? Who has two screwdrivers?!
Posted by Wondra at 12:53 No comments: