Okay. I'm going to take a minute to think of something nice to say about this one. You wanna go get a cuppa or something?

Aww, hell. I've got nothing.

When I saw that Rebecca De Mornay and Mischa Barton were in Apartment 1303 3D, I thought, 'Hey. Decent actors. This should be good.' I was so wrong. Rebecca De Mornay is way too good an actor to play such a lousy alcoholic. But, maybe that wasn't her fault?

The characters in this movie weren't likeable in the least. They weren't even consistent. But, hey, if the plot's not, why should the actors be?

I'm getting ahead of myself. Apartment 1303 3D has a pretty basic plot: two young women hate their ageing, rock star, alcoholic mother and one of them decides to rush out into the first apartment she sees, just to get away. Unlucky for her, the apartment is haunted and she ends up killed by one of the apartment's (supposedly) many ghosts. 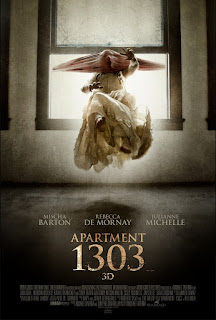 That was one of my problems. You see the ghost of the girl that dies and one other ghost - even though at least five are supposed to be haunting it. Where did the others go? Do ghosts go on vacation?

Then, there's the unnecessarily sleazy super and the annoying child next door who are, surprise!, also ghosts. But... why? Why aren't they included in the police reports? Why are they the only two other people you see in the whole apartment building?

Why does the cop keep changing his mind about whether the girl's death is an accident or a suicide - in the same freaking conversation? Why does the sister decide to stay in the apartment where her sister died? Why does the girl's boyfriend keep spending the night with her sister (even though he's married)?

I have a lot of unanswered questions about Apartment 1303 3D - most importantly: why did I waste my time watching it?
Posted by Wondra at 15:00