Ghost Note is set against the legend of a blues musician who records an album so evil that anyone who hears it dies shortly thereafter. The musician, Eugene, is unable to die but, instead, is captured and imprisoned by a preacher, Milton, who holes Eugene up in his shed.

Fast forward a couple of decades and it's Thanksgiving at the Summers house, where everyone is arguing over what a horrible father old Milton was. Mallory is a teen witch (We're coming back to that later.) who's pissed off for no discernable reason - until her parents drop the bombshell that they're taking off on a romantic holiday for a week and leaving her at Grandma's house until they get back.

It doesn't take Mallory long to renew the friendship she once had with local boy, Rodney - though how often, exactly, she stayed with her grandmother as a child is unclear, especially since everyone else runs off the first chance they get. You don't get the feeling it's a place any of them spent much time at, which makes Mallory and Rodney's relationship unconvincing.

Anyway, Mallory accidentally wakes the demon snoozing in the shed and he's released to wreak havoc. While she's at it, Mallory also uncovers Eugene's legendary cursed record, which certainly doesn't help the situation at all.

Right. Now that we know what's going on, let's talk about Ghost Note.


Ghost Note is one of those movies that should be absolute rubbish. It's got a low budget, the videography isn't great, and the acting is downright terrible. (With the exception of Eugene's Kenny Gardner and Grandma's Allyn Carrell.) So, why doesn't the movie suck? Because, despite its flaws, it's a damned good story.

The legend of Eugene, his evil guitar, and cursed record feels familiar. It's almost as though it's an urban legend you half-remember, rather than the plot of some B-movie. And Eugene is one creepy motherfucker. I had terrible nightmares about that bastard the night we watched Ghost Note. *shudder* 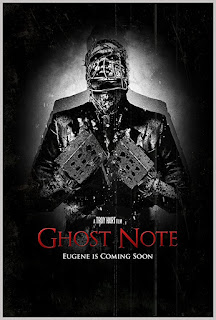 For a low budget film, the special effects in Ghost Note are actually decent and they pull off some pretty good scares. Yup, I jumped like the little coward that I am. 😉 Overall, I enjoyed it. But, there are a few things I just couldn't get over.

One, the transitions are horrendous. I don't know what possessed them to do hard breaks but it doesn't work; it just makes the movie feel really awkward and disjointed.

Two, the moment Rodney pulls out a guitar and starts to sing about how much he loves Mallory is beyond cringe worthy. There's no need for that shit.

Three, if you know that a record can't be destroyed and you know that anyone who hears it is going to either die or kill a bunch of people, then die, you don't freaking throw it into a shallow river. Oh. My. Freaking. God. You wanna set up the twist, I get it. But you can not make it that obvious. It's insulting.

And, four. This is the big one for me - the one that almost got the movie turned off less than five minutes in. (Yeah, I'm gonna climb on this soap box.) Mallory's so-called Wiccan angst is total bullshit. Trust me, I was a teen witch. Portrayals like this are exactly the reason I got so much hassle growing up. Wicca is a religion, not a gimmick you can whip out to explain shit in movies. Not. Cool.

So... have you watched Ghost Note? I'd love to know what you thought of it. Drop me a comment below.
Posted by Wondra at 12:00