So, let's talk about Heartless.


Heartless (2009) is a movie that doesn't know what it wants to be. One moment, you're watching a horror movie - the next, you're in the middle of a romcom. Beyond frustrating. Even more so when it bounces back to horror, then romcom again.

(I'm not an idiot; I understand why the bounce - I just don't like it. I think you could've gotten the same effect without the sappy montages.)

How about a plot? As they go, Heartless has a pretty good one. 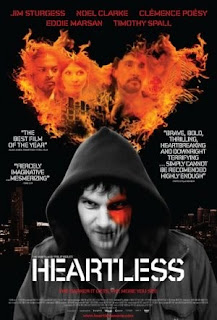 Jamie Morgan is a socially awkward young man who has been singled out his whole life because of a large, heart-shaped birthmark on his face. All Jamie wants is someone to love (hence the rom com crap) but is convinced no one ever will.

Cue a city-wide demon infestation and Papa B, who promises to give Jamie everything he ever wanted if he does a little favour for Papa B. Too bad Papa B isn't great at keeping his word. He asks for more and more until Jamie is forced to chose between the woman he's come to love and Papa B's "gift", which (Jamie thinks) is the only reason Tia loves him.

Turns out, Papa B and Jamie aren't the only ones around who have trouble keeping their promises. Heartless twists again, just when you think you've got it all figured out. I really like the premise, just not necessarily the execution.

Heartless had a lot of potential that, unfortunately, it just didn't live up to. It could have gone to some really dark, disturbing places as a straight up horror movie. But, it didn't, which is too bad. I was hoping for a lot more than I got with this one.
Posted by Wondra at 12:00