Ever stopped to wonder what Death Wish would have been like if the baddies had been geriatric werewolves? Wonder no more!


I admit the premise for Late Phases is a bit strange. (Seriously, that wasn't even a joke. It's Death Wish, with geriatric werewolves.) Even stranger when you realize the Charles Bronson character (Nick Damici's Ambrose) is blind and the victim isn't his wife, but his dog.

It sounds so stupid on paper but, you know what? It works. 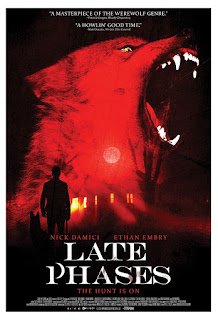 Everyone in Ambrose's new retirement community is a little odd (to say the least), even the police who constantly show up to harass the poor old, blind man for every imagined crime in the neighborhood. It's fairly obvious, fairly quickly who the goodies and baddies are. In fact, everything is pretty obvious, all the time.

That's another reason Late Phases shouldn't work. Everything's out there in the open, right from the beginning, so there's no big reveal and no real twist. You know where it's going but it's so much fun getting there, you get to sit back and enjoy the ride.

Oh, did I mention the monster suits? So corny - and, yet, somehow not cringe worthy. They're kind of... cute. Really.

Have you seen Late Phases? I'd love to know what you thought. Drop me a comment below.
Posted by Wondra at 19:44