Lost Creek is a film about three children who have to face their worst fears to save their town. That's about the only bit I understood. The explanation wasn't really clear enough, which I found frustrating. You eventually learn what the big bad is but not how it came to be, which makes Lost Creek feel all holey.

I'd like to say that the weak plot of Lost Creek was rescued by superior acting. I'd like to, but...

It was not. Man, that's some bad acting. From the whole freaking cast. Yeouch. The worst part is that the dialogue was actually outstanding. With better actors, the dialogue alone might have saved the film. Alas... 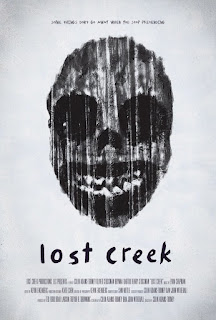 The one exception was Henry Stockman, who played Lost Creek's smart-mouthed sidekick, Bill. That kid was a freaking legend. He stole every moment of screen time he had. (He should've been in a lot more of the movie.)

As poor as Lost Creek was, it managed a few good scares and did a pretty good job of working up atmosphere. Some of the camera angles were particularly effective too - but that's all I can say about this one.
Posted by Wondra at 18:44