Jay and I are still on the hunt for horror movies we haven't seen. The search took us back to 2012 and The Tall Man.

The Tall Man is on the thriller side of horror, more suspense and less scare. That's not a bad thing, just not what the title led me to believe. I went into it expecting some weird creepypasta shit. So not what I got - but not disappointing either.


Cold Rock is a dying town. The mines have shut and the future looks bleak. Even bleaker when the towns children start to disappear. The story follows, it would seem, one mother's attempt to rescue her son from what the locals have dubbed The Tall Man.

Except nothing is what it seems.

The Tall Man doesn't exactly twist; more like it stops dead, does a 180, and strides off purposefully in the opposite direction. Twice. By the end of the movie I didn't even trust myself anymore. 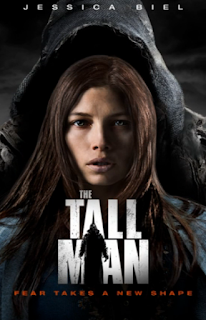 I was 100% behind the "baddies" in this. Seriously. I didn't like the tearful monologue from one of The Tall Man's "victims" at the end, though, because it felt preachy. It was like it was trying to undo all the work the rest of the movie had done in getting us to support the cause. I can make up my own mind about right and wrong, thanks.

Have you seen The Tall Man? Drop me a comment and let me know what you thought.
Posted by Wondra at 12:00