Today, on 31 Days of Classic Horror, we're going to look at Child's Play which, at its simplest, is a movie about a mother who is so desperate to get her son the must-have toy that she's willing to buy one with dubious origins. Jay looks like he's got something to say about that, so I'm going to pass this over to him. 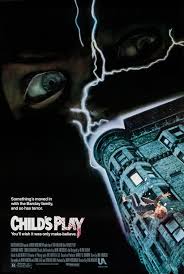 'Child's Play' tapped into that thing where parents will do anything to get the present their child wants for Christmas. This plays on that pressure, that fear of missing out. Think about Arnie in 'Jingle All the Way'. Same thing. You see it on the news every year, people getting trampled over some stupid toy their kid just has to have. That's the part of the movie that's terrifying for adults, I think.

I saw 'Child's Play' (as a young goth) in the cinema. Actually, I took a date to see it. Boy, I never laughed so hard. She'd never screamed so loud.

You're kind of sick, you know that?

This, from the same man who won't let me sit next to him when we see a horror film in the cinema.

Screaming is okay. Jumping like a little bitch and making me jump, not okay.

One of my favourite moments in Child's Play is the moment Catherine Hicks's Karen Barclay sees Chucky come to life the first time. It's really clever, the way it's filmed, because they keep Chucky in the shot as Karen moves around the kitchen. Then, the batteries fall out of the box and you can see all kinds of aw, hell no in her face. She goes over to the doll, trying to convince herself that what's happening isn't happening. She opens the back and sees that there aren't any betters then, "Hi! I'm Chucky!" and he's gone. What a great scare moment. 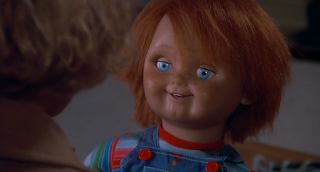 The special effects really were excellent. You completely believed that little shit was alive! Imagine watching 'Child's Play' for the first time, you wouldn't sleep for a week, wondering if your Action Man would come to life. Who wouldn't be frightened of their doll coming to life?  You play with these dolls, making up lives for them, making them do stupid shit then, suddenly, they have a consciousness and they can get their own back on you. No one wants that.

Right? That fear keeps coming back in the film industry, always with a tremendous amount of success. There was Dolly Dearest in the Nineties and, more recently, the Annabelle movies. I think it's a universal fear. That's why the films work so well and that's why dolls that come to life are still scaring the pants off us. 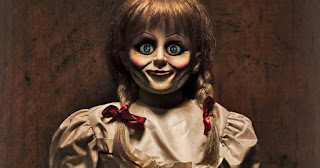 You hit on an interesting point there. The 'Child's Play' franchise is still every bit as relevant today as it was then. Thirty years on, it's still part of modern culture. Go to any comic convention and you will see a number of Chucky dolls and probably someone dressed in Chucky cosplay. Here we are in 2017, awaiting 'The Cult of Chucky'.


If someone says to you, "Hi, I'm Chucky and I'm your friend 'til the end!", you know exactly which movie it's from. Chucky earned his place as a horror icon.

It's not a bad cast, either. But then, you were never going to go wrong with Chris Sarandon, were you? I'm sure this isn't the only time we see him during our countdown (or was it up?) to Halloween.

I'm sure it isn't. You're forgetting Brad Dourif as Charles Lee Ray/Chucky, though, and that's a big mistake. Brad Dourif had been around for a long time, always playing creepy roles, but he's probably found the most success in his career as the voice for this bloody doll. Bet he loves that! 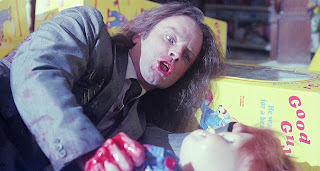 I dunno... I wouldn't mind knowing I helped give children nightmares!

That explains a couple of things.

Like why you're a horror writer and why we don't have children?

Anyway, Child's Play is here because it's the start and it introduced us to Chucky and, yes, it's also probably the best of all the Chucky movies. You know what, though? They're all good. Every movie in this series has made me either jump, or laugh, or both. Usually both. 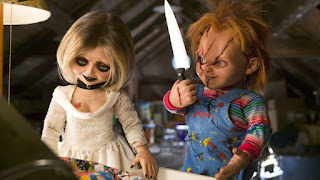 That's all from us today. What are your thoughts on Child's Play? Drop a comment below to let us know!
Posted by Wondra at 10:00