I'm Wondra, this is Wondra's World, and it's October so this must be 31 Days of Classic Horror. We've reached Day 25, which is reserved for George A. Romero's Day of the Dead (1985).

I'll be honest... I'm not a massive fan of Day of the Dead - for all the reasons that Jay loves it. I'll let him get into it. 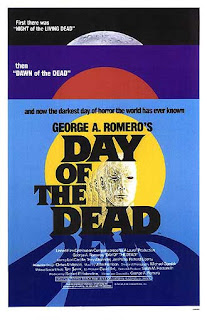 I took my then-girlfriend to watch 'Day of the Dead' at about seventeen, when I was a young goth. It was one of those films you take your girlfriend to in the hopes that it will scare the shit out of her. And it did.

Romero always said that it was the real ghouls who like 'Day of the Dead' but it was his favourite, the closest to his vision. It's all down to the claustrophobia that the film gave you. It was uncomfortable. The actors all became ill from filming underground for so long, which comes across in the film. You had this feeling of impending doom. There was no way out. Last few survivors underground in these caves with no hope.

Which sums up why Day of the Dead isn't my favourite Romero film. It really gives me the creeps, in a bad way. This one really makes me uncomfortable. 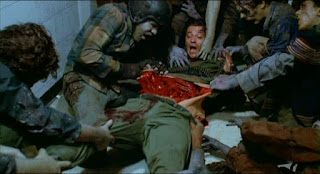 It was Savini's finest moment. He took the gore to a new limit in 'Day of the Dead'. The effects with the human victims, especially at the end when Rose is torn apart. It's gruesome, with bits being taken out of people and stuff. Really graphic.

And, of course, the zombies were much more horrific. The makeup had advanced so much from 'Dawn of the Dead' to 'Day of the Dead' that you actually believed these corpses were decaying, not just bluish grey people. These were walking cadavers.

The zombies aren't really the focus of Day of the Dead, though, are they?

It's true that the zombies were almost a side-part of the film. It was all about the destructiveness of the human condition. We're fucked but we're all fighting over stupid shit. The scientists were looking for a way to survive while the soldiers were bored and didn't understand the necessity. Rhodes doesn't give a flying fuck. He doesn't care about the solution the scientists are looking for, he just cares about his men.

Well, David Liberty's Logan (Or, Dr. Frankenstein.) is pretty out there. I don't know how long I would have put up with his weird experiments, either.

You mean Bub. The evolution of the zombies. This creature that's starting to think and mimic. There's still something of us in there, like when he salutes the soldier. He remembers. 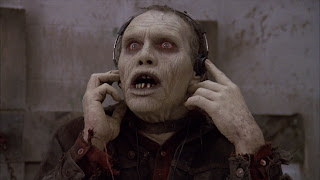 That's where the Dead films lost me. The whole zombies remembering stuff crap. Their brains are rotting. They can only lose function, not gain it. Land of the Dead is even worse for it. It doesn't work for me.

Well, 'Land of the Dead' wasn't the best of Romero's films but not because of Big Daddy. 'Day of the Dead', on the other hand, was a class film. It's really the superior film of the 'Dead' series. This thing is nasty. It shows the very worst of humanity.

'Day of the Dead' is almost a perfect horror film. It has all the elements, the sadness, the impending doom, the escape. But remember, they find an island. They live. It's not the end, there's more. Really, it's about hope.

And that seems like a good place to call it quits today. Thanks for stopping by. Don't forget to see what we have for you tomorrow!
Posted by Wondra at 10:00