Dracula: Prince of Darkness is the sequel to Hammer Horror's Dracula, which took place ten years before the opening of this film. The locals are still terrified of vampires, which makes them seem even stranger to the pair of couples that are travelling through the area. The English tourists are warned not to go near the creepy castle so, naturally, they do and Dracula is woken once more.

This list just wouldn't seem right without a Christopher Lee Dracula movie on it and this is, I think, generally considered to be the best of the lot. Let's ask Jay. 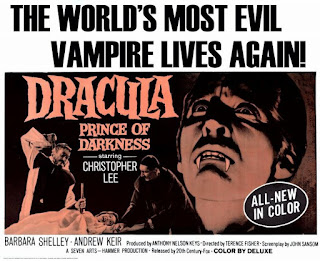 Of the seven Dracula movies Christopher Lee did, this is undoubtedly the best - even though Christopher Lee doesn't utter a single word. He is, however, much more menacing. That evil glare is terrifying. I would've hated to be anyone who crossed Lee in real life because of his ability to wither with a single look. 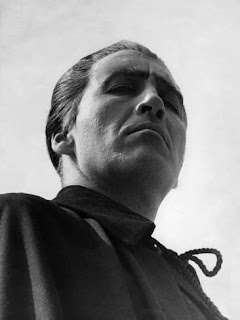 Did you know that script was written with dialogue for Dracula? It was so bad, though, that Christopher Lee refused to speak the words. I think it worked better for the movie that he didn't. The fact that he doesn't speak makes the vampire even more sinister.

I imagine that you'd either have to be a very good actor or have a very powerful personality to pull that kind of move on a set.

I think it's safe to say that Lee was both.

I think you're probably right. Even when Christopher Lee was playing a goodie (on those rare occasions), he was still kind of terrifying. I guess some people just have that look. But, anyway...

Jay and I did not agree when we discussed where on this list Dracula: Prince of Darkness belongs. I think, although it's set back in time, it still feels very 60's to me, with the way the actors move and talk.

Like I said before, you're wrong. This is one of those Hammer films that's timeless. They did a brilliant job of making it feel like another time and not the Sixties at all. It's not frightening, maybe, but that doesn't detract from the story. It's fast-paced and exciting, with a great climax.

No, it's not frightening, but it is atmospheric. The control of light and shadow really helps there. It actually feels like you're in a creepy old castle when you watch Dracula: Prince of Darkness. And Philip Latham as Dracula's faithful servant, Klove, is all kinds of aw, hell no. You wouldn't catch me accepting any kind of invitation from that creepy mother...

Dracula: Prince of Darkness earned its spot on this list but it isn't my favourite Hammer Dracula movie. My favourite is still The Satanic Rites of Dracula, released in 1974. 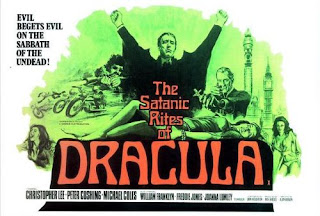 That wouldn't have anything to do with Joanna Lumley, would it?

It actually has to do with how clever the story is. Bringing Peter Cushing back as his own grandson, Lorrimer Van Helsing, was inspired and, yes, Joanna Lumley was the perfect choice for his granddaughter. I always thought they could have done more with that concept...

Okay. So Dracula: Prince of Darkness isn't your favourite Dracula film. Why is it on this list, instead of Satanic Rites?

Because, although I preferred Satanic Rites, Dracula: Prince of Darkness is the better movie and, really, the better example of Hammer's horror.

I'll agree with that. I think I prefer Dracula: Prince of Darkness myself, because it feels more like what I think a Dracula film should feel like. Speaking of favourites, by the way, I think we both agreed on who our favourite character in the movie is - surprisingly, not Dracula. Do you want to explain?

The best character has to be Father Sandor, the straight-talking cleric. At the beginning of the movie, he's the only one trying to talk sense into the locals, who want to stake everything that doesn't move, just in case it turns out to be a vampire. (He's wrong, of course, but that's beside the point.) The bit where he walks in and starts warming his backside by the fire is gold. He's definitely the comic relief a heavy movie like Dracula: Prince of Darkness needs.

Agreed. What do you think, dear readers? Do you agree with our assessment of the film? Do you prefer one of the other Hammer Dracula films? Let us know!
Posted by Wondra at 10:00