Here we are, Day 28 of 31 Days of Horror and The Exorcist (1973). The Exorcist is about a mother, Ellen Burstyn's Chris MacNeil, whose daughter (Linda Blair's Regan) becomes possessed by a demon. Two priests are called in to assist and the demon is exorcised, at a high cost.

The Exorcist isn't one of my favourite horror movies so I'm going to sit back and let Jay gab at you awhile. I'll be back... 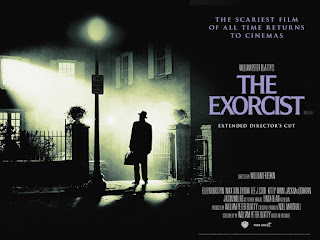 I saw 'The Exorcist' the first time on video and I didn't really pay much attention to it. About three years later, I caught it as part of an all-night picture show at the cinema. It was a lot different seeing it in the cinema. It's always better in the cinema because all you have to focus on is that screen in front of you. The second time I watched 'The Exorcist', I found it frightening. It's a very nervy, atmospheric film. 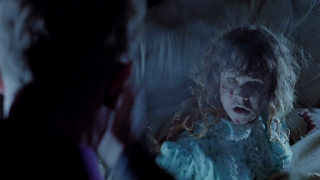 When my dad went and saw it in '73, there were nuns and priests outside the cinema to talk to if the movie frightened you. In its day, it was a very frightening film. Britain was a much more religious country after the war. It didn't affect me at all on a religious level. I was always pretty un-religious, anyway.

Funny, although I don't really dig this movie, it's exactly the kind of movie I love. If I have a choice between watching a movie about possession or a slasher flick, I'll choose possession any day. So why doesn't The Exorcist work for me? Well... It's so freaking slow, to start with. The whole bit at the beginning, at the dig? Felt so unnecessary to me. I'm normally the person screaming for backstory in a movie but backstory can not come at the expense of entertainment. It feels like the whole first half of the movie is nothing but backstory and that just doesn't cut it. Make your point and get on with it. 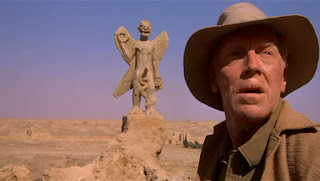 The other thing I don't like about The Exorcist (and, yes, I do know that it was intentional) is the complete lack of sound. The Exorcist is eerily quiet for nearly the whole film, with only the odd "Tubular Bells" to break it up. I find it unsettling - which, of course, is the point. In addition to making the film feel unsettling, though, it also makes the film feel longer, which isn't good.

You're absolutely right; the film was meant to feel unnaturally silent. Everything was done deliberately to unnerve you. For instance, it was filmed in a freezer unit. The fact that you could see their breaths the whole time added atmosphere. 'The Exorcist' is one of the few horror films that really deserves its reputation. Now, you can watch episodes of 'Buffy the Vampire Slayer' that are more frightening but, back in the day, 'The Exorcist' was a really scary film. 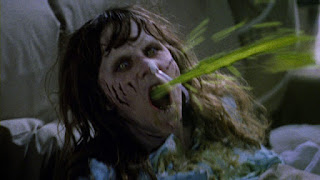 'The Exorcist' is more than just a horror movie; it's an iconic horror movie. Just think of the movie poster, with the priest standing outside the house. You know that image, even if you're not a huge horror fan. And the musical score, "Tubular Bells", will never be forgotten. There are so many scenes in 'The Exorcist' that have been referenced or parodied in other films and TV shows. It's become part of our cultural literacy.

Yes, I remember that I saw the parody, Repossessed, before I ever saw The Exorcist. That's messed up. Even though I'm not a fan, I would never try to negate The Exorcist's relevance or its importance to the future (and history) of the horror genre. One of my favourite movies of all time, Stigmata, could never have happened without The Exorcist. It basically gave birth to a whole sub-genre of horror, satanist horror. Like it or not, this is one film that's never going away.

There were five or six 'Exorcist' films in the end. Some were good and some were bad. Some just made you go, "Huh?" I hated 'The Exorcist 2: The Heretic'. It had no business being there. It was absolute rubbish, even though it had a great cast. That's always the problem with attempting to follow a seminal movie like 'The Exorcist'. You'll never live up to it. The first series of 'The Exorcist' TV show was very good, though, especially because it tied it in with the movie. The second series is shaping up well, too, because it moves away from the family. We'll see how that goes.

We will. For now, though, we've gotta wrap things up and carve some pumpkins.

What do you think of The Exorcist? Let us know in the comments below.