Not only is it day 13 of our 31 Days of Horror special feature but it's also Friday the 13th. Only one movie we could have chosen for today.

Though, technically, there are twelve...

We knew that today would feature Jason Voorhees in some capacity so it was just working out the one we could agree on. It was surprisingly easy. After almost no bickering at all, Jay and I settled on Friday the 13th Part 2 (1981). Let's see what he has to say... 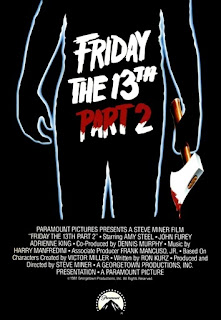 I first saw 'Friday the 13th Part 2' on video when we hired it from the video shop. It was maybe 1982 or 1983. I'd seen the first movie and wasn't really impressed but I'd been told that this was much better, much more frightening, so we gave it a go.

The problem with the first 'Friday the 13th' movie is that the only real jump is at the end, when Jason jumps out of the water. I found the sequel much jumpier. It's one of those movies where they don't go for the obvious scares. Take the scene where Ginny's hiding under the bed. You think he left the room but, no, he's hovering over her.

I really like that about Friday the 13th Part 2. You're waiting for the scares the whole time. They do such a brilliant job of teasing you that you're on edge, anticipating horror the whole film. It's so well done. 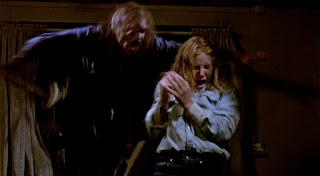 Like the bit when you hear something and it turns out to be the dog. Everyone laughs and starts to relax then BAM, he's coming through the window.

Right. And it mirrors that the bit at the very beginning, with the girl from the first film. The cat comes through the window, scaring the shit out of her. She relaxes and, what's this? Severed head in the fridge! The fact that the ending so perfectly mirrors the ending shows what a brilliant job they do of foreshadowing. 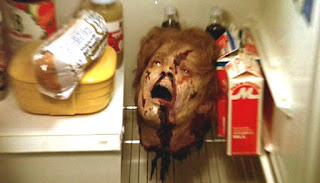 'Part 2' was pre-the mask. In this one, Jason wore a sack on his head, with a single eye hole. The image everyone knows became iconic when he got the mask but that didn't happen until 'Friday the 13th Part 3'. In 'Part 2', Jason was basically a hillbilly in a sack. The hockey mask, when it came, made him more sinister.

The mask is something important to mention because we didn't have those masks here in the UK at the time. We had some hockey teams, but they never wore anything like that. Giving Jason that mask made him even more... foreign for people like me, watching outside of America and, you know, anything foreign scares people. It makes him even more unusual, more unsettling.

The thing that I love about Jason in Friday the 13th Part 2 is that they don't show him. For so much of the movie, all you see are his ankles and legs. Again, it's a way of teasing you. When are we going to see him? Why aren't they showing him? When you do finally get your first glimpse of Jason, you're kind of expecting him to look the way he did at the end of the first one. That sack on his head is a real shock. It's off-putting.

I want to take a moment to talk about the soundtrack to Friday the 13th Part 2 because that's also off-putting. The music is shrill, stabbing, and discordant. It sets your teeth on edge - which is, of course, exactly what it's supposed to do.

'Friday the 13th Part 2' is a nasty, jumpy, creepy movie for someone in their early teens. It seems tame compared to what's out there today but it's still a great film. The sequels... well... 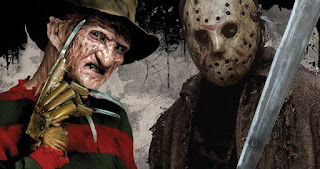 The sequels just went too far. The fifth one, 'A New Beginning', barely features Jason at all. 'Friday the 13th: Jason Lives', when they dig up the coffin and the lightning strikes to bring him back was just silly. 'Jason takes Manhattan', though, was a cracking romp. I love that one. 'Jason X', that was an excellent film. What a clever idea. So ingenious. I thoroughly enjoyed 'Jason vs Freddy' because it didn't try to take itself seriously. Clever idea.

Jason X is my favourite of the 'Friday the 13th' films. It's laugh out loud stuff. I especially love when Jason falls out of the cryo-chamber and accidentally cuts off the stoner's arm. Also, the robot having nipple-envy and her fake nipple falling off. It's dumb, but it's hilarious. 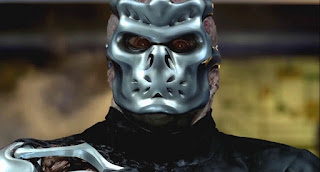 'The Friday the 13th' reboot essentially condensed the first three films into one. It was okay, but I preferred the originals. I assume they did the reboot that way because they wanted to get the mask in as quickly as possible. Like the reboot of 'Halloween', it was just okay. 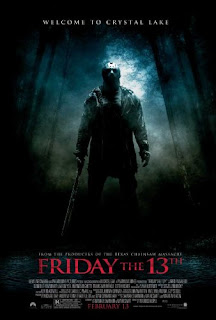 We have very different opinions about the reboot of 'Halloween'. Mine includes the words "steaming", "pile" and "shit." Rob Zombie couldn't make a horror movie to save his life.

Yeah, yeah. I'll save that rant for when we get to Halloween. I agree with you about the reboot of Friday the 13th, though. It was okay, I guess. Just kind of hard to get into because it moved so fast. It gets points for having Jared Padalecki in it, though.

Friday the 13th is one of those film franchises that we could spend the whole day talking about. Unfortunately, since it's actually Friday the 13th, we should probably spend that time watching a few of the films.

Come back tomorrow, horror fans, to see what we've got for you.
Posted by Wondra at 10:00