Welcome to Wondra's World and Day 23 of our 31 Days of Classic Horror countdown. Today's movie is Fright Night (1985). I know Jay's excited about this one so I'm going to let him start.

I first saw 'Fright Night' in the pictures with my best friend. It was awesome, such a great film! It's a good comedy horror, way ahead of its time with some of the effects used, mainly the bat. That bat effect was so realistic. It was like, whoa. 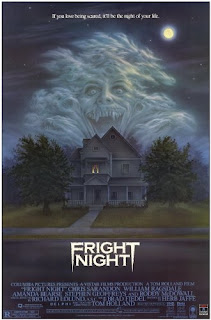 From start to finish, 'Fright Night' was just a good romp. The way Brewster's always screwing up with his girlfriend and then... Evil.

Stephen Geoffreys's Evil Ed is a fun character. His bit at the end - you know, "Oh, Brewster... You're so cool!" - is unforgettable but I especially love the bit where he's harassing Roddy McDowall's Peter Vincent after he's been turned. He gets more and more hideous each time you see him during that bit so you just don't know which Ed you're going to see.

I don't think it's unfair to say that Evil steals 'Fright Night'. The end, where Brewster sees him in the house across is brilliant. Geoffreys was meant to be in the sequel - him and Amanda Bearse - and it's a shame that they weren't included. The director had changed and he treated them booth poorly. 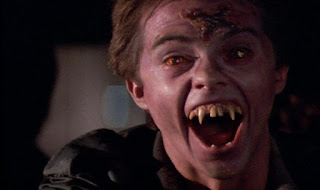 I agree! The documentary on Fright Night was really good. I think it was called You're So Cool, Brewster! The Story of Fright Night. Well worth a look. 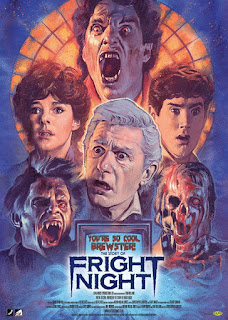 It was a good documentary.

Evil and Amy were both good but you can't forget about Chris Sarandon. What a great vampire Chris Sarandon made! The lynch pin, of course, is Peter Vincent, vampire hunter. The name Peter Vincent (pretty obviously to anyone who loves horror) comes from Peter Cushing and Vincent Price, the director's heroes. Actually, Vincent Price was supposed to be the vampire hunter in 'Fright Night' but he was in poor health and couldn't do it. Enter Roddy McDowall. 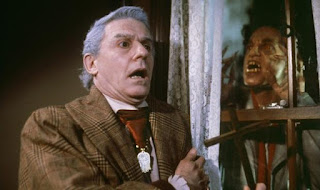 Roddy McDowall was always one of my favourite actors. Some people would say that 'Planet of the Apes' was his best role but 'Fright Night was my favourite'.

I'm going to be honest with you. I'm all about Amanda Bearse. (Not that Vampy Chris Sarandon isn't just yummy.) I grew up watching her on Married With Children and I love seeing her as a vampire. 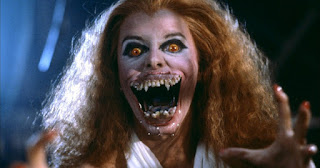 The image of Amanda Bearse's vampire has become quite iconic - but, then, so has 'Fright Night'. It has it all: humour, horror, romance, gore. It's perfect. They could have done another two or three of these movies. There's no language and barely any nudity so its quite tame by today's standard but still incredibly enjoyable. I'll keep watching it until I die.

I suppose we should probably talk about the 2011 remake? You've got to give any movie starring a gothed up David Tennant props, right? 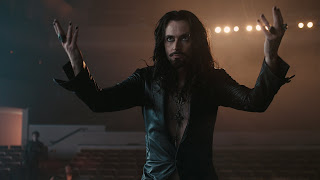 Eh. It would have been okay if you'd called it something else. It really didn't work as a remake of 'Fright Night'. You know, there was no need to remake it. Unless you can do a remake better, don't touch it.

And on that note, I think we'll call it quits for today. Thanks for stopping by! What movie are you expecting to see as we work our way to 31? Let us know in the comments below.
Posted by Wondra at 10:00