There's only one horror franchise that could conclude our 31 Days of Classic Horror and that is, of course, Halloween. Picking the right Halloween movie for this list, however, isn't as easy. After much deliberation, we eventually decided that Halloween II (1981) is the best of the franchise and our very last film for the countdown.

Halloween II carries on directly from Halloween and takes place mostly in the hospital Laurie Strode is taken to following Mike Myers's attack. Turns out a hospital makes a pretty good location for a horror movie... 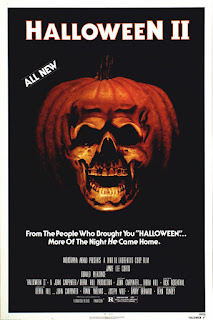 Time to pass things over to Jay to get his opinion.

What a film. People will argue about this one. Some will say you can never beat 'Halloween' but I preferred the sequel. Michael Myers was much more menacing in 'Halloween II'. The soundtrack was better and Mike Meyers's shape was more menacing. There's nothing you can say about Halloween 2 that was bad. It was a superb film. It didn't have the shock value of the first film but sequels never do.

'Halloween II' was a nerve-wracking film. The 'Halloween' films all were. They were good at building up tension. The 'Halloween's have been constantly well done. I loved 'Halloween H20'. Jamie Lee was back in that one but Donald Pleasence had died. She's faked her own death but can never get away from Mike Meyers. 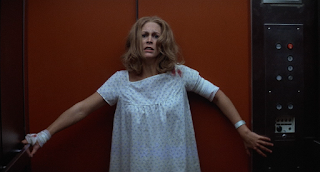 Halloween H20 almost beat Halloween II for me. There's something about going back while moving forward that really appeals to me. Michael is even more sinister in H20 than he was in Halloween II. I love the bit where he's lowering himself down from the ceiling with one hand. That's one slick psycho-killer.

Carpenter hated doing sequels, which is why he didn't direct 'Halloween II'. He did produce it, though. You know, I'm sure we talked about it before but Carpenter was good at "stings", which is when they have a sudden blast of music when someone comes on the screen. It's one of those very iconic soundtracks. The minute it comes on, people recognise it for what it is. It's very atmospheric and gory in parts. Very jumpy. 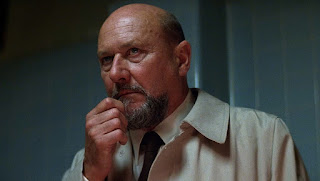 And you can't argue with Jamie Lee Curtis's status at a scream queen. The scream queen, for me. It was nice that Nancy Loomis's Annie got a cameo, even if it was as a corpse.

'Halloween II' is very tight. It still holds up very well. I think this is because it's set in a hospital. It carries right on from that same night, even though it was film two or three years later. My favourite part is when he's dipping her head in the scalding water, because of the effects.

That's my favourite part too! What a terrifying death. Still gives me the creeps. I also love that moment when the nurse goes to call the doctor but he's already been killed and, as she backs away, you see Michael step out of the shadows. Great, visually. 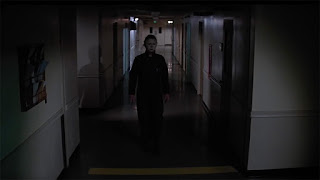 Well, as it's Halloween and we've got some celebrating to do, we'll leave it there. What do you think of our countdown? Do you agree or disagree with our choices? Let us know!
Posted by Wondra at 10:00