Wow. Is it Day 27 of our 31 Days of Classic Horror countdown already? Guess that means it's time to talk about The Lost Boys (1987). I'd like to say that I'm going to discuss The Lost Boys impartially but, truth is, I'm just going to do my best not to completely fangirl out. Here we go... 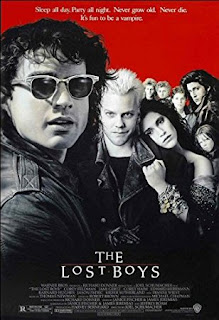 The Lost Boys is about a mother and her two sons who move to Santa Carla after a bad divorce where they meet an interesting assortment of people - most of which are either vampires or vampire hunters. Yup, a totally lame synopsis for the awesomeness that is The Lost Boys.

I'm going pass things over to Jay for a moment. Let's see what he thinks.

I saw 'The Lost Boys' the week it came out. I had bleached-blonde hair at the time, being a goth, which made people do a double-take. I'd bleached my hair that week in defiance so it was a happy coincidence (though not for my grandfather.) I won't lie, I liked the attention. 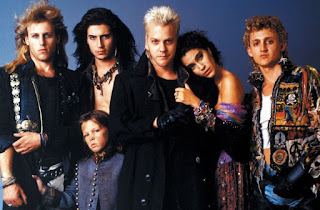 'The Lost Boys' came out very close to 'Fright Night'. 'Near Dark' too. There was a glut of great vampire films in the Eighties, which was a good thing. Horror does that; it goes in cycles. Vampire movies tend to be either cheesy eroticism, straight up comedy, or very dark. That's the secret of the lost boys - it has all three. You have the love interest in Star, you've got the darkness of David's lot, and the Coreys for humour. A bit of sexiness, a bit of a scare, and a bit of humour - a tried and tested formula.

Right. The Lost Boys is just teeming with sexy teen angst but the comedy, mostly provided by Corey Haim's Sam, keeps it from becoming melodramatic in the way that some teen vampire films (we won't name names) do. The family bits are intersected by dark periods full of murder and blood. What more can you expect from a film?

'The Lost Boys' was Corey Haim's best film. He was superb and really made you laugh. I love the line, "Oh, shit. It's the attack of Eddy Munster." A joke like that resonated with people my age, having grown up with that show ['The Munsters']. I'd say that the comedy was provided by the Frog brothers, though. Most useless vampire hunters ever. 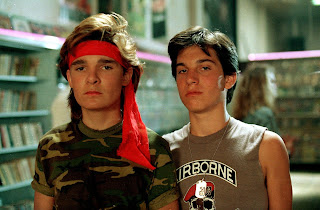 I love the Frog brothers. They're just so ridiculous that all you can do is shake your head and laugh. Their greatest moment is when they enter the cave to kill the vampires. Big mistake but, as Edgar said, "It's not our fault, they pulled a mind scramble on us! They opened their eyes and talked!"

The soundtrack to 'The Lost Boys' was great. It was so Eighties. The whole feel of the movie embodied the Eighties. A superb film, very much of its era. I hope they never try to remake it. You'll never better it. It was unique to its time. 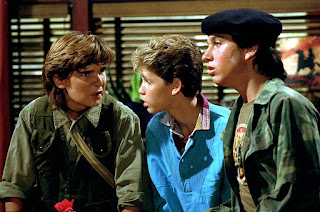 Agreed. Any attempt at remaking The Lost Boys could only be cringe-worthy at best. Even the sequels only managed to be okay. I hate to say it but the thing that made The Lost Boys so magical was that it was just totally Eighties. The hair, the fashion, the music - especially the music. The soundtrack was fantastic. It has to be said, though, that Seasons After covered "Cry Little Sister" for one of the sequels (The Tribe, maybe?) and they did it even better.


Which is interesting because the version of "People are Strange" that was done for 'The Lost Boys' was better than the original.

'The Lost Boys' is one of those films that I keep coming back to, year after year. Of all the vampire films I've seen - of which there are many - 'The Lost Boys' makes the top 5.

Same here. It's just a cool fucking movie. I couldn't say how many times I've seen it but I know I'll probably watch it again before the year's out.

And that's all we've got for today. Come back tomorrow for our next movie.
Posted by Wondra at 10:00