Just two more days left of our 31 Days of Horror special feature! I can't believe it's almost Birthdayoween already! Have you guessed what tomorrow's film will be yet?

Today, we're going to be taking a look at one of Jay's favourite movies, The Omen (1976). There have been countless tales of the anti-christ told on screen but The Omen has to be one of the very best. (I think Jay would argue that it is the best. Let's find out.) 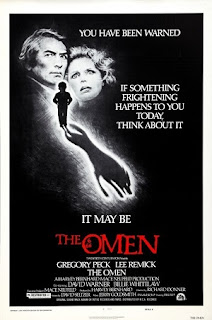 Of course 'The Omen' is the best movie about the anti-christ. Don't be ridiculous.

I saw 'The Omen' in about 1980. I was about eleven and much more aware of things by then. You start to think about things, to worry about things, at that age. By the time I watched 'The Omen' I could really understand it; it wasn't completely over my head. 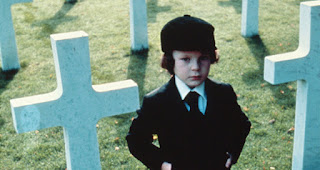 You know, I watched Damien: Omen II before I saw The Omen. I just thought of that. I don't suppose it's important, really, except that my parents must have preferred that one because it was the only one they kept on video.

The great thing about 'The Omen' is the cast. What a cast! It doesn't get much better than Peck and Remick, with Troughton and Whitelaw. Even Harvey Stephens as Damien was superbly cast. The director had seen hundreds of children and each time, they told the kid to go mental. When he told Stephens, the kid kicked him right in the nuts. Helluva way to land a gig.

It's a cast that works very well together. They click, which makes for brilliant performances, all 'round. Harvey Stephens - that's an evil fucking kid, man. And his nanny, Billie Whitelaw, is fierce. My favourite, though, is David Warner. I loved him in My Best Friend is a Vampire. Great casting.

Billie Whitelaw as Mrs Blaylock really was terrifying. Mia Farrow, in the remake, was like Mary Poppins compared to that. And the new Damien only had two modes, confused and scowling. They should have stayed well away from remaking 'The Omen'. They were never going to do it better.

Oh, don't forget about Leo McKern as Bugenhagen. Only a cameo, really, from Bugenhagen but he's the linchpin in the sequel so it was very important. The Devil's always watching. 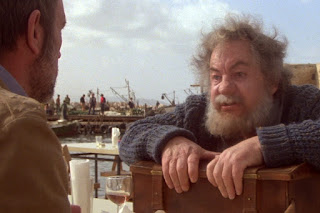 I know we don't agree on our favourite satanic films. The Devil's Advocate is mine but The Omen is your choice, right?

Right. It is the religious film. This isn't just some demon, this is the son of the Devil himself. 'The Devil's Advocate' is really a thriller, while the 'The Omen' is terrifying. It'll always win, because of that. 'The Omen' made you wonder if religion was real. Could there be an anti-Christ walking among us? 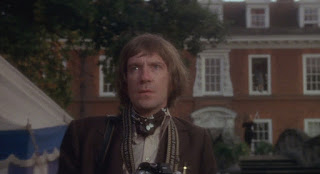 The Omen really does do a good job with foreshadowing. That feeling of dread as you're waiting for the ball to drop is powerful and propels the action forward. The 2006 remake tried to use dream sequences to do the same and it failed miserably.

The bit that really got me, though, was the bit at the party where the nanny hangs herself. The cheerful way she kills herself for Damien is scary. Mindless devotion is a terrifying thing.

God, the remake was fucking awful. The three sequels were good, though. 'Damien: Omen II' was superb. By the time they'd gotten to number 3, the cast wasn't that well known. The fourth was more television actors than movie actors but it still works.

Omen IV: The Awakening doesn't get enough credit. It's actually a cracking film and so clever. 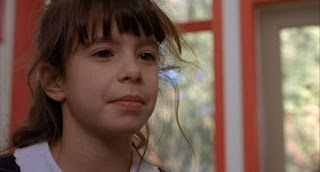 It's explained well, too. The first knife only exterminates physical life and that was the only one of the seven that was used. It left it wide open for more movies.

Omen IV is quite sinister. Again, the foreshadowing is very well done and the deaths are inventive. Asia Vieira is creepy as shit as Delia, who carries her brother's life. Such a clever idea. Yeah, it was only a made-for-TV movie but it's much better than you'd think.

I was enjoying the new TV series so I was annoyed that they canned it. It had a lot of potential. It filled in the gaps that the movies missed out. I would have liked to have where they took the telly series. 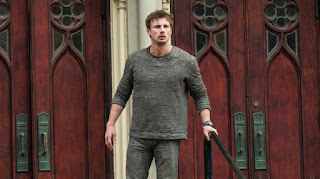 I didn't care much for the TV version. I thought it messed with the canon a little too much and was just too weird. You forgot about the music, though. The Omen has an awesome soundtrack.

The soundtrack was immense. For me, it's the best score I've ever heard. I only need to hear the opening bars of that thing and the hairs on my neck stand up. It's so invokative of the film. It's menacing. Bad shit is about to happen here.

'The Omen' is kind of timeless. They wouldn't dress like normal people because they're ambassadors. You rarely see any cars. What is there to date it? There was no bad language or sex. There's a little gore, but not much. The worst bit is probably when the photographer's beheaded or maybe when he's fighting with Mrs Baylock at the end.

Agreed. It never needed to be remade because it still feels so relevant.

Okedoke, folks. That's it for us today. Come back tomorrow for our very last film!
Posted by Wondra at 10:00