Hard to believe we're already on day 19 of our 31 Days of Classic Horror! Yet, here we are, ready to talk about Pumpkinhead (1988).

Pumpkinhead is about a man whose son is killed by reckless college kids. Lance Henriksen plays Ed Harley, who summons a demon, Pumpkinhead, to avenge his son's death - only to regret the horror that he's wrought upon them.

Let's go over to Jay to see what he thinks of Pumpkinhead.

I bought 'Pumpkinhead' on video at a market back in the early Nineties. I didn't know anything about it but it was an 18 so I decided to give it a go. I was always on the lookout for horror movies that I hadn't seen. Nothing has changed.

Pumpkinhead was one of those creature-features that I wasn't expecting to like. It joins movies like Frankenfish and Monster Man on my list of Movies That Shouldn't Work But Do.

Absolutely. A bit like 'Rawhead Rex'. You don't expect much when you watch it but you come away thinking, 'Wow! What a film!' It's a surprise film.

I knew Lance Henrikson from movies like 'Terminator' and knew he was a good actor so I was pretty confident about his performance, if nothing else. 'Pumpkinhead' was okay when it started but then... the monster. What an awesome creation. I think, if I remember correctly, that it was part puppet and part guy-in-a-suit but it was cool.

Whatever it was, it was very convincing. I never got the Pumpkinhead bit, though... I mean... He doesn't have a pumpkin head, right?

It's because you have to dig him up in the pumpkin patch. And, his head was kind of pumpkinish.

Huh. I guess I always thought it as a graveyard... 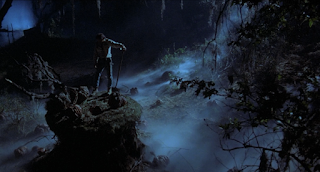 'Pumpkinhead' is a clever creature-feature. As a kid, Ed Harley was hunted by the time he saw the Pumpkinhead. When his own child is killed, he wants that vengeance. Of course, he comes to regret it.

Haggis warns him but does he listen? She warns him of the price that must be paid. Did he think it would be easy? But a man overcome with grief doesn't think about the consequences.

The witch is amazing. The makeup job on her was fantastic. A tremendously well played character. Haggis was never played by the same person again, which let the rest of the sequels down. 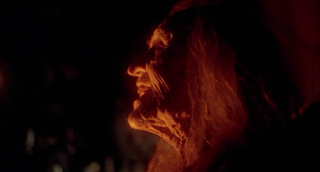 I'll be honest, I didn't really care for the sequels much. They just weren't as good as Pumpkinhead.

The sequels are pale in comparison. They're okay, but not as good. The monster is never as good again.

I think this was Lance's best role. The bit where the kid asks if there's anything they can do to help... the look Lance gives him is pure hatred. And did you notice a very young Mayim Bialik?

I didn't, until you pointed it out! You just totally dismiss her as a scruffy hillbilly.

The fact that they're way out in the middle of nowhere is important. You can feel the isolation. It feels like nothing has changed in Hicktown, America for ages. It's a poor area so these rich kids that come in can do what they want.

Or so they think.

I love the revelation at the end - that Ed Harley becomes the Pumpkinhead. That he stopped it this time but, the next time Pumpkinhead is called, it will be him doling out the vengeance. Great.

Anything else before I wrap this up?

Just a couple of things. First, I can't say often enough how good the Pumpkinhead is. The creature is so sadistic. It delights in your pain - and I love that. Also, It's extremely well lit for a horror movie. You're never struggling to see what's going on, even in the dark woods.

All in all, a great film.

Thanks for stopping by. Don't forget to come back tomorrow. See you then!
Posted by Wondra at 10:00