Welcome to Wondra's World. This is Day 26 of our 31 Days of Classic Horror countdown and today Jay and I will be discussing Tim Burton's Sleepy Hollow (1999). 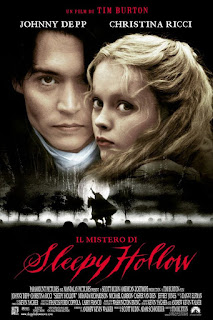 If you're unfamiliar with the story (And, really, how could you be?), Sleepy Hollow follows the adventures of Ichabod Crane's journey to Sleepy Hollow. In Washington Irving's original story, Ichabod is a school teacher. Tim Burton breathes life into the old tale by transforming the school teacher into a police officer. Other changes to the cast and a healthy dose of Burton's unique style make Sleepy Hollow a truly outstanding film. Let's see if Jay agrees.

I read Sleepy Hollow in school, of course. You had to - not that I minded. A headless horseman? I loved it. It was almost custom-made for me. Then, the movie came out in 1999 and I took my mum to see it. I've always loved Tim Burton's visuals so it was exactly what I'd hoped it would be. You know... I always imagined Burton was a goth back in the day. 'Sleepy Hollow' is absolutely a gothic film. It's dark and creepy. You can see so many gothic influences.

It certainly is. Tim Burton has a dark, creepy style that permeates his films, Sleepy Hollow being no exception. Burton films are all misty shadow and wide eyes. Sleepy Hollow just also happens to come with sharp, pointy teeth.

The Hessian was only really in the film a few minutes, maybe, but it was such  a memorable few minutes! He was terrifying, with his filed teeth and those bulging eyes. Even so, he was so cool that I kind of always wanted the horseman to win. My favourite moment in the film is when the Hessian says "Shh," then her sister breaks the twig. Good foreshadowing there. The movie went up a notch whenever the horseman was on the screen. 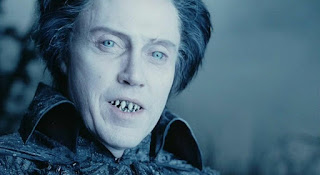 Hear, hear. What a tremendous, if underused baddie. That mouthful of sharp teeth reminds me of a shark, of the ultimate predator. The thing that I like even more than the Hessian, though, is that he's not really the baddie. I love it even more than Lady Van Tassel is played by Miranda Richardson who, of course, was Queenie in Blackadder. That's so perfectly messed up.

The whole cast was brilliantly chosen. You can't go wrong with Johnny Depp, Christina Ricci, etc. It really is a who's who. 'Sleepy Hollow' was just a monster of a film. You can't beat Depp's performance as the gormless Ichabod Crane. The fact that they changed Ichabod to a detective actually helped the movie. It wouldn't have been believable if he'd been just some school teacher taking on a headless horseman. 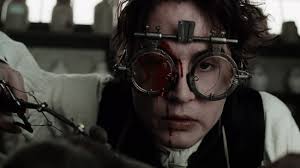 There's so much driving this film. Pain, grief, greed, vengeance - not to mention a juicy baby daddy secret and a handful of witchcraft. It's basically a 19th century soap opera, all wrapped up in the guise of a horror film. For me, the story is so strong, that the horror comes second. Which is something Burton excels at, subtle horror. The creeping kind, rather than the in-your-face gore so many others rely on.

Exactly. Let's not forget that 'Nightmare Before Christmas' could so easily have been on this list instead. It may be for children, but it's still a horror film - a beautifully crafted, musical horror film for kids. Thank you, Tim Burton for giving us that. Whether you like Burton or you don't - and he can be hit or miss - this is one of his best films. 'Sleepy Hollow' gives you little frights and builds up tension well but here's also humour. It's just a great fucking romp; not too scary but action-packed, strange and beautifully visual. Do yourself a favour and watch this film. 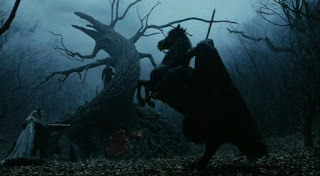 There you have it, Sleepy Hollow in a nutshell. What do you think of it? Let us know - and don't forget to come back tomorrow for more!
Posted by Wondra at 10:00