Okay, before we get around to why The Thing from Another World deserves to make this list, I have to mention that it's one of the hardest ones to watch because of how badly dated it is. It's very 1950's aw-shucks-well-we're-just-good-ole-boys and, of course, in black and white. You really have to have a love of old movies to get into this one. Even though The Thing from Another World can be difficult to watch, though, it's totally worth it because (Gosh darn it!) it's great sci-fi horror. 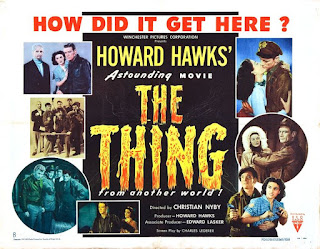 By today's standards, The Thing from Another World is hokey. Obviously. But, you know, I watched The Thing From Another World just a few months ago and I was amazed by how well it still holds up. Yes, it's black and white. Yes, the actors are a bit hammy. But, I can imagine sitting there, watching this movie in the 60s. It would have been such a sinister movie to see. That's what makes it such a classic horror movie.

It was hard to decide whether this movie should be on this list or its later remake, The Thing deserves the spot more. The Thing From Another World was such an important movie that, although Carpenter's The Thing was the superior film, you have to give this B-movie kudos for how well it did. Considering its age, and the fact that it didn't have the special effects behind it, it still managed to be truly terrifying.

He's right. Choosing between The Thing and The Thing from Another World was a lot harder than I expected it to be. You have to consider when they were released, though, and the fact that you wouldn't have had without the other. There was a lot of great sci-fi horror when The Thing came out so you have to say that this just beats it, for originality.

Like I said, The Thing is the superior film but you have to give credit where credit is due. This is the first aliens-from-another-world horror that I remember really scaring me. It was otherworldly. These aliens were much more malevolent than other things around at the time. 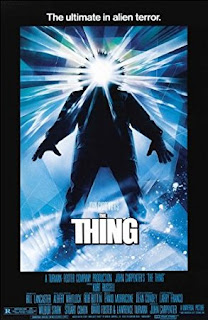 To understand where movies like The Thing came from, you have to watch the original. It's like watching Dracula versus Dracula Prince of Darkness - if you only watch the newer movie, you're only getting half the story. You need to know where it came from to know how it got there, if that makes sense.

Completely. The Thing from Another World is a forerunner and absolutely essential to the development of the sci-fi horror sub-genre. Movies like The Thing and Alien came from this movie. That doesn't mean it's not worth an eye roll or two, mind.

I'm rolling my eyes at you now.

I was a kid when I first saw The Thing From Another World, maybe eight or nine. Because it was the weekend, I was allowed to stay up with my father to watch it. It frightened the shit out of me - so much so that I wouldn't go to bed without the light on. My dad, being the practical joker that he was, stayed outside my bedroom door and made spooky noises. He was good like that.

I'm starting to notice a trend here. Your grandfather, father, and you. We should probably talk about that sometime...

But, for now, I want to talk about the massive cast of The Thing From Another World. Most scenes are cluttered and there are just too many characters on screen. This is different from The Thing, which had a much smaller, more close-knit cast. Having a smaller cast makes the movie feel more claustrophobic and frightening but I'm going to take points away from The Thing for the lack of a very important demographic: female. 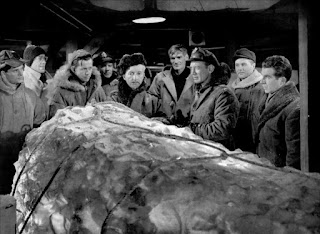 There are actually women in The Thing from Another World which is pretty damned important. We need representation in horror, specifically women who aren't 1. dumb and 2. easy victims. This is where The Thing from Another World beats its sequel. Margaret Sheridan's Nikki Nicholson is the best. Her sassiness never fails to make me smile. I love the bold way she stands up to the men (mostly jokingly), even tying up her dinner date so he doesn't get handsy. 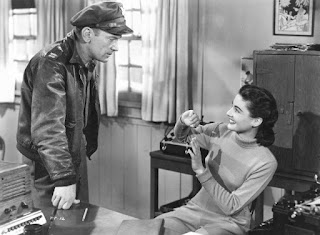 The other interesting thing happening here is the question of is the pursuit of science. Is science good? Is it evil? Will it lead to a better life or just to destruction? You see that battle most clearly when Dr. Carrington fights his companions to keep them from destroying the alien - and then is promptly destroyed by it. Guess that answers that question...


"And now before giving you the details of the battle, I bring you a warning: Every one of you listening to my voice, tell the world, tell this to everybody wherever they are. Watch the skies. Everywhere. Keep looking. Keep watching the skies."

I think most people reading this would have seen The Thing. I doubt that many would have seen its predecessor. Am I wrong? Let us know which movie you prefer!
Posted by Wondra at 10:00