Hello, Day 24 of 31 Days of Classic Horror, brought to you by Wondra and Jay. I've been looking forward to this one for a while because I love this movie so darn much. Let's talk about The Wicker Man (1973). 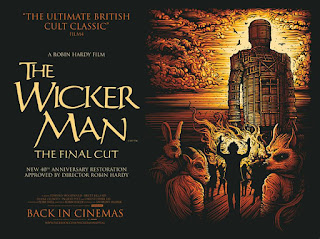 Sergeant Howie, played by Edward Woodward, is called to investigate the case of a missing girl on a remote Scottish island. While there, Howie's Christian values go head-to-head with the populations old school paganism. As he searches for the missing girl, Howie's beliefs are tested time and again, until the movie's iconic final scene, where the sergeant faces the ultimate test of faith.

Oh. Did I mention it's a musical?

I could go on and on but I'm going to give Jay the chance to talk about The Wicker Man. 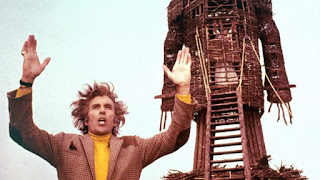 I first saw 'The Wicker Man' when I was, I'd say, about ten-years-old.I  watched it sneakily in my bedroom on the portable TV. I had to listen for my mum because it was past my bedtime. Luckily, I'd perfected the art of hitting the buttons on the TV with my foot to make it look like it was off.

I watched 'The Wicker Man' mostly for the nudity mainly (like I said, I was a ten-year-old kid) but was shocked to my core. That ending... The whole time, you think someone is going to save him or he's going to break out but no, he fails. He loses. Christianity loses. 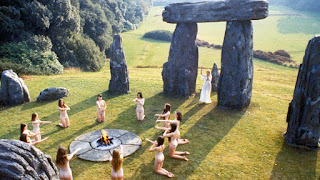 'The Wicker Man' achieved well-deserved cult status. The church did their damnedest to make the movie disappear but they failed. Christopher Lee swore until the day he died that the movie had been cut. He swore that there were at least twenty-five minutes cut by the church because they couldn't have paganism glorified. I wonder if we'll ever see the full version resurface?

I had reservations about The Wicker Man the first time I watched it. I get so sick of movies that pick and choose the parts of paganism they like and stitch them together in the most absurd ways possible to achieve their ghastly ends. Straight up pissed me off. So you can imagine how pleasantly surprised I was by The Wicker Man. 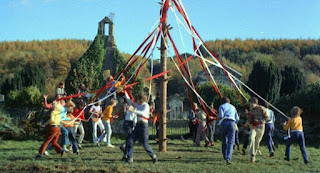 I've rarely seen a film so accurately portray paganism. And, okay, yes, they do get the timing of some of the rituals wrong but, overall, they do a brilliant job of representing paganism. You know how frustrating it is to have the "token black guy" in a film swearing, smoking pot, and getting killed first? Same thing with witches. We get sick of movies portraying us as pissed off lesbian teenagers with an axe to grind. The Wicker Man is a refreshing departure from those ridiculous tropes.

'The Wicker Man' was certainly one of the truest films I've ever seen about paganism. The best part is that paganism wins. That sacrifice goes ahead. And, you know, Howie is such a unlikeable character that you kind of enjoy seeing that thing go up in flames. 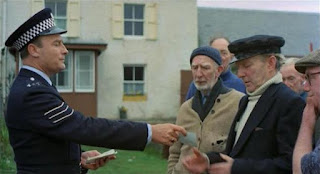 Sergeant Howie is pompous, arrogant, and forthright. You have to say how very well acted he was. Edward Woodward was a great actor. I grew up with him as 'Callan' and as McCall in 'The Equalizer'. The whole cast, really, is superb. Woodward, Cilento, Ekland, Pitt, and Lee. What else do you need to say? 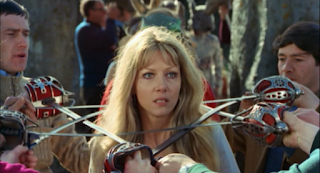 Cilento, Ekland, and Pitt do give really great performances. It's hard to say who I prefer. I love Britt Ekland as Willow, the landlord's daughter, who introduces local boys into the ways of lovemaking. (And drives certain self-righteous police officers nearly out of their wits.) Then, there's Diane Cilento's Miss Rose, teaching children about the phallic symbolism of the Maypole, and Ingrid Pitt as the librarian, who can act more defiance with a single look than most actors can in a whole movie. The men get all the credit in The Wicker Man but it's the women who hold the movie up.

Oh, and don't forget Irene Sunters's May Morrison, who plays Howie like the proverbial harp from Hell. 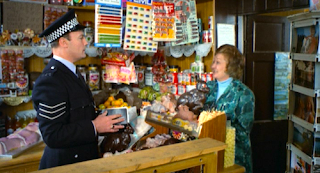 Sergeant Howie is tested every moment he's on that island and he passes every test because of his piousness, which makes him the perfect sacrifice. You really have to watch the extended version for his character development, to see just how righteous he is.

(You mean how insufferable. Gods, I hated the sight of his face by the end.) 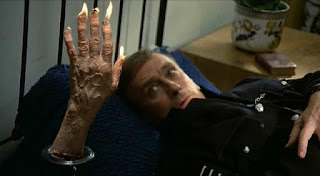 If this is happening on an island off Scotland right now, we need to move!

Did I mention The Wicker Man is a bloody HORROR MUSICAL? There are so few of those - fewer still that actually work. I'd go so far as to say The Wicker Man is THE horror musical. I have the soundtrack to this movie and listen to it often. I think my favourite song is the "Maypole Song", with "Landlord's Daughter" a close second.


And, before Wondra gets the chance to start singing - which she will - I'm going to cut in.

The music is folksy and very fitting but you don't notice straight away that it's a musical, because it feels so natural to the development of the story. It's like 'Carrie' in that it builds. The horror doesn't come until the end. What an end! 'The Wicker Man' itself isn't that scary but the end is terrifying. Just the end. You don't see it coming.

We're nearing the end of the time we have for today, which means that, unfortunately, we have to talk about the 2006 remake.

No we don't. The remake was utter rubbish. I'm not going to add anything more.

Hah. Okay. I concede. All I'll say about the remake of The Wicker Man is that Nicolas Cage is wrong for just about every role he's in but I love the symbolism of the bees. 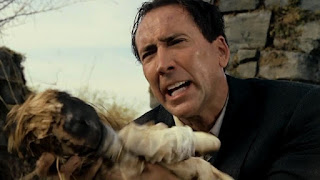 What about the 2011 so-called sequel?

'The Wicker Tree' is different. I had to watch it twice to appreciate it. It's okay but it doesn't pack the knock-out punch that 'The Wicker Man' did. It's more of a stand alone film than a sequel. 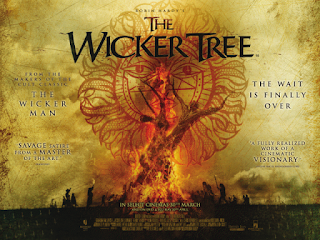 I'll agree with that. As a horror movie, The Wicker Tree is okay. As a sequel, not so much. I would have enjoyed it more if they'd called it something else.

And that's us done for the day, my friends. Do you agree with our assessment of The Wicker Man? Got your own comments? Let us know. Otherwise, we'll see you tomorrow for another great flick.
Posted by Wondra at 10:00