It's day six of our 31 Days of Classic Horror feature and we've reached John Carpenter's Prince of Darkness (1987).

In Prince of Darkness, a group of graduate students research an unusual cylinder hidden away in the basement of an abandoned church. That's over-simplifying things a little but, trust me, if you haven't seen it, you'll appreciate the simplicity. Before I launch into why I think Prince of Darkness is confusing, I'm going to let Jay explain why it made it to our list. 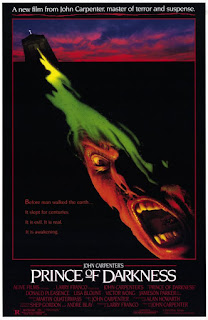 This is John Carpenter at his finest, with a great supporting cast. Even Alice Cooper has a cameo, which is a nice touch. Donald Pleasence is a ham actor but his hamminess is perfect for the role of the frantic priest... I don't think they ever mention his name, actually.

I don't think they do, either.

But that's not really important. The point I was trying to make is that Donald Pleasence needed to ham it up to make the role work. His desperation really comes through.

There aren't really any huge actors in Prince of Darkness. It's more familiar faces than top level actors, if that makes sense. Since we're talking about the cast, though, I have to point out that the students all seem too old to be students, even grad students. That always bugged me.

If we can get back to the movie...

I first saw this at an all-night horror show in Cardiff in about 1987. Prince of Darkness was the last show and I'd managed to doze through a couple in the middle but I woke up for this one. There are lots of jumps and twists, with a real bastard of an ending. I don't usually like endings where everything is left hanging but it's perfect for Prince of Darkness.

Right. You've got that feeling of it's-not-over hanging over your head. The whole movie is uncertain for me. Am I watching religious horror? Am I watching sci-fi horror? I think maybe the best thing to call Prince of Darkness is philosophical horror. It doesn't really tell you exactly what to think; it gives you a ton of information - some of it contradictory - and waits for you to decide for yourself what fits best.

Whether it's religious horror or sci-fi horror (I'm inclined to think a little of both.), it's brilliant horror. This is one you want to watch with the lights off and you can watch it several times without getting bored because you'll notice something new each time.

I mentioned before that Prince of Darkness is Carpenter at his best. It's also the last great score from Carpenter, before his music went all very much the same. The music is malevolent and foreboding. It feels like a warning.

I agree. You never get a break from the soundtrack. It's relentless. Even when it eases back, it's there, underneath the horror, biding its time. Really cleverly done. You've got to say that Prince of Darkness looks and feels like a Carpenter film. It's dark and shadowy, it's scary, and it'll give you the creeps - especially the end.

Yes, the end. The double-scare at the end is my favourite part of the film.

Hah. Well, I have to look away because I know what's coming...

Oh, yeah, big time. There are some good jumps in Prince of Darkness but it builds so well that you're waiting for jumps that don't happen. It keeps you on the edge of your seat, which is what makes it a must-watch horror movie.

And its uniqueness makes it a classic. There hasn't been anything else like it, before or since. If you haven't seen Prince of Darkness yet, you're missing out.

Do you agree? What do you think of our list so far? Get in touch and don't forget to come back tomorrow to see our next choice.
Posted by Wondra at 10:00