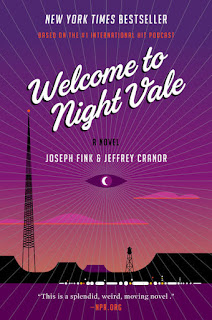 If you're not familiar with the podcast, you'll find Welcome to Night Vale delightfully strange and brutally honest in equal measure. It faces the strange brutality of life headon and says the things we all know but aren't suposed to say. (And, in some cases, are absolutely forbidden by law from saying.) In Welcome to Night Vale, the hidden truths of life lay right out in the open for all to read.

The snippets of Cecil's show through the book are such a great touch and I love getting to know some of the other characters in more depth. What I love most of all, though, is the novel's tone. Welcome to Night Vale is told in a way that's like a little nudge to the reader that says, "Yup, I know I'm a book and you know I'm a book but maybe these guys don't so let's keep it between us, okay?"

The fourth wall doesn't exist in Night Vale. It existed once but residents soon found there was no need for it, as the fact that one's reality is surely another's fiction is common knowledge. Scientists have recently confirmed this through vigorous testing via large machines with many flashing lights and occassional beeps.

I'm actually really upset that I got the ebook version of this one, instead of the audiobook because I bet it would have been amazing to actually listen to Cecil narrating it. I may have to get the audiobook version of It Devours, which is the second instalment of the series and also narrated by Cecil. (Maybe a good reason for keeping Audible?)

Give this one a try, even if you're not familiar with the canon. If you struggle with it, listen to something like five years' worth of podcast, then come back and try it again. If you still can't get into it, I'm sorry. There's nothing more that can be done for you.

I am shamelessly obsessed with Welcome to Night Vale but none of my friends are, which makes sad. If you've read this book and enjoyed it, we should talk. And, you know, probably be friends. That would be... neat.
Posted by Wondra at 11:00