It's taken me a long time to put together a review for Caddyshack. Why? Because it was so effing bad that I don't even want to talk about it.

When I was trying to decide which of my 100 Classic Must-See Movies (That I've Somehow Never Seen) to watch next, Jay said, "Do yourself a favour and watch Caddyshack." Boy, do I feel duped.

I had high hopes for Caddyshack because so many people I know (Jay included) rave about it. People make it out to be one of the best comedy films of all times. Why? WHY?!

Okay, I like Chevy Chase and I like Bill Murray, so that seemed promising. I'm still trying to figure out what the hell was going on with Murray's Carl Spackler, though. Was that guy always drunk or was he supposed to be, well, mentally unwell? Because... not. Funny.

Jay argues here. He says that Spackler was just "bloody minded" and that assuming he was meant to be challeneged was "a stretch." I have to disagree, of course, because that stupid thing he kept doing with his lip was so exaggerated that it had to mean something -- that, and the way other people in the movie treated him. 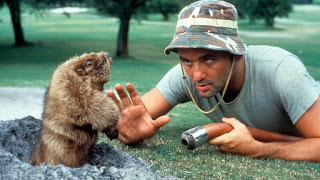 You know what else isn't funny? Rodney Dangerfield. I didn't know that Rodney Dangerfield was also in Caddyshack. If I had, I probably wouldn't have watched it. That guy is one of the most annoying creatures to have ever walked the planet...

From the start of the film, I was struck by how ridiculous it seemed. Come on, I get that you were trying to show that this kid comes from a large family but really? Is it even possible to have that many kids so close in age? It's not funny; it suggests in a very obvious way, at the very start of the film, that the women in this movie are just for fucking.

And, straight away, I'm pissed at Caddyshack, before I know what it's even about.

Except golf, of course. I knew that it was going to have something to do with golf. I should probably explain that I'm not a fan, so I was sort of expecting a certain amount of disinterest. So, to be fair, I had a certain amount of prejudice against this movie when I started it. Golf is just so boring. *yawn* 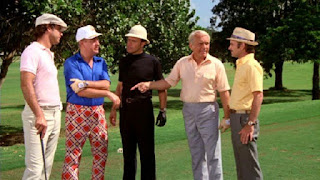 Caddyshack is essentially a movie about the dangers of envy -- if you can look through all the juvenile sex jokes to find anything resembling a message. (It's hard, trust me.) Everyone wants to have what they don't have, even while the movie portrays the people who do have it as unworthy imbeciles. So... envy is bad, m'kay?

The one bit I actually liked about Caddyshack was the Star Wars reference. Chevy Chase's Ty Webb is teaching his caddie, Michael O'Keefe's Danny Noonan, to golf in a parody of Ben Kenobi's blindfolding Luke and telling him to feel the Force. It's the only bit of the movie that got even a grin from me.

Caddyshack is painfully underacted by the majority of its cast -- and painfully overacted by the rest. There's no happy medium. You'd expect brilliant comedians like Chase and Murray to save the day but nope, even their performances were awful.

The role of women, the elderly, and black people in this film are entirely to be the butt of one joke or another. Women are masturbatory objects, regardless of their age. Black men are poorly-treated servants (or doling out "the best" pot because of course black people are all potheads.) The elderly are bumbling idiots that are always in the way. Basically, Caddyshack is a movie for young, middle-class, white dudes. It's a testosteronefest.

Seriously. Caddyshack is nothing but 1hr 38m of dick jokes, leering at women, and lame poop humour. 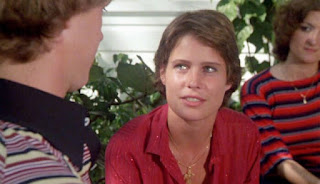 The one woman in the movie who isn't just a pair of braless tits, Sarah Holcomb's Maggie O'Hooligan, is only important as a side note in Danny Noonan's story. She's the tomboy character that should have made the "normal" girls watching feel better about themselves but, oh no, she goes from totally happy in herself to absolute rubbish the moment a beautiful woman in a swimsuit comes by for the guys to leer at. Then, when she makes the mistake of enjoying sex, she has to be punished by getting pregnant -- except, never mind, she's not because that would make Danny's life suck.

Not okay. Repeat after me: women do not exist only to further male plot lines!

There's nothing about Caddyshack that works for me. I know that I'm supposed to say that, despite it all, I loved the movie because of the gopher. Nope. The gopher was cute, sure, but not even a dancing puppet could save this movie.
Posted by Wondra at 11:07