I had no idea what I was getting myself into when I started watching Darkman (1990) and, honestly, that's definitely the way to meet Darkman for the first time: no expectations, just something to catch your jaw to keep it from hitting the floor.

Darkman is pure Sam Raimi brilliance, paired with the unmistakable sound of Danny Elfman. Raimi and Elfman, working their magic together? What more could you ask from a movie?!

Sam Raimi's influence means that Darkman is brutal but not overly gory. (Or, gory in a funny way, if that makes sense.) There's a lot more humour in Darkman than the title would suggest and, with Raimi at the helm, you wouldn't expect anything else. I knew it was a different kind of movie, right at the start, when I found myself giggling at gang warfare. It just got weirder from there.

Darkman follows Liam Neeson's Peyton Westlake, a scientist who is attacked and left for dead. Horribly scarred by the fire that should have ended his life and at the mercy of an experimental drug, Westlake continues his research into fabricating replacement skin tissue, which he uses in his search for revenge against the men who tried to kill him.

Man, that sounds a lot less strange that it actually is.

Before I get into how freaking odd Darkman is, let's talk about Peyton Westlake. Okay, it has to be said how different Liam Neeson looks. I can't believe how skinny he was! Can you believe he looks better now than he did back then? (That bastard!) But, anyway, that's not what I wanted to talk about. 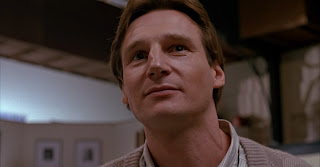 The one thing that bugged me about Darkman was Westlake's lack of apparent motivation. Before he was nearly killed, obviously, 'cause afterwards... yeah, that's pretty obvious. At the start of the film, though, he's crazy obsessed with making the artificial skin work but WHY? They never tell us what drives him, which makes his actions feel empty. Would it really have been so hard to give the guy a little backstory?

There's this moment in the film where Westlake is raging out over what the attackers did to him. He shouts, "They took my hands!" which is confusing for all of the reasons I've already mentioned. He was a scientist, not a surgeon so... having burnt hands sucks, yeah, but... come on. Give me more. Tell me why this is relevant. It's not really clear in the movie.

Speaking of Westlake's work, it's interesting to note that, over twenty years later, we're still a long way from the technology Westlake was trying to achieve. Do you think we'll get there? (More importantly, should we?)

I was impressed with Frances McDormand's Julie Hastings. Hastings was awesome because although her love for Westlake was clear, she was also obviously happy being her own woman. I love that she was a powerful, successful woman who didn't swoon the moment a man (even the man she loved) proposed.

I like Frances McDormand, anyway. She's not the typical beautiful but dumb woman you see in too many horror movies. (Is Darkman really horror? I suppose it must be, if Evil Dead 2 is.) McDormand isn't what some would call "classically beautiful" but, rather, strong featured, which I think is better. 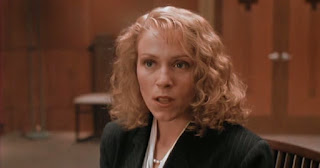 There's a great moment in the film, where she's squaring off with her boss, after realizing he was involved in Westlake's supposed death. Her strength is evident in the way she gives him an annoyed look and says, "if you're not going to kill me, I have things to do." And, later, she saves her own damned self from a guy with a gun. Bad ass.

Darkman is kind of a romance, kind of horror, kind of action, kind of comedy, kind of scifi, kind of a revenge flick, and also kind of gangster (as opposed to "gangsta".) It's... just a great big ball o'crazy that somehow works. I say somehow but, let's be honest, Raimi excels at crazy. And Darkman is so, so Raimi.

You can definitely see echoes of Evil Dead in Darkman, especially in Westlake's grotesque, melted face. Ugh. The way you see Westlake's teeth through the gauze/his half-melted face. Those teeth. That shit creeps me out so much. *shudder* 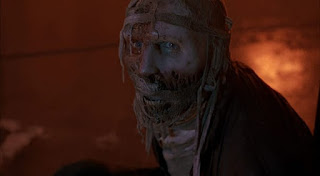 The cinematography is unmistakably Raimi. The wild, off-kilter camera angles mirror Westlake's growing insanity. Light and shadow are masterfully controlled in a way that, as Jay said, give the film an "an old school, monster movie feel."

Don't ya hate it when he's right? Lol.

When you see Westlake (I know I should be calling him Darkman by now but it's just easier this way.) in that kick-ass coat and hat, hidden behind a mask, watching fro the shadows, you really get the Phantom vibe. (There's also a moment in the graveyard when Westlake is looming between the graves, looking strikingly like Phantasm's The Tall Man - but that's not important.)

There's also a bit of the Phantom's madness in Westlake. His descent into madness is facinating. One moment he's his old self, cool and clinical, and then, the next, he's raged out. (Or, more disturbingly, a dancing fool.) Jay would say that Westlake is an anti-hero and, of course, he's right. But... Westlake is also more than that. He's absolutely manic in places, closer to super-villain than superhero (and a whole lot more fun to watch because of it.) 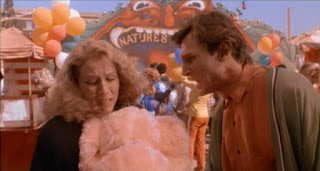 Darkman is a product of the Nineties -- something you see when you look at the technology. Technology that was meant to be more advanced than we are now looks older than it should have, even then. That's the problem with using technology in films, of course; it either looks timeless or out-dated. The technology in Darkman does not look timeless, if you know what I mean.

The computer graphics are a little rough around the edges, which you would expect from a movie of that time. The overlay used in Darkman is a method you don't really see in films much any more - and there's a good reason for that. Even if it's done well, it comes across as a little hokey. And, yet... Darkman is just weird enough that the dodgy graphics actually kind of work in its favour. (Or, at least, certainly don't hurt it.)

Where technology fails, symbolism flourishes. There are some really powerful moments in Darkman where symbolism is used to dramatic effect. Take, for instance, the photograph in Westlake's lab in which his face is burnt away. There's also the moment in the carnival when everyone is leering at the freakshow. And, of course, there's the way the mask Westlake wears of Durant's face melts away, which speaks to a loss of identity in a way words would fall short. 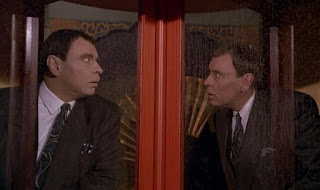 Overall, Darkman was a massive win for me. It's just freaking bizarre (I watched most of it with my mouth wide open.) but that just makes it more fun. I've been told that the sequels aren't as good. If you've seen this movie series, get in touch and let me know what you think. I'd especially love to know if you think the sequels are worth watching. (Jay says not.)
Posted by Wondra at 19:33