I was a little reluctant to watch Kelly's Heroes for one reason: I don't "do" war movies. They just don't interest me. Maybe it has something to do with the fact that my childhood was set to the soundtrack of the news blaring war updates 24/7, who knows? I just don't care for them.

Kelly's Heroes came highly recommended by Jay (though he also recommended Caddyshack so maybe we shouldn't give him too much credit.) It also boasted one helluva cast: Clint Eastwood, Telly Savalas, Don Rickles, and Donald Sutherland. I don't like war movies but I do like those actors so, hey, maybe it could work. 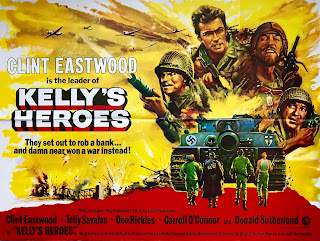 I won't lie. It got off to a rocky start. It really bugged me that Telly Savalas's Big Joe was obsessed with getting some action. Oh, yeah. Big Joe's all about "the girls." That's all he goes on about for half the movie.

Would I have been sorry if I had? Probably. Aside from the fact that there isn't a single speaking role for women in Kelly's Heroes (What the fuck, Hollywood? I'm sick of having to write that.), I actually enjoyed it quite a bit. You know... for a war movie. 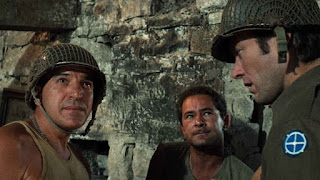 I think part of the reason that it's so enjoyable is that there's just about no historical accuracy in it whatsoever. I come from an army family and I can tell you right now, my childhood house was run with more efficiency than that platoon. (And isn't that just a little sad?) No one has any clue what anyone else is doing and no one cares much for following orders. It's absolute chaos -- which, I have to assume, is a commentary on the military itself. (I really hope it's meant to be a commentary on the military itself.)

One of the other reasons that I enjoyed Kelly's Heroes, even though it's a war film, is because it's not really about the war at all. The war is more scenery than plot. The explosions and gunfire are an... inconvenience. This isn't a movie about the war; it's a movie that just happens to be set during the war. Kelly's Heroes is really a heist movie.

I can do heist movies.

Kelly's Heroes follows a group of jaded soldiers, led by Clint Eastwood's Kelly across enemy lines in search of a stockpile of Nazi gold. These disobedient soldiers accidentally become heroes when word of their push through German territory reaches the bumbling Major General Colt (Carroll O'Connor), who sees their insubordination as an act of bravery. Oh, and spoiler: they get the gold. 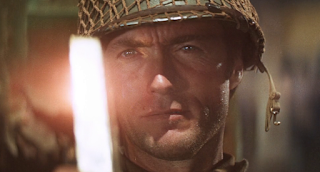 Even when they found the loot, I was sure that they would never get away with it. I kept waiting for shit to go south. It definitely had a feel-good ending, with everyone getting a bit of what they deserved, and I'm glad. I have no idea how they got the gold home, since they were all supposed to be returning to the front line, but I'm glad.

The reason that I'm happy that Kelly and his "heroes" get away with millions in other people's gold (Don't focus on that, do they?) is because the characters are - if not always likeable (in Big Joe's case) -- at least engaging and relateable. 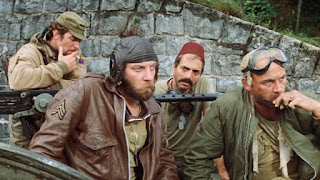 Sutherland's Oddball has to be my favourite character because, well, he's a freaking oddball. Just about the least likely soldier you've ever seen, Oddball is such a hippy - which is a little strange, given that this is a WWII movie. Although he would be right at home in a movie about Vietnam, Oddball is so out of place in Kelly's Heroes (Really, how many hippies were there in WWII?) and, yet, knowing that doesn't stop him from being beyond effing awesome.

Everything that shouldn't work makes Kelly's Heroes work. It's fun and funny. It's also very easy to watch. If you haven't seen it yet, I recommend you give it a go even if, like me, you don't like war movies.
Posted by Wondra at 09:00