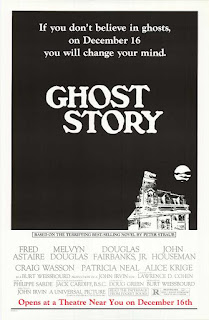 Ghost Story (1981), staring Alice Krige, Fred Astaire, Melvyn Douglas, Douglas Fairbanks Jr., and John Houseman, surprised me. I was expecting a hokey, old film and got a brilliant adaptation of a Straub novel. Good thing these gems keep popping up... I'd hate for my list of 100 Classic Must-See Movies (That I've Somehow Never Seen) to be dominated by movies like Caddyshack.

Peter Straub's Ghost Story was published in 1979 and the film adaptation of the best-selling novel came just two years later. Like the book, the movie focuses on a group of old men who call themselves the "Chowder Society" (minus one of the novel's protagonists, for whatever reason.) Ricky Hawthorne (Astaire), John Jaffrey (Douglas), Edward Wanderley (Fairbanks), and Sears James (Houseman) gather at night to tell one another scary stories. They are the wealthy, the powerful, the pillars of their community -- and they all share the same dark secret.

The pacing in Ghost Story is great. You don't get all of the information at once. All you know, as the movie starts, is that the old men are plagued by nightmares and something nasty is after David (Edward Wanderley's "successful" son.) I was impressed with David's opening (and, er, ending) scene because I wasn't expecting anything quite so nasty from what I assumed would be a rather stuffy film. 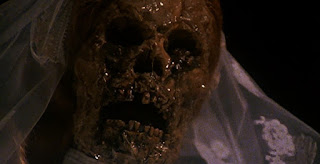 The special effects are pretty gruesome (in a typically 80s way) and they get worse as the movie goes on. I didn't get the connection between the ghost (Eva) tormenting Wanderley's twin sons and the Chowder Society at first. Then, the old men start buying it. The links are subtle, and not too in-your-face, which is a nice break from a lot of the horror films I've seen recently.

I love that you don't get to see the ghost's face until you already know who it is. Her face is always obstructed, or blurred, which helps build suspense. Even in the old photo Wanderley's son finds of the Chowder Society with a mysterious woman, her face can't be seen clearly. Ghost Story doesn't necessarily hide anything but it doesn't give you everything straight away, either. 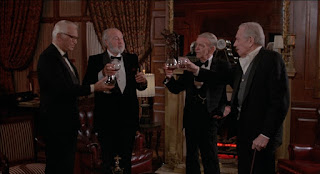 Do I have any sympathy for the old men? The rich, old, white men who clearly hold all the power in the town. Hmm...

What Ghost Story teaches us is that it's a mistake to think that old means cute and harmless. Our sins stay with us, no matter what else we achieve or how far we think we've buried them in the past. 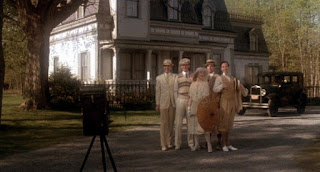 The score to Ghost Story helps add to the tension. It's strong, powerful music that successfully uses stings at the most exciting moments. You can also hear howling wind in several scenes, which is effortlessly atmospheric. There are also other noises all through the film (creaks, groans, etc.) that leave you wondering what is there and what isn't. The most powerful sound in the film, though, is Eva's laugh. That's some creepy shit.

It's interesting to note that the wives of the Chowder Society's members are clucky but mostly inconsequential. They're present, fussing over the old men, but don't have any real importance. A woman the old men haven't seen in over thirty years still gives them nightmares -- has more power over them than their own wives.

I mentioned the the wives fuss over the men quite a bit. The wives practically treat the husbands as invalids. This is interesting because these men, who ruined one woman's life because of their need to exert dominance -- and who all but rule the town they live in -- are married to women who see them as something inferior, despite their social standing. 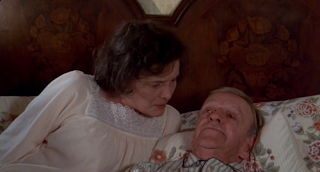 The subplot of Ghost Story is all about power and position. If you can watch this one without a healthy dose of rage at inherent male privilege, you're part of the problem.

It's pretty obvious that I'm a fan of Ghost Story but it is flawed in a couple of big ways. I had unanswered questions -- like how did Eva come back and why now? If these questions had been addressed, though, it might just have been the perfect (forgive me one bad pun) ghost story. Even as it is, though, it's a must-watch film.

If you've seen Ghost Story (or, even better, if you've seen it because of this review), please get in touch and let me know your thoughts. Do you agree with my anger at the Chowder Society? Do you think they deserved their fates? Did you jump like a wuss at any point? I'm not saying I did, or anything... (I did.)

Next time, a movie that I absolutely hated.
Posted by Wondra at 09:27