The Man Who Would be King (1975) is one of the movies on my list of 100 Classic Must-See Movies (That I've Somehow Never Seen) that Jay was most excited for me to watch. He's told me about it many times so I had a pretty good idea of what was going to happen, which left me free to pay more attention to the little things. Here's what you need to know:

This movie is an adaptation of a Rudyard Kipling novella. It stars Sean Connery as Daniel Dravot, Michael Caine as Peachy Carnehan, and Christopher Plummer as the author himself. Chance and a connection to the Masons connect the three main characters. Connery's Dravot and Caine's Peachy are what I believe you'd call "right geezers", with a plan for everything and the cheek to pull it off. This time, they're on their way to Kafiristan, a place where no white man has been since Alexander the Great, with the intention of setting themselves up as kings. 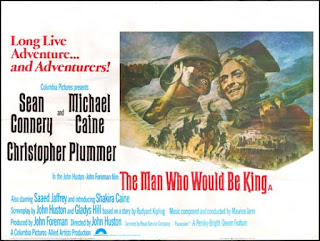 The Man Who Would be King starts with a lengthy tribute to the exotic nature of the Indian subcontinent. I had to wonder, as it dragged on, what exactly the makers of the film were trying to get at by focusing so heavily on the otherness of the natives and, to be honest, I didn't really get it. I assumed that it was just a commentary on the fact that between the time the novella was written and the time the movie was made, the British Empire fell to pieces. It's easy to imagine the visual love letter to India that opened The Man Who Would be King is just longing for "the good old days."

The more I thought about it, though, the more I realized that it serves another purpose. (Don't get me wrong, I think there's a good part of "No Empire, no more" going on there, too.) It's the otherness that's important here. India is pictured as wild, weird, and wonderful - but still so very British at the same time. No matter how bad it gets for Danny and Peachy in India, they can handle it because it has the familiarity and safety of home. 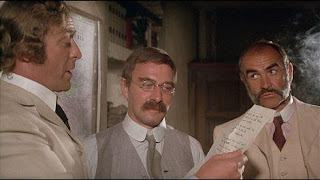 Kafiristan offers no such thing. While 19th century Brits see India as delightfully exotic, Kafiristan looms in the distance, inhospitable and unwelcoming. Wild, weird, and wonderful, yes. But it's important to see Danny and Peachy swagger away from trouble in India, so that you feel the danger more prominently when they face trouble in Kafiristan. As Jay would say, "They ain't limpin' away from this one."

Well, that's not exactly true... but I don't want to give too much away.

It's interesting to note Danny & Peachy's attitudes to the military before they leave India. I wouldn't say that it's overtly negative but there is a sense -- and it's one that's still very relevant today -- that the military uses you up and spits you out, without so much as a pat on the back.

When they meet the District Commissioner in his office, he asks why they never went home after the the end of their service in the army and Peachy replies, "Home to what? A porters uniform outside a restaurant, attainin' tips from belching civilians for closing cab doors on them and their blowsy women?" Daniel seconds this with, "Not for us, thank you. Not after watching Afghans come howling down out of the hills and taking battlefield command when all the officers had copped it." Talk to any former soldier struggling to find meaning after coming home from the Middle East and I think you'd get a very similar sentiment. 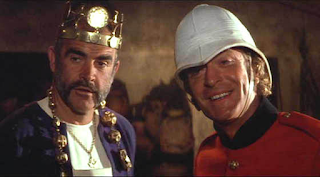 Why do I bring this up?

Because the first thing Danny and Peachy do when they finally reach Kafiristan is train the first bloody tribe they find to BE SOLDIERS.

"Now listen to me you benighted muckers," Daniel tells the sorry group of men in front of him. "We're going to teach you soldiering. The world's noblest profession. When we're done with you, you'll be able to slaughter your enemies like civilized men." The two ex-soldiers do to the Kafiristanis exactly what's been done to them. (The fact that I can't wrap my head around this might be exactly the reason why, though I come from a military family, I never once considered enlisting myself.)

That shit doesn't make sense, y'all.

Except, of course, that it does in a really sad way. We all exercise power over others by doing to them the wrongs done to us by others. It's a terrible cycle.

The whole first third of the movie sets up parallels for the third. (With a journey into the unknown taking up the middle.) The foreshadowing in The Man Who Would be King is effortless. My favourite bit is in the line, "We don't kill easy." I hear that and I expect someone to die in the next couple of minutes. It was so much better in The Man Who Would be King because, know what? They don't kill easy. 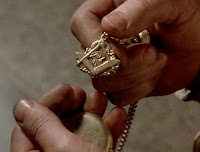 Danny becomes what he always dreamed of being in Kafiristan when an opponent's arrow embeds itself in his leather bandolier during a battle. He pulls out the arrow and carries on but the Kafiristanis see this "miracle" as proof of Danny's divinity -- something confirmed when the high priest, Kafu-Selim (played by an actor who, by the way, was over 100!), orders his death. Danny's shirt is torn open, revealing the Masonic Square and Compasses given to him by Kipling before their journey began.

Good thing Alexander the Great, whom the Kafiristanis worship as a god-king, was also a Mason!

At first, Danny & Peachy stick around because they know they'll never get through the treacherous mountain pass back into India until winter has passed. During this time, Danny soaks up the adoration and worship, dolling out law as he sees fit. All goes well -- for a while. Unfortunately, it doesn't take Danny, presumed son of the god-king Alexander (they call him "Sikander"), long to start believing the lie.

You see the first signs of Danny's delusion taking hold when he pulls his old friend to the side and tells him, "If we're gonna make it stick that I'm a god, you ought to bow when you pass in front of me like everybody else." Peachy sees right away that something isn't right. 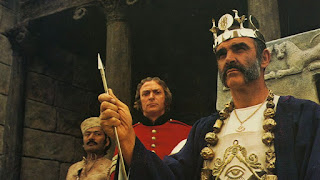 By the time he tells Danny the pass is clear and Danny insists that he's not leaving, you can tell Peachy knows his companion -- his "brother", to use the Masonic terminology Kipling favoured - is lost. When Danny defends his decision with, "This isn't the first time I've worn a crown" (ie: he actually thinks he IS the reincarnation of Alexander), the look Peachy wears isn't one of surprise; it's one of pain.

The Man Who Would be King is a testimate to three fine actors. Connery, Caine, and Plummer all excel at their craft but, for me, Caine's performance steals the show. Even when Danny's lies are discovered, when he should cut and run, his madness drives him to fight on. Caine's Peachy, though, watches the proceedings with an assessing eye. 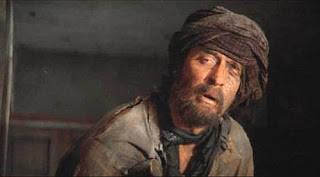 He's the planner, the thinker. Peachy communicates their intentions with strangers they meet on their journey to Kafiristan, while Danny plays the dancing fool. He guides Danny through the blizzard that blinds him (so much symbolism it hurts...) and does the math when Danny struggles with it.

I'm going to draw a line here. I don't want to ruin the end of the movie for you, if you haven't seen it, but the ending really hits you in the chest. I knew what was coming, thanks to Jay, and I still bawled. But, anyway, I was talking about the actors, wasn't I?

The sign of their talent is that I hated Connery's Danny by the end but adored Caine's Peachy. Plummer is in less of the film but he does such a brilliant job of giving us Kipling's shock and horror that his small performance is absolutely vital to the film. 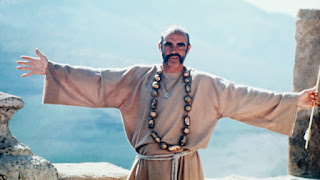 I don't know what else I can say about a movie like The Man Who Would be King except that, despite a few minor annoyances (things like the inescapable sexism of the period and the cringe-worthy, old "night filters" used in the 70s), this one's a real masterpiece. I lost myself in it and I think you will too. Is that down to Rudyard Kipling's storytelling ability or amazing performances by some of the best actors of the time? I'll leave that up to you to decide.

As always, leave a comment below if you want to add anything or if you have any suggestions for next year's list, which I'm already building. Next time, some classic horror. See you then.
Posted by Wondra at 12:07