Today, we're going to be talking about the seventh movie I've chosen to tackle on my list of 100 Classic Must-See Movies (That I've Somehow Never Seen) and the one I've liked the least. Let's be honest, I hated this movie.

Jay called Orca "the whale equivalent of Jaws." Jaws did well, he said, "so let's make whales scary." He continued with, "wales are worse killers than sharks, you know, but because you see them at Sea World, everyone just thinks, 'Oh, how cute.'" 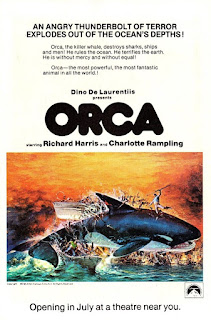 Orca doesn't feel like a horror movie at first. It feels more like a nature documentary, even after it switches from shots of the whales to a classroom lecture on the animals. I don't know how much of the lecture is accurate but it's clear that the professor, Charlotte Rampling's Rachel Bedford loves (damn near worships) the animals.

It took almost no time for me to decide that I hate Orca. Early in the film, Richard Harris's Captain Nolan decide's he's going to catch an orca and sell it to a zoo as a get-rich-quick scheme. (He's been killing sharks up to this point.) So, he tries to catch an orca.

Does it go well? About as well as catching a whale with a harpoon could possibly go.

I was done with this movie the moment the whale started screaming. Yes, screaming. Done. When she tried to kill herself by throwing herself into the ship's propeller, I was ready to throw something at the television. When she aborted her calf onto the deck of the ship? I wanted everyone associated with the film to stop by so I could punch them right in their stupid faces.

It's pretty obvious that I don't do well with animals getting injured but, really, the whole thing was painfully gratuitous and disgusting. It went too far.

Jay argued that "it had to be that bad." He said that it was necessary for that part of the film to be "graphically unpleasant" so you understand what drives the whale but I was thoroughly traumatised.

This was about the time I reached for the remote. Jay had to assure me (several times) that no more animals would be harmed (only humans) before I would put it back on. Boy, I really didn't want to.

If you're not familiar with the movie (and, for your sake, I hope you're not), the other whales mourn the female's death, then her mate beaches her as a warning. The shark in Jaws is just an evil fucker; this whale just lost his woman and child. He wants revenge and he's going to torment the whole damned town until he gets it.

Here's the thing: I wanted him to get revenge. There wasn't a single moment of the film when I was rooting for the humans. Nolan was completely unlikable in every way -- which is pretty hard to say, since he's DUMBLEDORE, and all. In Orca, though, I freaking hated him and wanted to kill him myself.

Nolan wasn't just greedy, he was also as ignorant as they come. He set out to catch a whale, without any plan for bringing her back safely. He didn't know the first thing about whales and had no interest in learning about them. Worse than that, he took no responsibility for his actions.

Captain Nolan's wife and unborn child died long before the start of the film. It's obvious that they wanted to try to draw parallels between their deaths and the death of the female whale and her calf but... 1. Nolan's wife's death was an accident; the whale's wasn't. There was nothing accidental about that. 2. Nolan expresses disgust when he sees the fetus (to the point of freaking out) but he has no compassion toward the calf's dying mother. If the makers of the film wanted his wife/child's deaths to be meaningful, they really screwed up.

If you think I'm overreacting about the deaths of some animals (fuck you), let's look at the human lives he screwed up. Nolan's crew paid the price for his ignorance. The men all died and Bo Derek's Annie was left maimed. Sure, Nolan bought it too but he had it coming.

It's interesting to note that Annie and Rachel, always portrayed as smarter than their male counterparts, were the only characters to show any compassion toward the whales. The men were matter-of-fact, callous or indifferent, while the film's women were its conscious.

Even when Nolan supposedly grows as a character, it's uneblieveable. He says of the whale, "He loved his family  more than I loved mine," showing that he understands that the orca is a better man than he is. I know you're supposed to feel sympathy for him but... nope. Sorry (not sorry.) Too late.

There was one thing that I like about Orca. Will Sampson (from One Flew Over the Cuckoo's Nest) made an appearance. I did a little squeal of delight when I saw him, then went back to scowling angrily at the screen.

I think that's really all I have to say about this one. Next time, an action flick.
Posted by Wondra at 19:17