Movie Review: Battle Beyond the Stars (1980) 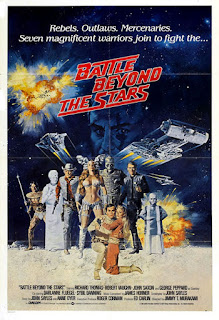 As we sat down to watch Battle Beyond the Stars, Jay shook his head and said, "I don't know what you're going to make of this one..."

I was surprised to learn that Battle Beyond the Stars is a Roger Corman film. Then, I watched it and... oh, yeah. Totally a Corman film. (If you're not familiar with his work, just assume Corman is a synonym for "cringe-worthy.")

Battle Beyond the Stars is more like a sci-fi movie from the 60s than an 80's film, although the intro is painfully of the Eighties. The sets are exactly as dodgy as you'd expect a 60s set to have been. It really doesn't hold up well against other sci-if movies of the day.

The cast is pretty decent, though. You've got George Peppard, Robert Vaughn, John Saxon, and Richard Thomas, for starters. If only a good cast could guarantee a good movie...

It does not. Apparently, a good cast doesn't even guarantee good acting. There was some stellar acting in Battle Beyond the Stars (pun intend, of course.) This is what happens when bad movies happen to good actors.

I've been trying to think of a way to describe Battle Beyond the Stars and the only thing I can say is imagine every sci-fi cliche you've ever seen, then put them all in one movie.

Boy, do I wish I was exaggerating...

John Saxon's Sador was your typical deformed baddie with ugly henchmen. Because the Big Bads have to be disabled and their henchmen have to be ugly, right? Okay, to be fair, there's more to it than that. Sador is more of a cautionary how-much-can-we-replace-and-still-be-ourselves cautionary villain but you get the point. 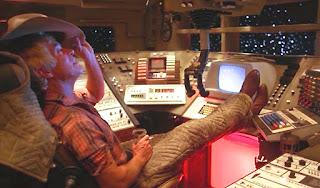 Meanwhile, John Saxon swaggers in with his booze belt and rebel flag, proving there are even rednecks in space. And let's talk about Sybil Danning's St. Exmin for a minute.

Since we're talking about cliches, we may as well get the big-haired space bimbo out of the way. I swear the woman had to have changed her outfit a million times, each one more ridiculous than the last. And, for a Valkyrie-type race, she was a lousy fighter with the most ridiculous, girly scream. 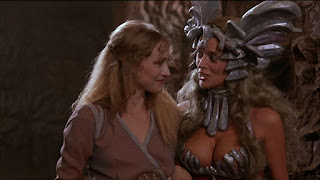 I'm amazed St. Exmin's enormous, heaving bosom didn't single-handedly set women in sci-fi back thirty years. She was there, as far as I can tell, for no other reason than to be the over-sexed temptation for the sweet, little virgin boy. As Jay says, St. Exmin was basically "a demented Playboy bunny in space." 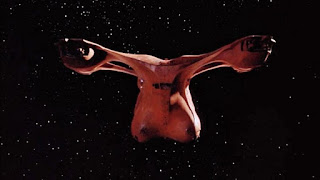 There was only one part of the movie that I really enjoyed and that was the uber sarcastic computer, Nell. Of course, Nell was part of a spaceship that was shaped like a massive ball sack but, hey.

I'm still not 100% certain if I know what the message of the movie is supposed to be. When it started, a race of peace-loving people got wiped out of existence, suggesting the theme was going to be something along the lines of "Nice guys get their asses kicked." But, in the end, Richard Thomas's Shad leads his people to victory. Except, well, the band of reformed mercenaries he enlisted to help him ALL die. So... the moral is... um, everyone dies except the virgins? 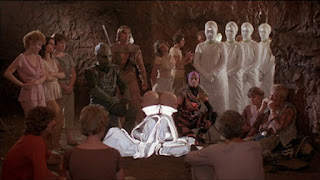 Guess I'm still trying to figure out what, exactly, the point of watching Battle Beyond the Stars is. I'll let you know if I ever figure it out.

Despite how awful this movie was, it's surprising how often references to it have popped up in other things. The Dial-a-Date machine in Gelt's hideaway reminded me of a similar machine in Demolition Man and there was a touch of the Peppard's Cowboy in Spaceballs's Lone Starr. Oh, and let's not forget the frightening similarities between Saxon's Sador and Futurama's Zapp Brannigan. Clearly, there are plenty of people out there who got more from this movie than I did.

Next time? Maybe some action/adventure.
Posted by Wondra at 18:47 No comments:

The Hazel Wood is the kind of book you want to start reading again the moment you finish it. It's snarky and relevant -- with just the right amount of melancholy. 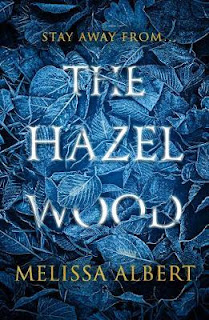 I thought, when I started this one, that the author's loose attitude toward grammar and semantics would drive me a bit batty. Yeah, I still cling to those old-fashioned rules that were drilled into me in school. My failing, not the book's. This is a novel for a new generation of readers whose focus is on the message, rather than the format. It just works.

The language and vocabulary used give The Hazel Wood an ultra-modern feel. It's conversational and easy to read, even if some of the words had me running to Google! (I might be getting old but I'm still good with slang. It takes a word that's pretty far out there to stump me.)

I picked up The Hazel Wood because I thought it was going to be about faeries There's a helluva glut of faerie stories out there at the moment (Is it safe to say faeries are the new vampires?) but The Hazel Wood isn't really about faeries, even though faerie tales are its heart. It's more like Neverland grew up, developed an attitude problem, started smoking clove cigarettes, and ran away from home.

And it's exactly as cool as that sounds. 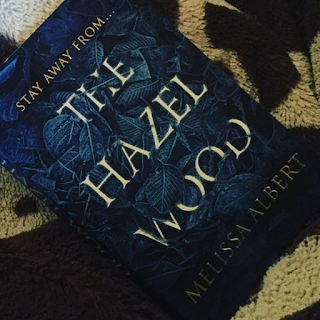 There are things about this book that made me fall in love but, honestly, I was lost from the first line: "My mother was raised on fairy tales, but I was raised on highways." Sometimes, a good author creates prose so beautiful that it reads like poetry. This is one of those times.

The whole time I was reading The Hazel Wood, my fingers itched for a highlighter. There were so many lines I wanted to save, to come back to, to share -- lines that, while fiction, held a painful amount of truth. The kind of sentences you want to gobble up so you don't lose them but equally want to sit and savour the taste of.

Honestly, I hate first-person YA literature. It usually seems like such a cop out. The Hazel Wood, though, wouldn't have worked if it hadn't been in first-person. You need that helplessly lost feeling that only comes when you're looking at the world through someone else's eyes. You need to fall when Alice falls, to feel her success (sort of) at the end. 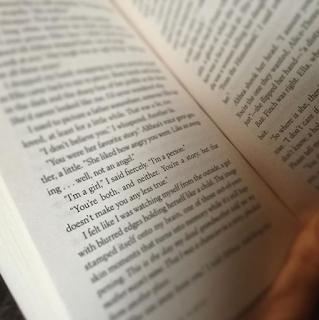 The other things I loved? Well, let's talk about the love interest. Or, well, not-so-love interest. Which, of course, is the point. The Hazel Wood isn't about some girl falling for a boy and them fighting to be together. It's about a girl and her mother. A girl deciding her own fate, deciding who she gets to be. Our daughters need these books.

I've already hinted at a darker ending and that's what you get with The Hazel Wood. Don't worry, though, it's not so dark that you walk away feeling cheated. It is a happy ending. Kind of. If you look at it a certain way. Okay, it's the right ending, which is more important, anyway. (Might want to have a chocolate bar nearby for when you've finished, just to be safe.)

I can't recommend The Hazel Wood highly enough. It's the kind of book you could easily lose yourself in and finish before you realise how long you've been reading. The only thing that disappointed me about it was that it didn't come with a companion volume of Tales from the Hinterland. I'm dying to read those stories!
Posted by Wondra at 17:23 No comments: