It would be pretty hard to exist as an adult in our society without having at least an idea of what The Towering Inferno (1974) is about. There are countless pop culture references to the film and, even if you had somehow missed them, you could guess what it's about because, well, the name kind of gives it away. You know... big thing on fire. 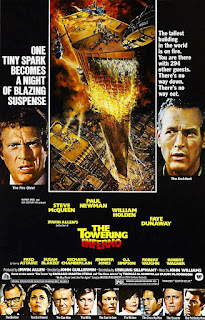 Jay admitted, as we sat down to watch this one, that The Towering Inferno was responsible for a childhood phobia of his. "One of my biggest fears as a child was fire," he explained, "and this is why." He hadn't seen it in over thirty years, so it was interesting to watch together.

I found The Towering Inferno both frustrating and fascinating, in equal measure, but definitely didn't think it was scary. Of course, I'm not a kid but, hey, I am a big wuss so, you know, same diff.

Although The Towering Inferno isn't scary, there are some pretty alarming images. I'm not surprised that Jay grew up terrified of fires after seeing it. The sight of those burning bodies definitely stays with you, even if you know it's make-believe.

There are also echoes of 9-11, with people throwing themselves out of windows to escape the fire. Trigger, trigger. Disturbing stuff.

The Towering Inferno is not easy watching. Let's get that out of the way first. This shit's an epic at almost three hours long. (Wowza.) It's not one of those three hour movies that fly by, either. It's work. But, it's still worth watching, if you haven't seen it.

It's especially relevant now, a year after the Grenfell tragedy. And by relevant, I mean it should piss you the fuck off, if you've been paying attention. Here's this movie made forty years ago, with this massive warning about cutting corners, and what did we learn? Not a damn thing. Like I said, frustrating.

So... a couple of things about the intro to The Towering Inferno. One, I was surprised to learn that it's an adaptation of a 1973 novel by Richard Martin Stern. I can't help but think that it must have been awfully popular to have been made into a movie just a year later but I'd never heard of it until now. Guess it was overshadowed by the movie...

I love that the movie was dedicated to America's firefighters. It was a really nice touch, and made it clear that The Towering Inferno is suppose to mean something, not just rake in the bucks. The movie gets extremely heavy with the morality as it goes on, though. What starts as a nice message turns hella preachy by the end.

The last thing I want to say about the intro is that it is too damn long. And, mostly pointless. I'm a big fan of backstory but come on. Get on with it, already!

In general, The Towering Inferno feels it's age. The fashions and cars are painfully dated. Technology, too. The computers are massive! As dated as the film is, though, there's something that a lot of modern films could learn from it.

Sign language is used quite frequently through The Towering Inferno because one of the - I hesitate to say "main" because the cast is huge - characters is hearing impaired. You really get the sense that this movie was way ahead of its time, even as it was totally of its time.

Another thing about the age of the film... I didn't really get all the hype over a new skyscraper. Jay had to explain what a big deal it was at the time. "We don't really look at what an achievement it is anymore," he told me. "It was, you know, a big thing. Think of all the jobs it meant for the community." It definitely helped to have someone around who lived through that time.

This is a movie with a massive cast, most of the names quite well-known. The only problem with that is trying to keep track of everyone's name became impossible before half the cast had seen screen-time. I mostly had to resort to using the actor's name. 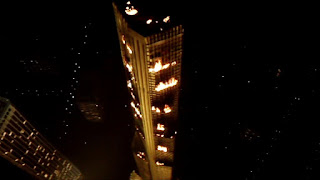 The Towering Inferno is an indictment of human greed. It was all about how big the thing could be made at what little cost. The owner's son-in-law cut every corner imaginable but the blame isn't entirely his. The architect could have checked at any time to make sure his specs were being followed. The owner could have asked why everything was so cheap. No one did. They were all equally to blame but, of course, no one would take any blame, even after the fact.

They have plenty of warnings that shit is about to get bad but in that Titanic idealism, they're certain that they'll be fine. ("Not this building!") Even after the fire starts climbing, the party-goers aren't all that worried. "It can't possibly affect us up here," one says. Not only is that "unsinkable" mentality, it also speaks to some of the other themes running through the film.

In addition to greed, The Towering Inferno addresses issues of class, gender, and race. You can't ignore the role of class in this movie. The party must go on, even though part of the building is on fire. Would the firefighters have tiptoed around the party-goers if they hadn't all been filthy rich? Doubt it.

Though, to be fair, there was less in-fighting amongst the rich people than I expected. They mostly waited patiently and followed orders. (Mostly.) I'm not sure that's how things would really go down if it actually happened in real life... 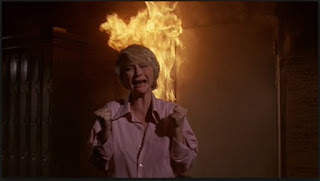 I'm not sure I can go into the role of women in The Towering Inferno as much as I'd like to. It's one of those things that needs its own blog post. I'll try to skim over it, for your sake. The women are mostly useless, as usual. A woman dies because a man lies to her until it's too late to do anything. A woman hellbent on having a career changes her mind and wants a family after the tragedy. A woman is the reason they can't escape via helicopter (because she freaks out.) More than one woman dies pointlessly. And on, and on.

It's pretty damned frustrating to watch The Towering Inferno as a woman.

I think it's important to also point out the roles of the film's black characters. You've got the experienced black firefighter and the level-headed black security guard who keeps his shit together when the people around them are losing it. It wasn't black men who brought tragedy down on their heads; it was white men. I think we would be doing The Towering Inferno an injustice if we ignored that fact.

I've already discussed things like class, race, gender, and greed but I haven't touched on the military's role in the film. Well. The people behind this clearly had some shall we say... critical ideas about the military. Let's be honest, they're completely useless.

Like I said before, The Towering Inferno gets kind of (so, so) preachy at the end. It definitely doesn't pussy-foot around political issues. "Why didn't they design survival suits for us like they did football players?" is a direct jab. I think (because it is entertainment, after all,) that they could have tried a little harder to make the point without cramming it down anyone's throat. Even though I agreed, I still found myself rolling my eyes at times because it was so blatant. 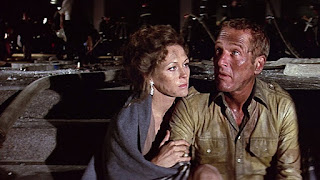 All in all, I found The Towering Inferno too heavy-handed with its messages. The special effects were good, with the exception of outdoor shots (when the flow of water gave away the size of the model.) Was it a good movie? Hard to watch in places (horribly morose, in fact), but yes. Do I have any intention of watching it again any time soon? Hell no.

When the film was over, we had a long chat about the difference between epics and blockbusters. Jay called The Towering Inferno "quite an exciting little film." He went on to say that the real difference between an epic and a blockbuster wasn't length but that epics "sell themselves on their own merit, without Jaws-style marketing." I think that's as good a way to look at it as any.

Lots still to watch on my list of 100 Classic Must-See Movies (That I've Somehow Never Seen). Next time? Let's go back to space...
Posted by Wondra at 14:00