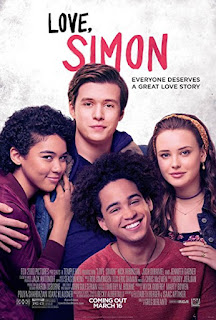 Love, Simon (based on Becky Albertalli's Simon vs. the Homo Sapiens Agenda) earns a place next to coming-of-age greats like Sixteen Candles and Mean Girls. A generation of people will one day be talking about Love, Simon the way us Nineties kids get nostalgic about 10 Things I Hate About You. Let's have a look at what makes Love, Simon an instant classic.


"I'm just like you. I have a totally perfectly normal life except except I have one huge ass secret."

Simon Spier (Nick Robinson) is just like everyone else. Mostly. Except for that mammoth secret he's been hiding since he started having naughty thoughts about The Boy Who Lived.

Simon learns through a post on his school's blog (Bloody hell! I don't even want to think about what life would have been like if that had been possible during my school days!) that there's another boy in his grade who's hiding the same secret. They start talking but keep their identities secret by using false names, Blue and Jacques. Simon ("Jacques") falls hard for his email penpal but then, as it usually does in these films, it all goes wrong.

Logan Miller's Martin is crushing hard on Simon's friend, Alexandra Shipp's Abby. Instead of doing the right thing and just approaching her, Martin chooses the dick move. He happens across Simon's emails when the other boy forgets to sign out of a shared computer (tsk, tsk) and screenshots them to use in blackmail. We're going to come back to that later. Just remember that word: blackmail.

Okay, so Martin is blackmailing Simon, who does what the little creep asks and tries to hook him up with Abby, even though his other friend, Jorge Lendeborg Jr.'s Nick, is totally into her. In an effort to distract Nick, Simon tries to set the other boy up with Katherine Langford's Leah -- who just happens to be in love with Simon.

I so do not miss high school.

Well, it's a feel-good movie so I'm sure you know by now that everything works out in the end, even though thinks get really bad for Simon there for a bit. I'm not going to dwell on that because there are some other things I want to talk about. Let's get to it.

Firstly, Love, Simon is just too freaking cute. I loved it. It's maybe a little too perfect in that everyone-has-the-best-of-everything way but that's why we go to the movies, right? I kind of like the fact that Simon's life is seemingly perfect because that's the point. No matter how great everything seems on the outside, you never know what people are struggling with on the inside.

There's a moment in the movie that perfectly embodies this. Simon and Ethan (Clark Moore) are sitting in the school's office when Simon tells the other openly gay boy that he's always been jealous because of his being out. Ethan gives him a rueful smile and tells Simon that his life isn't as easy as he thinks it is. No one really knows what anyone else is facing but we're all walking around being jealous of one another.

I won't lie. It makes me a little sad that we still need movies like Love, Simon in 2018. Why are we living in a world where kids feel like they have to hide their sexual preferences? As Simon says, "Why is straight the default?" It wasn't until I watched it the second time that it really clicked. It wasn't about having to come out. Coming out is the ultimate acknowledgement of self. This is me. This is who I am. That was why being "outted" mattered to Simon.


"I don’t care if you didn’t think my coming out was gonna be a big thing, Martin. You don’t get to decide that. I’m supposed to be the one that decides when and where and how and who knows and how I get to say it. That’s supposed to be my thing and you took that away from me."

It's kind of funny. My prom king and queen were both gay. It wasn't out of the normal in my school -- and that was nearly twenty years ago, but anyway...


I can't let a review go by without talking about feminism. You know what Love, Simon has that we HAVE to talk about? A woman who falls for a guy she can't have. Leah doesn't try to force Simon to love her back. She doesn't force herself on him physically. She doesn't try to insult or embarrass him. She realizes that there's nothing she can do about it and moves on with her life.

I kind of grumbled about Martin already but I'm gonna gnaw on that bone some more because he pisses me off. He's not some poor kid, desperate for love. He. Is. A. Criminal. Martin is the film's big bad. The thing that I like about the ending of Love, Simon (besides the aww factor) is that it doesn’t let Martin off the hook. It doesn't openly condemn him (which it should have) but he is left out of the happy ending, which is a start.

My hero of the film is Rothwell’s Ms. Albright. There's a scene in the cafeteria that takes place after Simon is outted. Two douchewads (I'm not going to try to call them anything else.) dress up as the school's only out pupils (Simon and ), then imitate sex acts on top of a table.

Simon gets up to tell the douchewads off but Ms. Albright takes over and schools their asses.

"Don't 'Hey, Ms. Albright' me. We're not friends. You're not going to braid my hair or paint my nails. Get your asses off that table now, you sweaty, hormonal virgins. You know what, you're about to be suspended for so long that by the time it's over you're gonna be the fat, bald, unhappily married, wildly mediocre nobodies you're destined to become... You're just those two assholes that did that shitty thing in front of the whole school and guess what. Nobody feels sorry for those assholes."

I hope that Love, Simon has helped open a dialogue between parents and children. And between friends. And, well, just with everyone. If we still need movies like this, we still need to have these conversations.

So, since Love, Simon is essentially a coming out story, I suppose I have to share my own.

I consider myself to be on the fringes of the LGBT community because I'm pansexual -- a word I didn't really know or understand when I "came out" over a decade ago. At the time, I used the only word that even came close to how I felt: bisexual. Imagine being a newlywed trying to tell your husband that you're bisexual. (And then spending the rest of your life explaining that "bisexual" doesn't mean "polyamorous.")

It never occured to me that being bisexual was supposed to be a secret. I didn't know that I was supposed to make a big announcement or something. But, when I casually mentioned in a post on Facebook, the shit hit the fan. See, my redneck sister and her brood of homophobic children couldn't get their heads around it. My friends and family started fighting with each other. It got nasty quickly.

A dozen "blocks" later and the world seemed right again. I reevaluated my sexuality again a few years ago when I met a fellow pansexual and thought, 'Omg, THIS is what I've been feeling.' And, if you're not sure what pansexuality is, it means I couldn't give a shit what's between your legs. People are people.

Hearts, not parts, y'all.