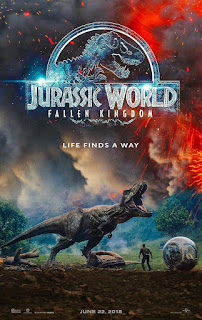 The Jurassic franchise has some of the best sequels in film history. What I mean is that it consistently provides great sequels, which happens so rarely in large franchises. Often, the first one or two will be amazing but, by the time you get to five, it's not even worth watching. There are exceptions, of course, in franchises like Star Wars and Harry Potter.

Notice that we're talking about the world-changers, here -- franchises that become so entrenched in our cultural literacy that they've become part of what our world now is. I think it's safe to say that the Jurassic films fit into this category.

Fallen Kingdom is, in my opinion, the best, the strongest, of the Jurassic sequels. It took me on a roller coaster ride but, instead of leaving me drained at the end, I was pumped. I wanted to walk right up to the ticket counter, get another ticket, and head right back in to ride it all over again.

(Yeah, the hubs vetoed that one, even though he agreed with the sentiment.)

If you're asking yourself why I was so excited about this film, stop. I've got 10 Reasons to Love Jurassic World: Fallen Kingdom for you, right here.

(FYI: I don't think there are any massive spoilers in here but if you're worried, don't risk it. Go see the movie now and come back to see if you agree with me when you're done.)


1. Jeff Goldblum
If you don't love Jeff Goldblum you can fuck off now, thanks. As Franklin says, "We're not compatible." Aside from being gorgeous and well-dressed (or, as Jay would say, "dapper as fuck",) Goldblum has a way of speaking that I find mesmerising.

There's also the fact that Goldblum's Ian Malcolm is there as a representative of the franchise's first two films and we all love a cameo. It's no coincidence that Malcolm was the one arguing against the dinosaur park in Jurassic Park and Lost World. He's not just here for the yumminess or the OMG-remember-that-guy, he's there as the reminder that "Life finds a way," which is why it's perfect that Fallen Kingdom essentially starts and ends with Malcolm.

2. Fuck Trump
Ted Levine's Ken Wheatley (aka: The Great White Hunter) embodies everything that's wrong with Trump and his supporters. He's the gun-totting jackass who thinks he can do whatever he wants without reprocution and who only cares about when he's getting paid. He's the trophy hunter who sees nothing wrong with yanking out a few teeth before he delivers the goods.

Don't worry, though. He gets his. (Let's just hope Trump and his supporters do, too.)

My favourite bit with Wheatley is when he's giving Daniella Pineda's Zia Rodriguez shit, trying to bully her into submission. Uh... nope. She's not interested and quickly puts him in his place (earning a loud "Yes!" from at least one feminist in the audience -- and, yeah, I do mean me.) As Wheatley walks away, he calls Rodriguez a "nasty woman" in a direct reference to Trump. Well, Rodriquez not only makes it to the end but kicks ass along the way so, you know... nasty women getting shit done.

3. Romance
Like Jurassic Park, its fifth sequel has just enough romance to make you care about the lead couple without being overly sentimental. The relationship between Chris Pratt's Owen Grady and Bryce Dallas Howard's Claire Dearing is just too freaking cute for words. They clicked so well in Jurassic World that it's nice that they didn't just abandon the relationship (like they did with Grant and Ellie in Jurassic Park 3.)

Owen and Claire bicker good-naturedly over who dumped who but you can feel the undercurrent of emotion running beneath the laughter. You can hear the unspoken words beneath every meaningful glance they share through the film. My favourite bit with these two, though, is when Owen wakes up in the back of a truck with Claire cwtched up to him -- and immediately pretends not to be awake when she stirs. It's been done hundreds of times in other films and on television but something about the combination of Pratt's cheeky grin and Howard's bashful look make it feel new.

4. The Feels
I don't think I'm in the realms of spoiler here because you know from the trailer that a massive volcano on Isla Nublar is exploding and the dinosaurs are running from their lives. I mean... you know, but...
Whoof. I can't even.

There's no way to express just how heartbreaking it is. You completely forget that they're just CGI. I think this bit is extra painful for two reasons. One, you know that (maybe not in this exact way but) it actually happened. These magnificent creatures did actually die horribly. Secondly, modern animals are dying in their droves every day. If you're an animal lover, I challenge you to watch Fallen Kingdom without getting emotional.

Honestly, if you tell me that you watched the last Brontosaurus lose its battle with the lava without bursting into tears, I'mm'a call you a lying bastard. 'Cause you are.

5. Light, Shadow, and Reflection
Some of the most powerful moments of the film come thanks to cunning manipulation of light, shadow, and reflection. The folks in charge of putting this movie together knew their shit. We're talking true masters of cinematography, here. Every bit of light is utilised to the best of its ability in Fallen Kingdom.

My favourite bit isn't with the shadow of the Indoraptor (shudder), though that is good. No, my favourite is when Isabella Sermon's Maisie Lockwood finds herself face-to-face with the Indoraptor through a pane of glass. The lights reflect the Indoraptor's face over hers, creating the image of a human/dino monstrosity which, for reasons you'll understand when you watch it, is particularly apropos, as well as downright freaky looking.

6. John Hammond
More than one tear was shed at Castle Vanian when Richard (Dickie) Attenborough passed away. Fallen Kingdom's homage to Richard Attenborough's Hammond in the form of a beautiful painting is especially poignant, knowing that we lost the actor just a few short years ago.

7. Symbolism
James Cromwell's Benjamin Lockwood (who we learn is Hamond's ex-business partner and friend) carries a cane topped with a mosquito encased in amber. Sound familiar? Well, in addition to being a nod to Hammond and a reminder of the original films in the franchise, the cane becomes a powerful symbolic tool.

The park has fallen (several times.) The walls that protected us from the living fossils we created no longer stand. At a pivotal moment in the movie, this point is driven home when the cane falls. The amber smashes, along with the past and our expectations. The world we thought we knew is no more.

8. Action
The one thing you can count on when you watch any Jurassic film is action. Come on... you can't make a dinosaur movie without action, right? It isn't just running and jumping and explosions, though. (Don't worry. There's plenty of running and jumping and explosions.) Fallen Kingdom is face-paced and exciting. You're at the end before you even remember to breathe.

I love the fact that Fallen Kingdom has so much dinosaur-based action but it's not just same old, same old. How many different ways can you run from a T-Rex? As it happens, more than you would expect! The action is still dramatic, still original, and still fun.

9. Humour
For a movie that kept me on the edge of my seat with anticipation and had me openly bawling moments later, it also made me laugh out loud. I don't know if you've ever watched a movie with me, but I have a pretty loud laugh. It can be embarrassing if I'm the only one laughing my head off during a movie, let me tell you. Luckily, Fallen Kingdom kept most of the audience chuckling.

While Chris Pratt always delivers the cocky jokes, we have to thank Justice Smith's Franklin for the best bits of humour in Fallen Kingdom. Maybe it's just because I'm a geek myself, but something about Franklin's "Why am I even here?" attitude resonates with me. He has several FML moments and is clearly out of his depth in every situation (even though he manages just fine, thanks very much.) I don't know if this geek will inherit the Earth, but he certainly stole the comic spotlight.
(And Hollywood's scream queens can just move the hell over because Farnklin beats them all.)

10. A New Road
The trailer doesn't even begin to hint at the direction the Jurassic franchise heads at the end of Fallen Kingom. If you think Fallen Kingdom is just more running from dinosaurs and stupid decisions by humans, you're wrong. It gets deeper and darker than you'd imagine.

Foreshadowing is used well enough to give you an idea of where it's all going before you get there so it isn't a what-the-fuck-just-happened moment but it's still unexpected for a Jurassic film. It gives the franchise scope, though, and I can't wait to see where they take it.

I've listed ten reasons to love Jurassic World: Fallen Kingdom, but I can't wrap this up without at least an honourable mention to the dinosaurs themselves. They're more and more realistic every time we see them and, now, we get to see them as individuals. Before we walked into the cinema, the hubs and I agreed that if Blue died, we'd riot because she's such a lovable character. Surprisingly, though, Blue wasn't my favourite dino of the day. That honour goes to the Stygimoloch.

I pretty much squee-ed every time Stiggy was on screen. She's the inadvertent hero none of us expected and she's just freaking hilarious. There's a moment when, after doing her head-bashing trick once too often, Stiggy stops and shakes her head that reminded of something our Sweepy (RIP) once did when he accidentally ran into a brick wall while chasing a ball.

I really can't recommend Jurassic World: Fallen Kingdom enough. It brings the franchise right up to date and gives it a new lease. If I've accidentally given away spoilers in my excitement, I apologise (but you were warned.) I'd love to hear what you thought of the film. Get in touch. Until next time, thanks for reading and get your butts to the cinema to see this movie!
Posted by Wondra at 12:28